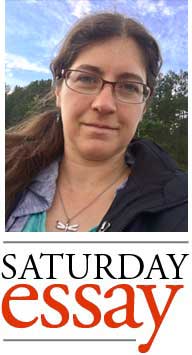 Have you ever wanted to travel back in time? Not to brag or anything, but I have figured out a way to time travel. I can usually manage to go back a few decades, maybe a couple hundred years at most. I can’t stay for long, and I’ve yet to taste or actually touch a cup of tea from 1915, despite a fervent desire. I’m more like a traveler passing through, a tourist in a world different than mine, peering in from the side, presuming to understand what is going on around me.

This world can only be reached through research and imagination, and with the determination of a detective piecing together scraps of evidence. It also depends on helpful archivists, online databases and the support of public grant money and fellow dedicated history nerds. The path is sometimes long and slow, a little bit dusty, but sometimes it pulls us along with the thrill of the hunt and a spectacular find, like a full-on glimpse of faces, journals, conversations and the insides of shops. Tracking down history mysteries is an addicting little hobby.

The recent purchase of a 102-year-old building at 1917 W. Superior St. by the Duluth Folk School led to an off-hand request for more information about the building’s history. I found myself drawn into this request, spending free time browsing 1915 online editions of the Duluth Herald from the comfort of my computer desk, no dusty pages required courtesy of public access grants and diligent scanners. The new owners and I knew some facts, and now we wanted to see what that place had looked like when it was built. I had a hunch some pretty good time travel was possible.

But I also got to wondering: why is this so fascinating for me and for the building’s new owners? Why immerse ourselves in comparing architectural details in old and new photos when we could be learning about the latest celebrity gossip or even the newest mountain bike models? Who cares? None of us are silver-haired octogenarians, the old-school stereotypical history buffs. Maybe it is simple escapism, going to a place and time where my kid isn’t throwing a tantrum or the so-called president didn’t just tweet something stupid. But maybe more than that or basic nostalgia, we are craving understanding, a glimpse of a world somewhat like our own, yet very different, a world that forms the basis of the world we live in now. The old saying tells us those who don’t learn history are doomed to repeat it. I think we are also doomed to forget things that worked, like walkable cities and locally owned businesses. Of course there were other things like discrimination and sexism that should be left behind in the dust-heap of history. Learning some local history can help give a sharper focus on today. How did we get here? Where are we going? Which way should we go?

In September 1915, the “handsome new building” at 1917 W. Superior St. was completed for the Minnesota Tea Company and the O.F. Wennerlund Jewelry Company. It was built by local contractors, for a growing local business owned by the Peterson brothers. The Duluth Evening Herald exclaimed the proprietors “displayed exceptional good taste in the selection of the interior decoration,” including eight large murals of Brazilian coffee plantations and Japanese tea plantations painted by a local firm run by a Norwegian immigrant. The grand opening was attended by 5,000 people who received “handsome souvenir spoons” and were entertained by a local orchestra. The new electric sign outside the jewelry store “attracted a great deal of attention” during the 7:30 to 10 p.m. event. One hundred and two years ago wasn’t really that long ago; in some countries it is a mere blink in a long history. Here, however, it is tantalizingly close and also very different. We can still touch the plaster and lath laid down by those contractors in 1915, but the life outside those walls has changed. There are horrors we have solved, but also new problems have been created. Horses and wagons still delivered tea around town, but the new motorcars would soon replace them, spelling the end of small tea and grocery stores and shaping our current suburban development and downtown abandonment.

Women didn’t yet have the right to vote when this building was built, but would soon get it through a hard won fight. It fascinates me that I can scan the Society pages in a 1915 newspaper just as avidly as a corset-wearing woman might have back then, when I would have been known as Mrs. William Rhodes instead of by my first name. Today, I can wear jeans and have the right to my own name and bank account … which I use to send money to groups still fighting for women’s rights. What can I learn from “visiting” that long-ago era, about attitudes and struggles and success?

I don’t fill my house with actual antiques, but instead clutter up my brain with arcane facts and quaint little stories from a time long past. The 1916 issue of the Spice News that mentions Minnesota Tea Company using porcelain fruit bowls as premiums for purchasing a pound of tea had a thoughtful discussion of the value of using free items like imitation cut-glass bon-bon dishes to attract business — early marketing ideas! This was a time when people didn’t have access to cheap dishes and whatever colorful item they wanted from the dollar store. People like my great-grandparents — tough farmers who still spoke with a strong German accent — valued those free decorative items and kept them in their china cabinets for years. It was a different time, but also a step along the way to our throw-away culture of so much stuff.

Was life better “back then” or now? It was different and it was the same. Now, we have some leisure time, weekends, hopefully a bit of disposable income, and the time to learn skills that we might not need to make an actual living. We have antibiotics and don’t often die in childbirth. We can talk about the “craft economy” and celebrate local stores again for their painted murals and returning some vitality to a downtrodden neighborhood. What can we learn from the past, from gazing in earnest at an old photo of the way it used to be? Some things changed for the better, some things did not. What would Mr. and Mr. Peterson think of the Duluth Folk School, gathering in their old building to teach people how to make their own soap or use a saw? Maybe they would have considered it impossibly twee or even bizarre; doesn’t everyone know how to do that? Or isn’t the new store-bought stuff better anyway?

So much online and informational clutter has been created (or forgotten) over the years, but clear little historical glimpses can still be dug up for us to examine. Does it matter that I know the new jewelry store owner’s wife (Mrs. O.F. Wennerlund, of course, history has not recorded her first name) helped serve refreshments at the grand opening for the Lincoln Park Branch of the Duluth library, one of the last to be funded by Andrew Carnegie for the people in 1917? It does matter; it gives me a small window into a time when the common good was considered at least a fashionable bit of philanthropy, and wealthy store owners gave away silver spoons. It was a time when thousands of people had nothing better to do than gather at an electrically lit storefront and listen to music (remember, there wasn’t even radio in those days, and not everyone owned a Victrola). There were the contrasts of drudgery and discrimination vs. the idea of community and celebration, local control and support.

Knowing a bit of the history of a building also helps personalize a space. Who was here before us? What were they trying to do? Did they succeed? I don’t know if I believe in ghosts, but I believe people’s spirits or essences somehow do survive, and can be a sort of company for lonely history nerds. I spent some of my college summers living alone at an island lighthouse, telling stories of the people who had lived there 75 years before. They were long dead, but I had touched their letters and household items in the museum storage, and it was my job to bring their stories alive for the visitors each day.

I felt like I needed to be respectful to their memories — maybe the lighthouse keeper and his new wife were listening just around the corner. The front porch looked nearly exactly like it had when they were last photographed there in 1923. I actually would have welcomed a ghostly visit, just to ask them for a few insights or answers to questions I could share during the tours. A former interpreter at that site also wanted a visit, but he sadly told me, “They’re not here; I’ve tried.” They might not have been there in any tangible sense anymore, but the memory of them was strong. By reading about them, studying their photos and sharing their historic space, I was definitely touching their time, and started my little side career in time travel. I was also inspired to assume some actual identities and outfits from 100 years ago, but that’s a story for another essay.

I did eventually find that glimpse of 1917 W. Superior Street that we were hoping for, photos of the employees and owners and even a grainy interior photo staged for the grand opening advertisement in the Duluth Herald. We exclaimed over the signage and matching railings, and almost could see those mysterious murals. Matching up an old photo exactly with a current building or place makes time travel all that much easier, more tangible and thrilling. All around us, nature marches on and will eventually reclaim an old field or yard, trees grow, rivers shift. Eventually, an old neglected building could fall down, but sometimes we get lucky and those bricks or brownstone can offer a solid, long-lasting portal into another time.

Humans and societies change often, but through records and archives we can trace things back, reading the layers like tree rings. I admit I can get oddly obsessed about tracing the life of an average citizen who died decades ago, getting excited if I find an advertisement for his optometry business or a mention of his wife at a women’s meeting, speculating about their motivations and ideas. I am going to celebrate this quirky ability to glimpse at a time long past, to be an armchair traveler to a place none of us can physically visit. Facts can be stranger (and stronger) than fiction, and our future could stand to learn from some of these old community facts.

The Duluth Police Department is seeking the public’s assistance in locating Kenneth Jay Gordon. He was last seen on July...