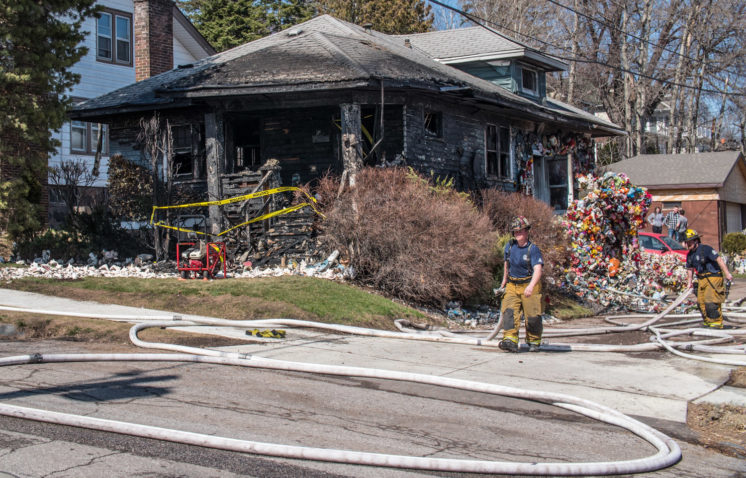 A home in Duluth’s Endion neighborhood, known for the collection of items attached to its exterior, was significantly damaged by an accidental fire today. The homeowner sustained a slight injury.

Shortly after 2 p.m. the Duluth Fire Department responded to the fire at 518 N. 18th Ave. E., deploying a large-caliber hose stream to quickly contain the blaze.

A news release from the department notes there was heavy smoke damage and some water damage throughout the home. Initial damage estimates are $100,000 for the structure and contents.

“Salvage operations were started to try to protect as much of the homeowner’s belongings as possible,” according the release. “The homeowner did suffer some burning to his hair and he was checked out and cleared from an ambulance and firefighters on scene.”

The investigation by the Duluth Fire Marshal’s office indicates the homeowner was attempting to burn material outside his home and lost control of the fire.

In the news release the fire department noted that burning branches, leaves and needles is “dangerous in the springtime and illegal in the city of Duluth, especially with the dry weather we have been having and the massive fire load from the storm last summer that has left many trees down.”

Below are photos taken of the alley side of the home in 2013. https://www.youtube.com/watch?v=7qxI6UUZWCo A look back at the UMD men's hockey team's NCAA Frozen Four battles against Harvard University and the University...