The most common word in graffiti is “fuck.” It often appears by itself — a single word left for others to ponder for decades or else paint over. It is probably meant to express general dissatisfaction with life. An expanded version of the sentiment might read: “I wish to say ‘fuck you’ to every random person who passes here. Such is my anger with the state of affairs in this world and the specific circumstances I deal with in my personal life. Though most people are not necessarily responsible for the things that upset me, I nonetheless hold everyone in contempt.”

It is also not uncommon to see the word “shit” spray painted as a one-word message, which leads me to believe the act of graffiti is often more about exercising the ability to be profane in a public and semi-permanent way than about getting across an idea. At least, I hope so. It seems unlikely that graffiti artists write “fuck” and “shit” as instructions to encourage public fornication and defecation. If they did, they could be much clearer by writing, for example, “shit here.”

There are actual graffiti artists who paint brilliant and thought-provoking murals on concrete pillars, the sides of train cars and so on, but their rebel collages are a bit less common than the scribbled words of the artistically challenged.

It’s quite common to share appreciation for hard rock music through spray paint. Black Sabbath and Slayer seem to be the most popular. Rap and hip-hop are also associated with graffiti, but pop music seems to be virtually unrepresented. One would be hard pressed to find the names Gloria Estefan or Toby Keith spray-painted anywhere. Although spray paint was available in the 1950s, it seems like honoring musicians through graffiti must have started in the late ’60s, since the appropriate music styles were not available before then. It’s hard to imagine “Carl Perkins rulez” or “Nat King Cole kicks muthafucking ass” on the side of a warehouse.

Song lyrics also show up in graffiti from time to time, like: “Break on through to the other side.” Psychedelic sentiment seems to be the most popular. There are plenty of people who express their love for someone through graffiti, but it usually takes the form of a direct declaration — “Matt loves Cammie” or “M.P. + C.S.” — rather than lyric quotations like, “Lady, I’m your knight in shining armor, and I love you.”

More often than lyrics, vandals use a direct message to express their appreciation for rebellion, simply painting the words “smoke dope” or “get high.” Other times it’s just a simple note to let you know that “Brad smoked weed here: 3-21-99.” This graffiti would be more useful if it were written in the future tense. 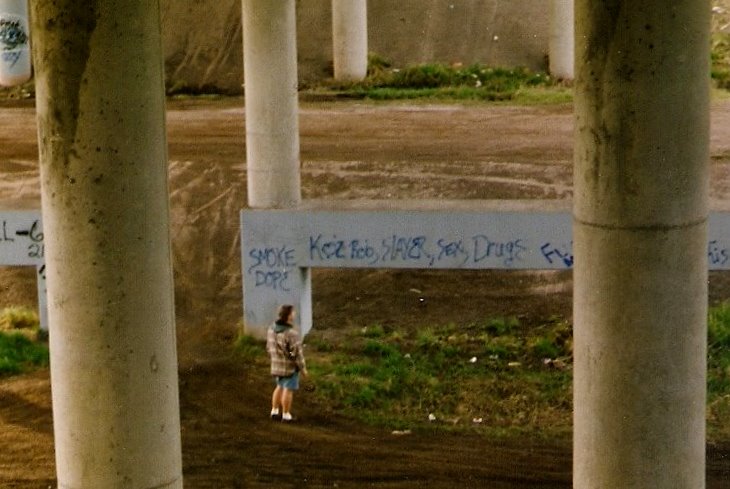 Perhaps these sort of vandals should start painting their bedroom walls with dates, like notches on a bedpost. There would be no fear of being caught by police, so they could be specific, without the need to abbreviate: “Mary Dittburner bent me over the dresser and pegged me with a dually inserted boomerang, Election Day 2008.”

Paul Lundgren is author of The Spowl Ribbon, a book released in 2010 that finally broke even in 2015. Publishing success! This article first appeared in the Transistor.

Duluth's Rachel Kilgour plays the Aster Café River Room in Minneapolis on April 8. She shared the story behind her...