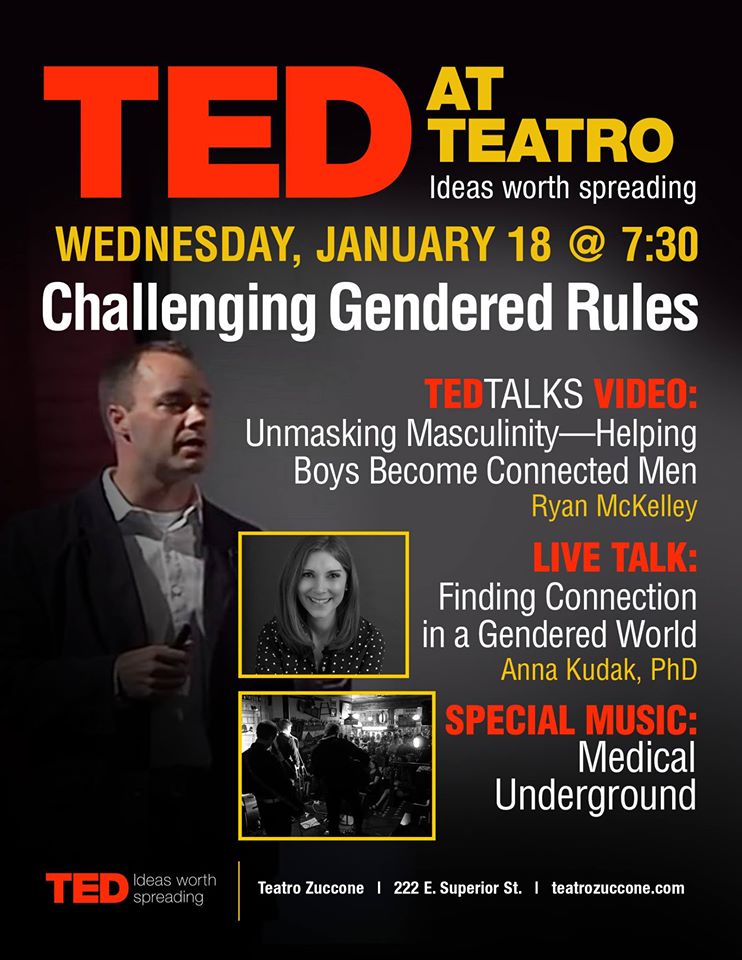 Last night, I went to the TED at the Teatro. This regular event (on the third Wednesday of every month) has both a Facebook Page and a Youtube Channel. It’s the second time I attended, and it’s an event I’d like to return to, even if it had some complexities.

The event is structured with a chatty welcome, last night including an uncomfortable handshake (getting us to meet the people around us, like the handshake in a church). There is a Raymond Carver essay in which Carver reflects on something Tobias Wolff told him when Carver invited Wolff to an event, to meet some people. “I don’t want any new friends. I can’t do right by the ones I have now,” or something more or less like that. If, unlike me, you are into meeting strangers, sure, this was fun.

There was music from Medical Underground. Others, more into local pop/rock music, might chime in on their quality. I found them pleasant. One of the refrains of one of their songs appeared to be something like “We will be okay,” which maybe is reassuring.

Then, we watch a professionally produced TED talk, in this case, one about masculinity:

The recorded talk is followed by a local talk.

I did experience a little cognitive dissonance between the recorded speaker and the guest speaker. Some of it was a kind of misreading of the audience, I think, on the part of the speaker, who believed that an unwillingness to watch Little Women was proof of the persistence of misogyny (I would not watch Little Women for the same reason I never watch any drama set more than fifty years before I was born, without a trace of misogyny in my heart.)

The speaker tried to “trick” the audience by presenting us with deeply sexist texts from 1912 and 2009, asking us to guess how old each text was. But an audience attending a talk about masculinity is an audience primed for feminist perspectives. So the speaker didn’t get the “pop” she was hoping for, the pop she probably gets when she uses that exercise on undergrad students, so I get it. There was a kind of public speaking oversimplification that happens when you are nervous and your audience has beer — ending, for example, with an implication that African-American women earn 66 cents to every dollar earned by white men because they are stuck doing kin-work (relationship maintenance work), without a nod to the systemic racism that layers onto the systemic sexism that lies beneath those stats.

But this is professor-Dave complaining that the talk wasn’t pitched at me, instead of at people in a theater enjoying music and drinks. Simplification was in order.

The larger disconnect between the talks was about the fundamental impulse behind each: The recorded talk emphasized the importance for men in connecting through emotional expression. The in-person talk focused on the importance for women in men sharing the labor of maintaining relationships. These two things are connected, but in ways more complicated than can be spelled out in twenty minutes.

And one of the questioners asked a sincere question, which was is it better to focus on individual micro-level changes (teaching boy-children to send Christmas cards, for example, so that they understand that kin-work is their work, too) or on larger, social-legal changes. The speaker favored the small and local. For myself, I regret that I think that the small and local follows from the legal and social. Segregation didn’t end because generations of children were slowly taught to be open to people racially different from them. The law changed, and eventually behaviors conformed to the norms within the law.

I think. I am working from my family history here, not any kind of historical research.

I don’t know. I’m thinking, I’m thinking. I’m grateful for the speaker and the event that made this possible.

Duluth Police are warning the public about counterfeit bills circulating in the area. Specifically, there are bills with the phrase...