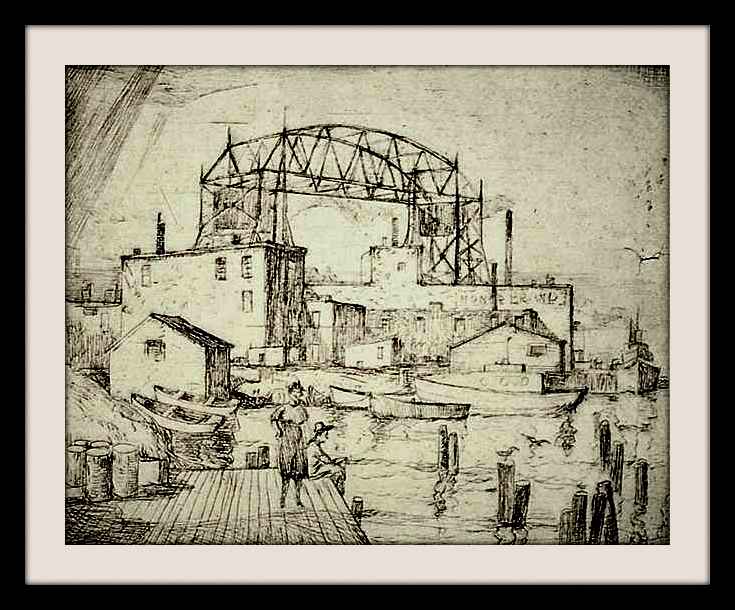 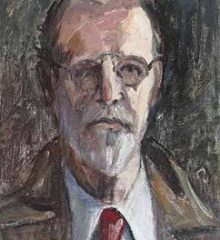 Impressionist painter Knute Heldner lived in Duluth for a good part of his career. The book Minnesota Prints and Printmakers, 1900-1945 dates his etching of Duluth’s Waterfront as “circa 1925.”

He was born in Sweden; differing accounts online put his birth year as 1875, 1877 and 1886. According to Hiro Fine Art he emigrated to Duluth in 1902 and “began working as a cobbler, miner, and lumberjack.” (Askart.com indicates he was a “lumber camp cook” and also notes he arrived in the United States “first in Boston” and later moved “to the Great Lakes region.”)

His early formal training was at Karlskrona Technical School and the National Royal Academy of Stockholm. He continued his art education at the Minneapolis School of Fine Art.

His early art work focused on the manual labor of mining and lumbering in paintings titled Veterans of the Mines and The Lumberjacks. His later work in Southern landscapes including The Cotton Pickers retained a subject interest in the physical aspects of work.

He first exhibited his art work around 1915, when he entered a painting in a Minnesota State Fair competition and won the Gold Medal. In the mid-twenties, Heldner began spending his winters in New Orleans where he painted Vieux Carre scenes and Louisiana landscapes. In the summers, he returned to Duluth, Minnesota. He was an active member of local art communities in both New Orleans and Duluth.

Heldner continued to study art through the twenties and thirties at the Chicago Art Institute, the Academy of Scandinavian Art in Paris, and under the direction of artists David Erickson, Dispieu and others. In 1926, he won highest honors at the Swedish-American Art Exhibition in Chicago, and in 1932 he held one-man shows at the Salon d’Automne in Paris, a gallery in Stockholm, and the Arts and Crafts Club of New Orleans Gallery. In the thirties, Heldner participated in the Workers Progress Administration Federal Art Project in Louisiana continuing to paint landscapes as well as portraits. The New Orleans Assembly of Delphians purchased a Heldner painting Petit Vernon and donated it to the Isaac Delgado Museum in 1937. His paintings also hang in the permanent collections of the Smithsonian Institute, the White House, and the Luxembourg Museum in Paris.

One of the more recognizable hunks of mineral matter in the Duluth area is Sunshine Rock. It's located in Hermantown...