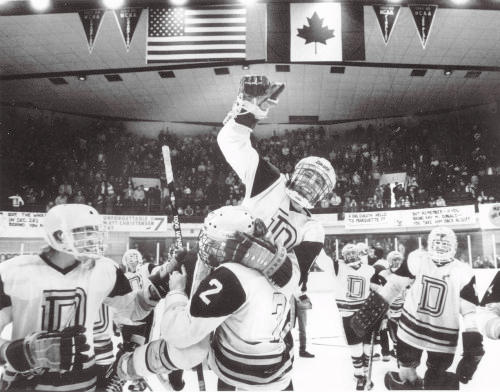 With high school hockey playoffs underway this week, PDD takes a look back 30 years to Denfeld’s first trip to the Minnesota State High School Hockey Tournament. The video above includes TV news clips of Denfeld’s Section 2 playoff wins (2-1 over Duluth East, 8-2 over St. Cloud Apollo and 6-2 over Anoka). The photo at left is from the victory over Anoka, shot by John Rott of the Duluth News Tribune (as featured in the DNT archives).

The second video is a short montage of playoff clips set to music.

Leading up to Denfeld’s trip to state, KDLH-TV’s Ray Higgins reported on the team’s preparation and the excitement in the school cafeteria as students lined up for tickets.

In the first state tournament game, Denfeld topped Bloomington Jefferson 4-2. It is not known who compiled these video clips and set them to music, but it was probably someone from the Denfeld AV squad. Anyway, feel the “Power of Love.” Denfeld lost a 3-1 heart breaker to Burnsville in the semifinal game. Goalie Robb Stauber stopped 40 of 42 shots, but Burnsville got what it needed and added an empty netter to advance. Burnsville eventually defeated Hill Murray 4-1 to become 1986 state champs. The photo of Stauber at left is from the Minneapolis Star Tribune.

A 4-2 victory over Hibbing claimed the third-place trophy for the fighting Hunters. Robb Stauber went on to play for the Minnesota Gophers and won the Hobey Baker Award in 1988. He played in the National Hockey League for the Los Angeles Kings and Buffalo Sabres between 1989 and ’95.

Mike Vukonich played college hockey at Harvard from 1987 to ’91 and was a member of the Crimson’s NCAA National Championship team in ’89. Like Stauber, he was also drafted by the Los Angeles Kings. He played for several minor league teams from 1991 to ’99.

Denfeld was the only Duluth high school to make it to the state hockey tournament during the 1980s, making the trip in 1986, ’88 and ’89. The Hunters hadn’t been there in previous decades and haven’t gone since. 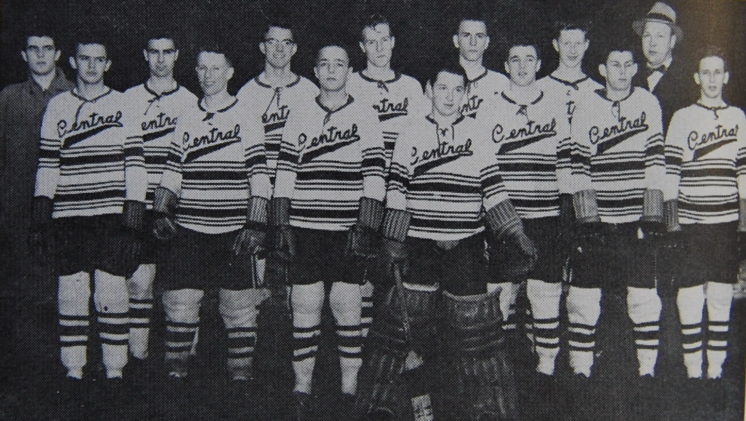 Central was the first Duluth school to make the trip to state. In 1954 the Trojans were shut out by South St. Paul 6-0 in their first tourney game. Central sent one more team to state, but with only minor fanfare. The Trojans had a losing record in 1996, but made it into the single-A (also known at the time as Tier II) state tournament, losing 3-1 to Red Wing in the first game.

https://www.youtube.com/watch?v=wgp6ZnNsw5g New video for a song from the 2015 release Ones and Sixes. Directed by Jim Burns and Beth Chalmers.