From Wildwoods: a heartwarming, yet bittersweet story about people who saw animals in trouble and decided to do something about it. Then, a depressing story, so sad. 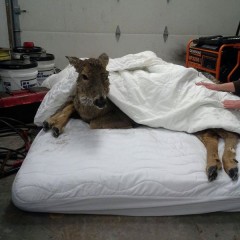 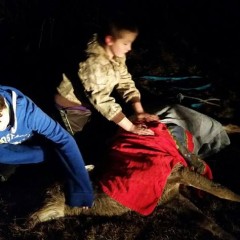 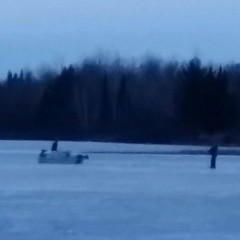 A few nights ago, a family that lives on a lake in rural Duluth saw three deer struggling out in the lake. The deer had fallen through the ice, and they couldn’t get back out again. By report, they’d already been in the water for several hours.

The family decided that they couldn’t just watch the deer die; they had to try to help. So they headed out with their paddleboat. By the time they reached the deer, one had already gone under and not come up again.

They loaded one of the two remaining exhausted deer onto the paddleboat, and put lifejackets around the chest and belly of the other one to buoy her up, as she was really struggling and starting to go down. Then, carrying one deer in the boat and towing the other behind, the rescuers headed back to shore.

After rubbing the deer dry, the family put the exhausted, hypothermic animals into their warm garage on a mattress and left them alone so they wouldn’t become more stressed than they already were. Both deer were in pretty rough shape, especially the one who’d started to intermittently sink below the water. Though it seemed unlikely that either would survive, the family wanted to do everything they could to give the deer every chance to recover from their ordeal.

In the morning, the smaller deer (the one who’d been sinking) was dead. However, the other deer was on her feet and ready to go! As soon as they opened the garage door for her, she charged out and headed back into the woods. Though the family couldn’t save all of the deer, they did save one, and that is pretty amazing!

We are so grateful to this wonderful family for all they did for these deer, and for sharing this story and these pics with us! Thank you guys so very much!!! 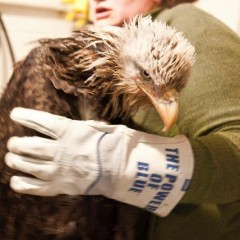 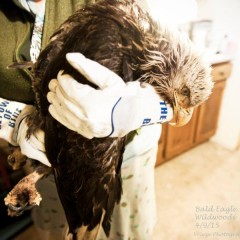 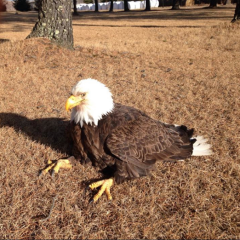 See how the sick eagle below is sitting back on his hocks? This is not a normal posture for an eagle. Also, look at his eyes — partly closed.

We don’t know what is wrong with this eagle or the other eagle recently admitted to Wildwoods. Since most non-injured, sick eagles we get are suffering from lead poisoning, that is our top suspect. There are other possibilities as well, of course, including diseases such as avian influenza. We won’t know for sure until the Raptor Center does testing. Wildwoods is on track to set a horrible new record for sick eagles this year, and it’s only April.

The adult Bald Eagles that arrived at Wildwoods this morning have been transported to The Raptor Center for additional treatment. In these images, you can see that he’s in really poor condition, and can’t even hold up his head. On arrival, he was also lethargic, very skinny, was vomiting, and had foul smelling poop. He looked like he’d been on the ground for a while. He had no obvious injuries. This is all worrisome for lead poisoning. He was also showing some neurological abnormalities.

After we hydrated him and gave him some anti-anflammation meds, he finally stood up on his own. Still, his condition is grave, and his outlook is fairly bleak. We are anxiously awaiting an update from the Raptor Center.

Though it seems late in the year to get eagles with lead poisoning, it’s not. The young eagle from 2 weeks ago had fatal lead poisoning. How does this happen? Eagles scavenge gut piles left from the deer hunt, as well as deer who were shot, not found, and later died. If they were killed with lead bullets, the eagles eat fragments in the meat and get poisoned.

Hunters we know love and respect nature and the outdoors, and we don’t know anyone who would deliberately kill an eagle. However, many hunters are unaware of the dangers lead poses to wildlife (and to humans!).

The best and most powerful action all of us can take to help eagles like this one is to spread the word about the lead and its terrible toll on wildlife. especially eagles.

Lead is not the only poisonous substance that can affect eagles. Last year, we got an eagle with a very similar picture, who was suffering from organophosphate poisoning (a pesticide). Today’s eagle was found near a the carcass of a horse that had reportedly been euthanized with pentobarbital. When animals euthanized with pentobarbital are not disposed of properly (buried deep or incinerated) and are accessible to scavengers like eagles, these poisoned carcasses will cause many needless deaths–of crows, ravens, eagles, wolves, bobcats, and even dogs and cats.

In 2003, the Food and Drug Administration added an environmental warning to animal euthanasia products stating that “euthanized animals must be properly disposed by deep burial, incineration, or other method in compliance with state and local laws to prevent consumption of carcass material by scavenging wildlife.”
Poisonings like this are preventable if we make simple changes to our habits such as using non-lead ammunition and disposing of chemically euthanized animals responsibly. Spread the word!

A big thank you to Heidi and Barbara for transporting this eagle to TRC! (Eagle images by Vrieze photography)
For more info, visit facebook.com/wildwoodsrehab.