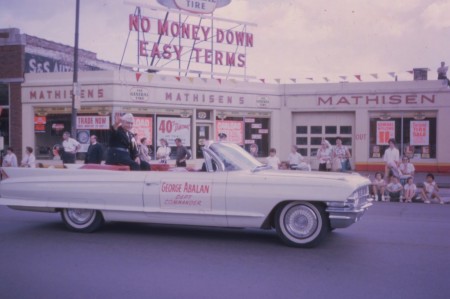 Here’s another photo from the Cliff’s Barber Shop Collection. It’s from the spring or early summer of 1962, and the location is 400 E. Superior St. in Duluth. (PDD all-star points go to the person who can explain what this parade is all about. It might be the Fourth of July, but that’s totally a guess on my part.)

Mathisen Tire Co., “distributors and jobbers of the general tire,” occupied this location from the mid-1940s until about 1980. The business first pops up in Duluth’s city directory in 1940 at 315 E. Superior St., which is ground now occupied by the Duluth Sheraton Hotel. In the early 1940s, MacDonald Motor Co. occupied the spot in the photo. By the mid-1940s, Mathisen moved to the 400 location, listing as officers Oscar Mathisen, Milo Widmark and J. H. Mathisen.

I’m speculating here, but the business was probably pushed out to make way for the I-35 extension that happened during the 1980s, because the spot is listed as “vacant” from about 1980 on, which is when Mathisen Tire briefly operated on Bergquist Road, just outside of Duluth.

Here is what the old Mathisen tire location at 400 E. Superior St. looks like today: 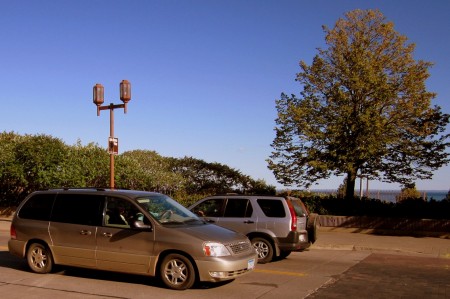 Mathisen Tire at one time had a Superior location at 1711 Broadway St. There are currently Mathisen Tire locations in Hibbing and Virginia, operating under the Tire One banner.

By the way, the guy in the old parade photo who is waving in the car is George Abalan, department commander of the Duluth American Legion in 1961-’62 and a member of Zenith City Post 487. He was born in Duluth, graduated from Central High School, served with the Army in the South Pacific, and was a longtime employee of the Duluth Public Utilities Dept.

There are a lot of great Halloween events going on all week. If you're looking for something to do with...