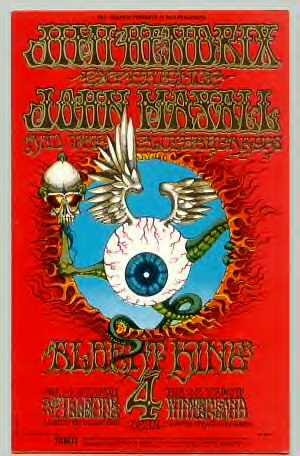 This link — Poster Show — is to the article running this week in the Reader (the website article has many more pictures) that contains information about nearly every poster in the show and interviews with almost every artist. In the article on my site you can read about each poster from the artists’ perspective and how they viewed the art and the era. Print it out and walk through the show!

The earliest poster in the show is from the Fillmore Auditorium in San Francisco when Ken Kesey was still doing his Acid Tests in 1966 there, while the latest poster in the show from 1969 shows when the posters went back to being more formal advertisements. The artists who created the pieces in the Tweed show went on to design the album covers that are so collectible today. Stanley Mouse, Alton Kelley and Rick Griffin are the art of the Grateful Dead that you see on every tie-dyed shirt, bumpersticker, and the band’s album covers. Victor Moscoso is the drippy lettering of the Doors and Lee Conklin is the unusual depth that most people remember from that Santana album with the Lion on the cover.

Concert poster art came first in 1966 and then the album covers quickly followed within a year when the artists moved to that medium after the bands signed record contracts. The Tweed show highlights the extremely rare art by these artists from an early period when they were still figuring out their styles. This is probably the only time in this area where you will have an opportunity to see so many of these unique pieces that are the highlight of modern art museums around the world.

There is the poster from the Monterey Pop Festival that celebrates Jimi Hendrix and The Who’s American debut, posters advertising Janis Joplin’s first shows with her band Big Brother, Grace Slick before Jefferson Airplane and after, Eric Clapton’s Cream at their peak, Bo Diddley, Chuck Berry, The Doors, Jimmy Page led Yarbirds and Zep, and the roots of rock. The posters are just as vibrant and significant as the music they advertised.

The Tweed Museum and I worked for over 2 years to put this show together and I have spent the past year interviewing the artists and trying to learn more about their art. Feel free to email me any questions about the show or the pieces and read up before attending. You can print out the story and read it while you walk through by visiting my website. www.fheads.com

This is a free show and open to everyone. Go to www.d.umn.edu/tma/ for hours and info.

Here is a video from The Playlist describing the show:

Fundraiser for the Epilepsy Foundation of Minnesota

This week at Lake Superior Chiropractic we are fundraising for the Epilepsy Foundation of Minnesota (EFM). EFM works in our...