How I Spent My Summer Vacation in Minnesota with Daniel Johnston, Laura Ingalls Wilder, my great-great-grandparents and a bunch of short-fiction writers There comes a time in every Minnesota man’s summer when he climbs into a rusty conversion van with the love of his life and sets out across the state in search of everything and nothing in particular.

Once the dog and the cooler of beer are secure in back, it’s off we go. 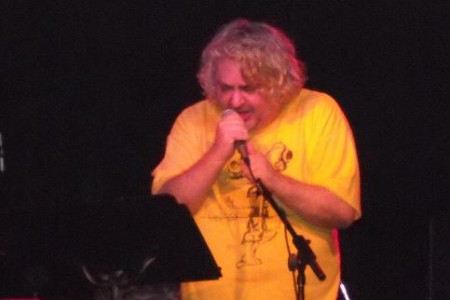 Our trip began with a stop in Minneapolis to witness Daniel Johnston performing live at First Avenue. Alert PDD readers will remember me complaining about TicketMaster when I considered buying advance tickets for this show. The happy ending to that story is this: A chronic PDD lurker felt my pain and used her power and influence to get me on the guest list. It was a great show, and I have my fairy godlurker to thank. The next day we hiked along Plum Creek north of Walnut Grove, where Charles and Caroline Ingalls lived with their family from 1874 to 1876. Their daughter, Laura Ingalls Wilder, wrote a book about her life here called On the Banks of Plum Creek, which was part of a series of books that inspired the TV show Little House on the Prairie. The photo above is of the spot where they lived in a temporary home dug out of the hillside. We also visited the Laura Ingalls Wilder Museum in Walnut Grove and ran as fast as we could down as many hills of tall grass as possible, hoping we might naturally trip and fall on our faces.

At the same time the Ingalls family was in Walnut Grove, my great-great-grandparents were less than 10 miles away in Ann Township. Here they are, Hogan Anderson and Anna Henry. Ann Township is named for my great-great-grandmother. According to the 1962 book History of Ann Township, she was “very likely the first white woman settler in the township.” (Sorry natives, that’s just how things rolled back then with township naming.)

We drove around trying to find the general area of the farm Hogan and Anna settled on in 1868. Maybe there’s a way to find out what specific spot was “Sec. 19” more than 140 years ago, but we weren’t willing to commit to being full-on History Detectives. We know Hogan built a house along the hillside of Dutch Charlie Creek, so finding the creek was good enough for us. The spot we found was marked as the dugout site of Ann Township’s “1st Settler,” Carl Zierke. This is probably near, if not the same place, that Hogan and Anna homesteaded. Zierke doesn’t seem to be mentioned in the book I have, and the section about pioneers notes that “it has been common belief that the first homesteader in Ann Twp. was Hogan Anderson.” Whatever that all means, it was pretty fun to connect in this loose way with my great-great-grandparents, who had both been dead for more than 70 years before I was born.

Hogan and Anna later moved a few miles northeast to Lamberton, where Hogan operated a wagon shop and furniture business. Here’s a photo of Lamberton’s Main Street back then, loaded with wagons during the town’s Corn Carnival. Here’s a shot of Main Street as we saw it. 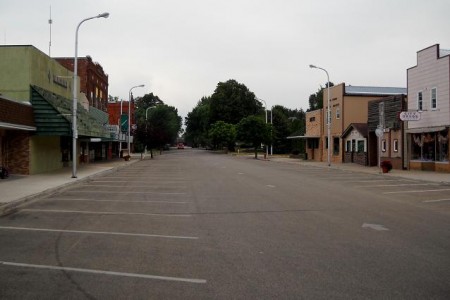 There are no cars because this was shot on Saturday evening and all the shops were closed. Everyone was at Wiley’s Saloon and the American Legion, which are in the opposite direction of the photo. We went to Wiley’s and I asked an old woman there if she had any idea where the old wagon shop was. She said I would have to ask someone smarter than her, and continued to insist repeatedly that she is “stupid,” in spite of my protests that not knowing where something was more than a century ago is not stupid.

Hanging on the wall was a giant pair of underwear. This photo doesn’t offer any perspective on size, so you’ll have to trust me that these tighties are about 15 times as big as a normal pair. I’m sure ol’ Hogan would be proud. We decided not to ask about the underwear, because, really, what is there to ask about? Besides, the bartender’s mom makes excellent salsa, which kept our mouths full.

We stayed at Schreier’s on Shetek Campground and highly recommend site number 8. It’s fun to cook with fire, but it’s more fun to just play with it. We also spent a lot of time at Lake Shetek State Park, wandering around on Loon Island (no loons there) and the various lakes. “Shetek” is Ojibwe for “pelican,” and we saw plenty of those, among other waterfowl. Here’s a shot through the park’s spotting scope at Eastlick Marsh. 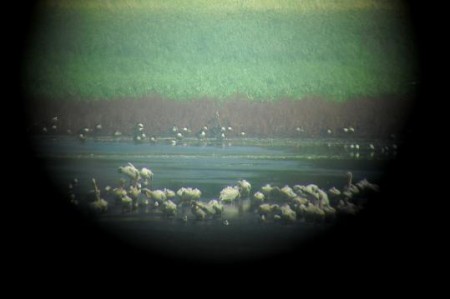 We swung back through Minneapolis for mnLIT’s miniStories Flash Fiction reading at the Ritz Theater. During my performance I photographed the audience. They were as Minnesota nice as they look. In general, people would rather stand in back than sit in front, even for something as harmless as the reading of short stories.

Now that I’m back home and my blogging is complete, excuse me while I part the giant weeds that make up my lawn so I can pick up all the newspapers. I need to get caught up on how this Brett Favre thing happened.