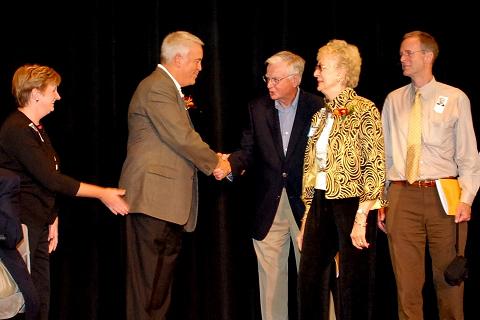 Ten new members were inducted into Denfeld High School’s Hunter Hall of Fame on Saturday. At the end of the ceremony, descendants of Robert E. Denfeld and Walter Hunting were brought to the stage. Although the phrase “Denfeld Hunters” has been around since the 1930s, the Denfeld and Hunting families had never met before. (Photo by Butch Williams)

R. E. Denfeld was Superintendant of Duluth Schools for 32 years, and Walt Hunting taught at Denfeld High School for 29 years, but Denfeld died in 1921, six years before Hunting came to Duluth.

There are more photos from the Hunter Hall of Fame event here.

It should also be noted that Mayor Don Ness (a fourth-generation Central graduate) spoke briefly at the event, urging Superintendant Kieth Dixon and the School Board to resist any urge to change the name of Denfeld High School when Central closes as part of the district’s long-range facilities plan.

Veg Week starts Sept. 29 and we need as many volunteers to help plan the events as possible. Are you...