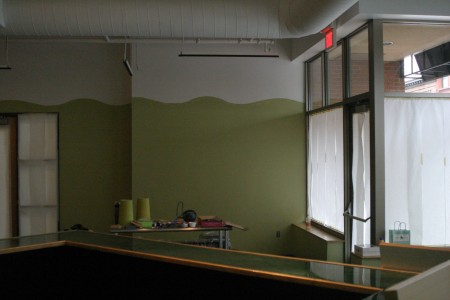 Takk for Maten, the Scandinavian cafe, is tentatively set to reopen May 15 in the former DAC deli space in the Tech Village, on Superior Street next to Pizza Luce. The cafe used to be on Lake Avenue just above Superior Street, until an unfortunate steam pipe incident in January.

Takk for Maten (Norwegian for “thanks for the food”) will occupy the space during the day. At night, tentatively starting in June, it will be home to Kippis (Finnish for “cheers”), a full-service tapas bar.

There has been a lot of work going on, including a newly refinished bar and a brighter look inside; gone is the old dark-blue paint. The photo above shows some newly painted walls – though that green is only the primer. Here is one more look inside: Other Signs of Spring …

Homegrown Week, I know. Homegrown Festival is a sign of spring for many PDDers, no doubt. But for me one...