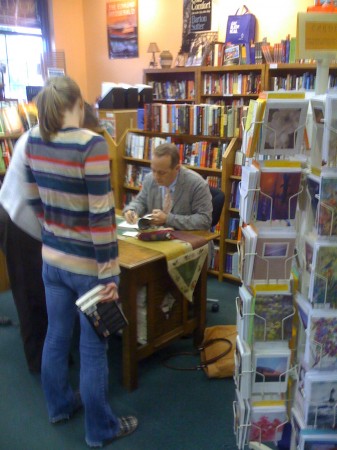 As you may all know David Sedaris was in town last night promoting the soft-cover release of his latest book When You Are Engulfed in Flames. I had the honor of playing tunes for the waiting crowd which finally wound down at 1 a.m.. I don’t imagine there are any authors that stick around until every last book is signed but he sure did. I could have left early but I was hoping to have him record a promo for my radio show, which he did! I also recorded the show on my phone for those of you who didn’t make it out. It is in 5 parts and may be downloaded below.

Thanks again Mr. Sedaris and I apologize for the photo I snapped of you. It was taken before I found out they were not allowed.