The pandemic gave Adam Swanson time to complete 14 paintings of endangered animals. But it also gave him time to think. In this short documentary by filmmaker Mike Scholtz, Adam wrestles with the importance of art, and art openings, in our lives.

This week we hear from one of the area’s most prolific and recognizable painters, Adam Swanson. Adam has an opening reception tonight (Friday, Aug. 5) at the Tettegouche State Park Visitor Center.

A.S.: I work primarily with acrylic paints on tempered hardboard panels. In my youth and studies I experimented with a wide variety of media and techniques. Though I’ve always rallied against specialization, I accidentally grew to love acrylic painting.

Local filmmaker Nicholas Sunsdahl has put out his second film in the past year: “Adam Swanson’s Spirit Mountain Mural.”

It’s about the mural now on display at the Spirit Mountain Grand Avenue Chalet. The mural was produced as part of the city of Duluth’s One Percent for the Arts program, and it’s subtitled in French, because, you know, Quebec isn’t far away.

Getting to know Adam Swanson My quest to network and develop friendships within our local community of artists continues. In advance of Adam Swanson’s upcoming opening reception at the Great Lakes Aquarium later this week, read more about this fascinating local artist here. 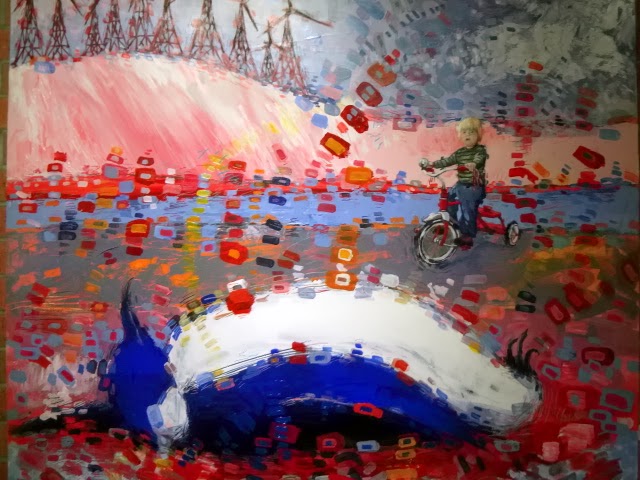 Adam Swanson paintings at the Zeitgeist

Thirty-five of Adam Swanson’s paintings are on display at the Zeitgeist Arts Café here in Duluth for the next several weeks. Last night I caught the opening and found his work as vibrant as ever. I encourage friends of the arts to check it out. Here’s a short introduction to the artist for those who don’t know him. Penguin at the Bar