Stone’s Throw Farm is among primary proponents of the region’s community-supported agriculture — a sustainable food method with the goal to improve economy, ecology and citizen health.

While most food at chain supermarkets and restaurants is produced by industrial farms that outsources production, CSAs generally keep everything in the region.

“It is a really good way to support a local business, and to keep a farmer going,” Stone’s Throw co-owner Catherine Conover said.

Since 2009, Conover and Lindamood have operated their farm on a 40-acre plot of land south of Wrenshall. However, Conover’s agricultural roots run deeper. 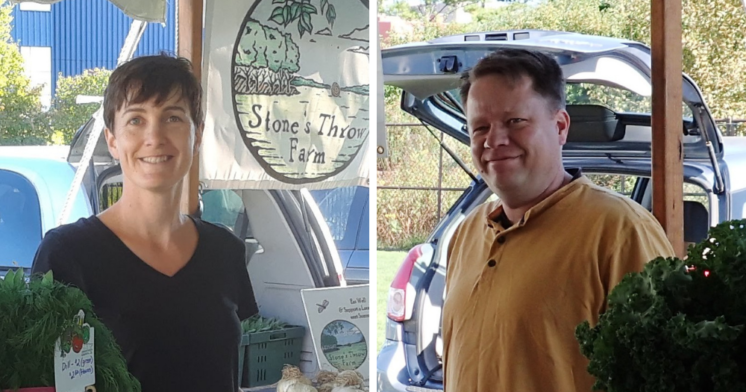 “I grew up on a farm … in Western Iowa. I thought … farming was the last thing I’d ever want to do. But after many years of not being happy with other things … I … came full circle and realized … I actually really liked working outdoors.” Conover said. “I took a 6-month apprenticeship at Caretaker Farm in Williamstown, Mass. … and turns out, I loved it. So, I decided to keep working on vegetable farms, and then I started my own farm.”

On the other hand, Lindamood is an artist, whose “main gig is as an architect in Duluth.” Nonetheless, these commitments never stifle his dedication to the farm. In fact, his construction knowledge helped fulfill part of its ecological mission. Specifically, he designed an energy-efficient home for himself and Conover.

“It is sided, and the windows are designed so that we can capitalize on solar heat gain in the wintertime and keep it out in the summertime,” Lindamood said.

Beyond the house, Stone’s Throw Farm supports the environment on a larger scale through its CSA model.

“Because you know how many CSA members you have, and how much food you … need to provide … there’s a lot less waste,” Conover said.

“We have one delivery to the CSA members every week … on Wednesdays. So, we spend Tuesday and Wednesday, sometimes Monday … harvesting for those CSA shares … I’ll throw those in my little minivan … and head into Duluth.” Conover said. “CSA members offer up their front porches or garages where I can drop off boxes … and folks come to those locations and pick up their shares.”

“The less I use fossil fuels, the better for the environment,” Conover said. “You want to be able to keep using the land … so it’s important to keep testing the soil to make sure that you’re adding organic matter, not just subtracting it … so that in the future, we’ll still be able to produce good vegetables … for generations to come.”

“For the customer … one of the big benefits is that they know who they’re buying their food from,” Conover said. “They can come out to the farm and do their own inspection if they want … some people like to bring their kids … so kids can see what their veggies look like when they’re still in the ground.”

Not only do CSAs like Stone’s Throw Farm foster individual health through trust, but their share-based purchase system also encourages people to try new, healthful foods they might otherwise overlook.

“Sometimes you get produce that you’ve never had before or necessarily bought in the supermarket,” Lindamood said. “It can get you out of your rut, where you … always go to the grocery store and buy the same things,” Conover said.

Although Stone’s Throw Farm is sold out of vegetable shares for the season, an assortment of fresh flowers is still available for purchase.

“I really do what I do because I love doing it,” Conover said. This article was produced as part of a class project at the University of Minnesota Duluth in which students conducted interviews and wrote profiles of people and enterprises engaged in sustainable agriculture.

Another month has come and gone; how much of it do you remember? Test your knowledge with this week's current...