Have you seen Rollo, the Limit? 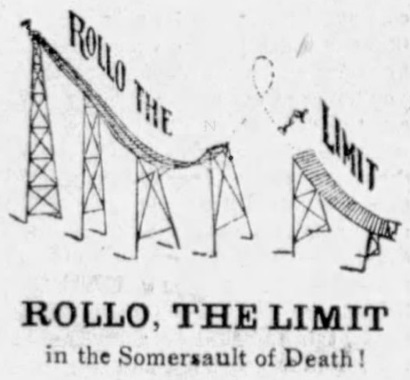 Big names have performed in Duluth in the past — you’ll find prideful mention of celebrities such as Louis Armstrong, Charlie Chaplin and Buddy Holly having graced our grounds with their talents. But alarmingly missing from this impressive list of notables is Rollo the Limit, the roller skating daredevil.

Rollo had mastered his heart-stopping stunt by the time he performed at the White City Amusement Park at Park Point in July of 1906. As described in a later issue of the Belleville Illinois Daily Advocate on July 13, 1908, “On roller skates the daring performer shoots down a chute and reaching a gap turns a complete somersault landing on another chute and reaching terra firma.” It declares breathlessly, Rollo “has one of the most thrilling acts ever witnessed in this city. Rollo will perform his somersault of death every afternoon and evening courting and smiling at death every time he performs the feat.”

This trick wowed audiences across the Midwest creating buzz such as “an actual flirt with death” and “full of danger to the strict letter of the word.” As if this perilous plunge wasn’t entertainment enough, he added a searchlight that swooped over his towering apparatus and added fire to the gap over which he jumped. The Nebraska State Journal called his act the “newest, the most spectacular day or night attraction ever witnessed” and folks from Dayton, Ohio, gushed it was the “most sensational outside feature ever offered.”

So from where did this brave young soul come? What soils brought forth such courage, recklessness, and determination?

Why, those of our own Duluth, Minn.

George Proff, young employee of Marshall-Wells Hardware company, had ambition. Not to work his way up the corporate ladder, not to create a comfortable living from behind a desk. No, he was going to master this dangerous loop-de-loop and win the admiration of crowds, and live his life to the sound of whoops and gasps and cheers. Even before he met his goal, he was causing a stir in town. An article from the Duluth Evening Herald in February of 1905 describes George’s method and touches on the peculiar appearance of the setup.

“Many who had the occasion to pass in the neighborhood of Ninth avenue west and Fifth street during the last three months have expressed considerable curiosity as to a small wooden building with a long chute projecting from one end of it, looking much like an overgrown stove pipe. They have expressed wonder as to what possible use the chute could be put and have hazarded various guesses.

“The building is the club house of the Duluth Athletic club and the chute is the one used in connection with the apparatus of George Proff, who is attempting to loop the loop on a pair of roller skates.

“The loop is built inside the building, and the skater starts at the top of the shoot and comes down through an opening in the wall. The chute is enclosed so the skater can practice in cold weather, and it is lighted by lamps. The January 13, 1905 Gazette of Montreal, Quebec continues. “He will begin [the circus circuit] as soon as the loop is completed by starting a short distance up the incline and covering only a portion of the loop. This will be steadily increased until he can reach the top, when he will be assisted by young friends, who will manage a net below, as a precaution against a fall.”

He stretched his limit, and he may have also stretched the limit of distress of his friends who held the landing net, and maybe this was the joke in the professional name he adopted. His dauntless persistence worked and he nailed the loop sometime in early 1906, using skates he designed himself that had 10-inch wheels and weighed 27 pounds. The news of this incredible accomplishment spread across the country, reaching people from Minnesota to California to Kentucky. “Have you seen Rollo the Limit?” was the cry across cities where he performed, with entire audiences holding their collective breath as he eventually reached speeds of 70-miles an hour (declares one newspaper), then somersaulting over a gap of 20 feet and landing on his feet to the “thunderous outburst of applause he receives at every performance.”

In 1908, he missed the second platform and landed on his head, knocking him unconscious and he was assumed dead. In an interview a year later he was said to have had every bone his body broken at some point and had been in 22 different hospitals. But he said he couldn’t stay away from the sensational life.

Having spent one’s glory days being hailed as the only one who performed a particular death-defying feat to the breathless appreciation of audiences hopefully carried Rollo proudly through his later years when certainly the multiple bodily injuries caught up with him. The last article found about his performance was in 1914 and it is likely around that time that he went into the grounded business of refrigeration. It’s worth noting that home refrigerators came out around 1913, so this could have still meshed well with his craving for sensation.

There are statues in Duluth recognizing other men who sought their glory through traditional means, glory achieved through railroads or mining or investment. But there is no monument to the man who set his sight beyond the mundane, who soared above the ordinary, and who embraced the uncommon. We’ve perhaps lost our appreciation for the daredevil, but we can appreciate that the roots of weird run deep in this precious town, including the appearance of an overgrowth stove pipe on Fifth street in 1905, and a man with a plan.

https://www.youtube.com/watch?v=LD1_Pfev5Vg Duluth's Charlie Parr is the featured artist on the first episode of Dissonance Sessions, a video series that is...