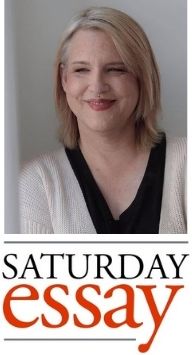 For as long as I’ve been writing, and that’s been for about twenty years or so, reader, I’ve made my contact information available for people to reach out to me with questions and comments about what I write.

A couple of months ago someone sent me a message through Instagram saying that I have privilege because I can pass as a cisgender woman and also asked why I haven’t used that privilege by being more visible in the trans community. I take every question seriously—well, all the serious ones, at least, so I’ll take my time here to answer.

Passing is complicated. Even the word is complicated. I don’t use it. I blend. And there was, of course, a time when I didn’t. Being misgendered hurts. And there are trans women who are routinely misgendered throughout their transition and I’m acutely aware of that because of my own experiences early in my own transition. Is there privilege in blending? I suppose there is. Does it make my life easier? Undeniably. When I’m out in public, my identity as a woman is not questioned or rebutted at a restaurant or at a grocery store, at the clinic or anywhere I go. It gives me access. It gives me peace of mind.

It didn’t just happen though. It took surgeries, months of hormone therapy, clothing choices, professional voice therapy, and just a touch of the genetic lottery. But the real question is—does it really matter? If I blend in to cis culture, does that make me less trans? Does it make me less an advocate? What am I supposed to do about it? Stop being blendable to be more trans?

Does blending in make me safer? No. It doesn’t because no woman, of any kind, is safe wherever she is or wherever she goes. And I’d argue that a trans women who blends is only as safe as a man decides. No matter how pretty you are, the minute a man decides you’re a threat or the minute the wrong man clocks you, it’s over.

Queer people are othered and compared to the majority culture all day, every day. Femme lesbians are accused of dressing for the patriarchy. Femme boys are marginalized in masc for masc dating apps. Trans women who pass for cisgender women are said to be privileged. Who wins in this game? The majority culture of those who wish to continue to divide us. It’s time to end this thinking.

As far as my activism? As long as I’ve lived here, even when I was presenting as male, in my twenties, I’ve leveraged every skill and talent I’ve had to better the lives of queer people. I led Duluth Superior Pride through its most challenging fiscal crisis in 2002. I led the Northland Gay Men’s Center, implementing HIV/AIDS education into all programming and handing out more condoms and lube than I can calculate. We even started the first trans support group. I spoke on college campuses. I worked with the Duluth City Council to write the city’s first-ever pride proclamation. It’s been the privilege of my life to be an activist in all the ways I can be. Most recently, I worked with the administration of Essentia Health on trans-positive policies. I’m content to work behind the scenes and I need no fanfare. I’m a policy nerd.

There are all kinds of trans men and trans women. Some of us blend. Some of us do not. All of us are valid. And there are lots of ways to contribute to activism and visibility … but understand that none of us are obligated to be activists or to live our lives being visible to the people around us. Something to think about.

The Institute for the Study of Light and Water

The Institute I am the founder and only member of the Institute for the Study of Light and Water. In...