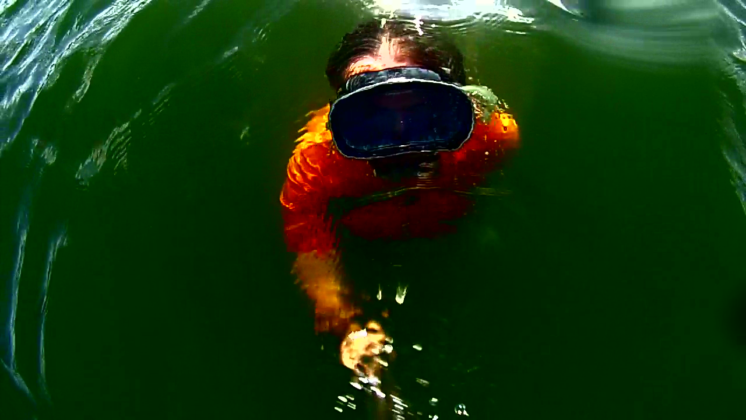 When joining Perfect Duluth Day’s “Saturday Essay” roster, I was asked for a headshot and I submitted this which accompanies my essays. It is a video still from an old GoPro on a stick. The camera has broken through the water, and my face is about to break the surface. Water depth @ 20-30 feet, off the sand beaches of Park Point. It was late summer and I wanted one more batch of diving photos in my Aquaman colors.

I am wearing an orange Aquaman t-shirt with a fishscale print, canonically green swim trunks, flippers, old-school dive mask which accommodates my kingly facial hair, and no snorkel as I am freediving and don’t really need it. Going without a snorkel is a way of working on my breath hold. Plus I read a thing about someone passing out underwater with a snorkel in his mouth, and so I’m fine. I swim around in maximum 30-foot depths with flippers and usually a wetsuit now, a loaner from a friend. I developed a certain cold tolerance in the service of getting the shots I want. But the water was as cold that day as I was able to bear without even a thin wetsuit on. These days I wouldn’t do it without one. But I was feeling hardcore and swam out to sea.

A 20-30-foot depth is a dilletante’s depth among actual freedivers. I’m just a recreational enthusiast with a cosplay fetish and a waterproof camera. Water clarity wasn’t great but I could see well enough down there, expanses of rippled sand rising to meet me.

The rock beaches off the Ledges have fields of submerged boulders and reliable encounters with aquatic life; almost all of my Duluth fish shots are from the Ledges. But this was Park Point and so it was just plains of sand like a desert, the deep beach. I considered myself an explorer while one hand filmed myself doing everything.

I found a tree trunk with a frisbee wedged under it. It was a flying ring thing. That was pretty far out there, kinda just where a flying ring would be if someone on the beach said “Fuck it” and threw it out to sea as hard as they could. The toy sank in 25 feet of water or so, blowing around until it wedged against a log also blowing around down there, but more slowly.

The frisbee picture was taken during the same swim sesh as the headshot. The green hues don’t match because the camera is out of/in the water respectively. Sometimes the lake is green but it changes colors according to epicycles of currents, wind, precipitation, and cloud cover. The lake is sometimes blue with perfect clarity, sometimes reddish with silt and low visibility, sometimes green with algae with visibility in the mid-range. That day was green and very cold. Wind was below 10 miles per hour. I forget the wind direction but I track it daily because the lake and I are one.

I always have a camera on so I don’t miss a single fish encounter, or any other treasure. I still have the flying ring. Although this old photograph is labeled "Duluth Harbor," it's not what we think of today as the harbor. Based on...