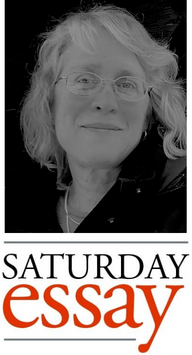 Split Rock Lighthouse stands along the western shore of Lake Superior, atop a soaring cliff. Dressed in cream-colored brick and elegant trim more fitting for a grand house in a genteel neighborhood, it once worked as a watchman holding a luminous light, warning ships about rocky shores at its feet.

It’s a crisp late-October morning. The last day of the season before the lighthouse shutters for the year. From an expansive autumn-blue sky, sunshine washes the landscape in gold. The temperature wanders just north of forty-five degrees. The air breathes softly.

My granddaughter, six, and grandson, four, are with me. It’s their first visit to the lighthouse. Because it’s a weekday and almost the last day the lighthouse will entertain visitors for the year, we are nearly alone on the grounds.

We climb the twisting steps of the lighthouse, just the three of us. We are quiet, and with nothing to arrest my attention, other than the shuffle of feet on the stairs, I travel decades back in time.

My father, my sisters, and I climb the stairs. My father has come to see the Fresnel lens, and we are his pupils. Some of his words wend down the tower: France, prisms, refraction, illumination, fog, storms. But his lesser words are swallowed by the voices of other tourists. His face points up toward the lens; my sisters and I are in tow behind him.

My granddaughter leads the way, followed by my grandson, then me. I’m the caboose, better, I think, to catch them if they slip. I’m not interested in touting the wonders of the Fresnel lens. I leave them to their thoughts as they ascend the stairs, and I return to mine.

At twelve, I’m content to let my father’s explanations about the lens waft past my ears. I imagine the lightkeeper climbing the stairs during a howling storm to ensure the beacon shines across roiling waves of the frigid lake. I fancy the lightkeeper manning the signal house to ensure the horn bellows over icy waters while dense fog unfurls across an eerily still lake. I remember my father’s words about Lake Superior, mostly spoken to my frightened mother as he would fly us over a corner of the lake, “You’ll die of hypothermia before you’ll drown.” I ponder the number of sailors the lighthouse spared from freezing to death before they could drown.

Sometimes my father is a martinet. My siblings and I endeavor to read his barometric pressure and side-step his thunderclouds. We learned early to listen carefully.

He’s an extraordinary mechanic. His hands tinker, build, tune, modify, rig, experiment, adapt. Cars, trucks, motorcycles, planes, appliances. All engineering feats, great and small, captivate him. He wants us to be enthralled. But my fascination is for the people who lived and worked at the lighthouse on the prodigious cliff. I crave the stories of people. Lake Superior, which, if it had the chance, would freeze me to death before swallowing me, enchants me. My father doesn’t notice my attention has wandered because he’s hammering the tour guide with his knowledge of the brilliant lens. “Oh, wow,” my grandson says, exhaling the words as a brief, but reverent Gregorian chant. He’s caught his first glimpse of the Fresnel lens gleaming in sunlight spilling through the windows. He stops and stares. The echo of his chant swirls around the tower.

Years ago, my father expressed his amazement of the lens with descriptions of its design and function. My grandson captures his admiration in two words. But at this moment, although they’ll never meet, they’re tethered together across four generations, both of them mesmerized by a triumph of engineering designed to mitigate the angry moods of the lake. I see my father through the eyes of my grandson’s wonderment, and he becomes a curious four-year-old boy, instead of an ill-tempered adult. And I ponder what he might have said about the enormous, glistening lens had he seen it as a four-year-old boy. Their shared veneration softens prickly memories of my father. I can’t picture him as a little boy and be angry with him at the same time.

With the massive lens above me, I stand at the top of the lighthouse, peering out at Lake Superior and hear my father’s voice, She’ll freeze you before she’ll drown you.

Victoria Lynn Smith loves living near Lake Superior, where she recently started paddle boarding. She writes fiction, essays, and articles. Her dream is to one day visit the Shetland Islands. For more visit writingnearthelake.org.

Here's a look at a pair of East Fourth Street buildings -- one soon to be demolished, another already lost...