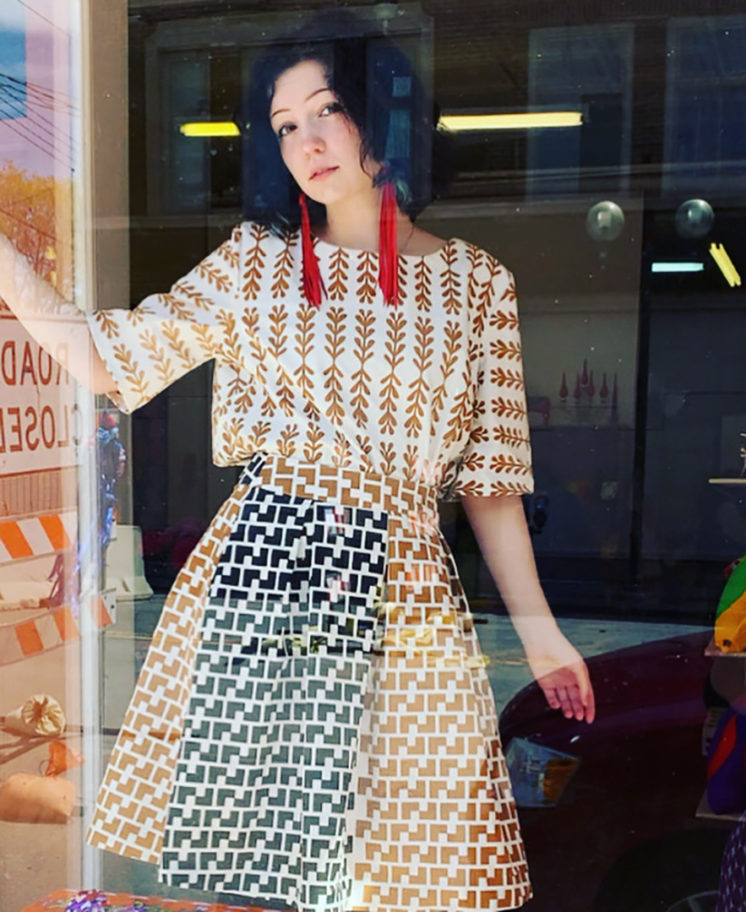 Kirsten Aune has lived in Duluth for a number of years, working in textile and garment design. She has a fashion show upcoming in her new showroom, Kirsten Aune Textiles, at 12 N. 21st Ave. W., in the heart of our blessedly reviving Lincoln Park Craft District. It goes down July 17, with two showings, one at 4 p.m. and one at 5 p.m. Most of the fashions being shown will be for sale or can be custom ordered. Mary Mathews, a master sewer, will be modeling her own creations out of Aune’s fabric. The showroom is stocked with household items as well as clothing, and Aune notes that you can order custom printed fabric by the yard there as well. 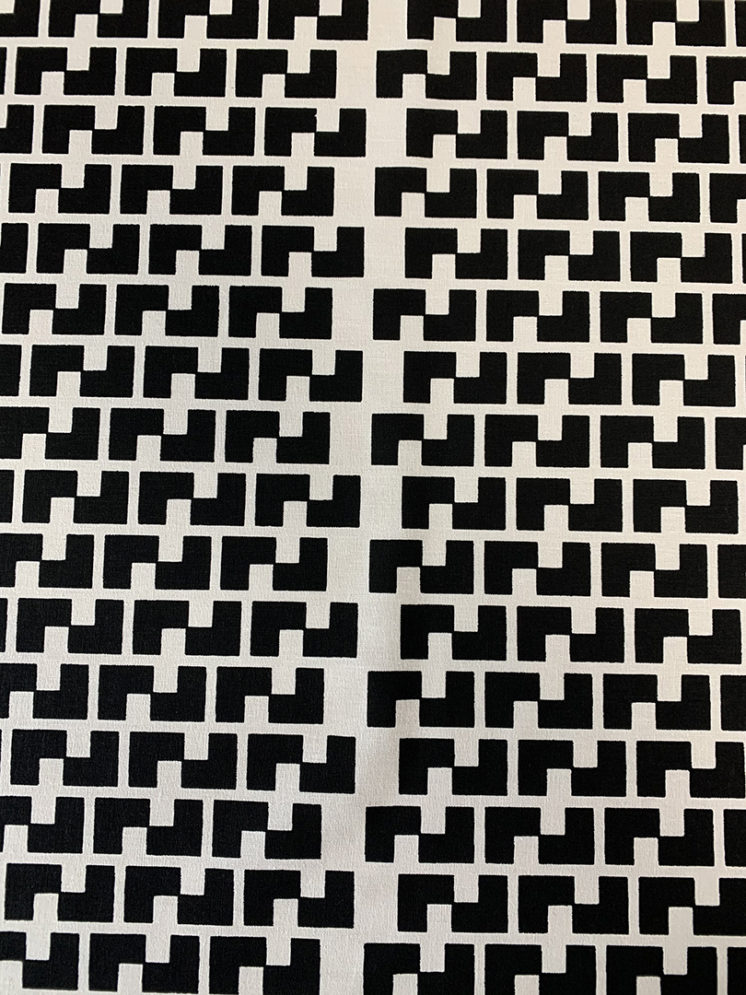 Here’s Kirsten talking about a life in love with pattern and design:

How did you first get into this kind of work?

My childhood was heavily influenced by fabric. My mother was an avid sewer. Her mother (my grandmother) hit the ball out of the park with her details in apparel and quilts. She made each of her children king-size cathedral-windows pattern quilts, hand quilted.  I loved looking at the different fabrics within the diamond folds. She would sew for neighbors at night to earn extra money; her husband died when her children were young, hence she was a single mother during the Depression. She must have accumulated various fabrics from this work. She made all her children’s clothes

My mother made most of her own clothes, and many of mine and my sister’s. She also made our toys, often matching garments she made for us. My mother brought me to many fabric stores as a child. I must say I was bored out of my mind then, but boredom can ignite creativity. My mother never taught me how to sew but I was allowed to use her machine. When I was on my way to college she gave me a small Singer sewing machine which I brought with me as I moved about.

As teenagers, my best friend and I would cut up clothes and alter them, making our pants straight-legged, fashioning skirts and dresses. We scoured rummage sales and I began to collect vintage clothes and fabrics, Marimekko being my favorite.

I went to the School of Visual Arts in New York City. I painted on paper with oil sticks and Craypas. My works were a whirl of patterns. The figures were life-size, always wearing crowns, and rhythmic dresses within dreamy environments. Misha’s Coffee House in Alexandria, Vir., purchased some of these a few years back, and this year, opening a second location, purchased many more of these vintage works. The figures from these paintings are the roots of my garment making. 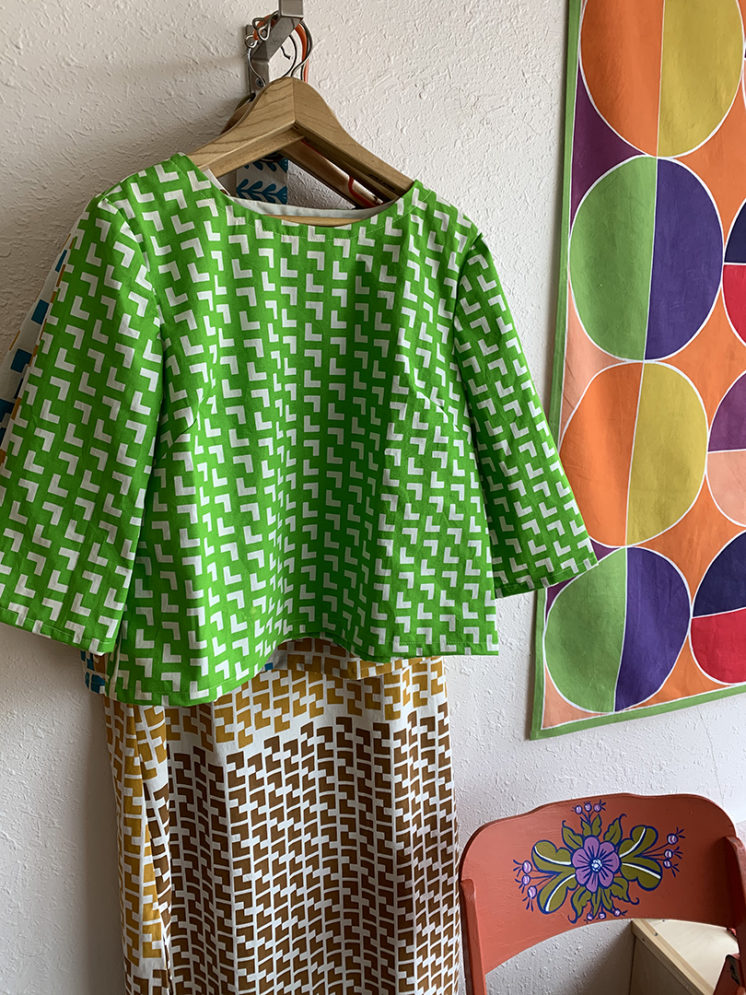 What sparked my textile work and fashion happened soon after I graduated from college. I was shopping for ties with a good friend, we were looking at the fabrics and each leaning in opposite directions. My mother sent me a tie pattern, and I instinctively went to Pearl Paint in New York City (now sadly closed) and purchased Deka textile paint. A professor had told me during a critique, you don’t always have to have your figures in the work, the essence can be there without them. I was also encouraged to work in 3D with my patterns. These influences led to a series of large wall-hangings and suits for people to wear. When I see my designs on people, my art sings.

I worked at the Museum of Modern Art in the 1990s after graduating from college and made ties for all the male “information desk” workers. It was a thrill to see them wearing them. 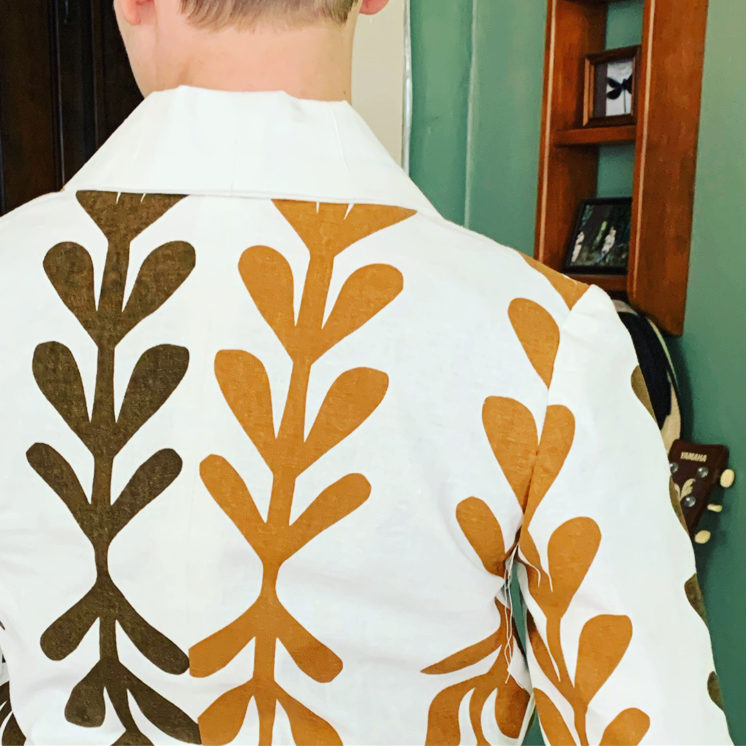 Do you have any major influences in your work? Who are they and what do they do?

My first inspiration was Sonia Delaunay! I just picked up the book which was gifted to me in 1990. She was a Russian-born French painter, 1885-1979. Inspired by the Modernist movement, her work spanned theatrical sets, interior design, book making, and fashion, making art a part of daily life. I would stare at the black-and-white photos of her pocketbooks, silk scarves, vehicles with her designs, geometric garments and her Parisian storefront showroom. I also was inspired by Sol Lewitt … and Bridget Riley, a favorite! Also Frank Stella, whose studio was next to my first apartment in NYC in the West Village on Jones Street. I would rummage through his dumpster and find treasure troves of paper. Alexander Girard, Aase Gernes and her husband Poul (when she married him she “stopped” working and worked with him on his work). I first saw their work in Copenhagen. Traveling to Sweden I became familiar with Josef Frank, went to the printing studio of Jobbs, and in Finland Marimekko! In the past few years I met Gudrun Sjoden, a Swedish textile artist. Her combos of alternating colors and patterns inspired some of my current fashions. 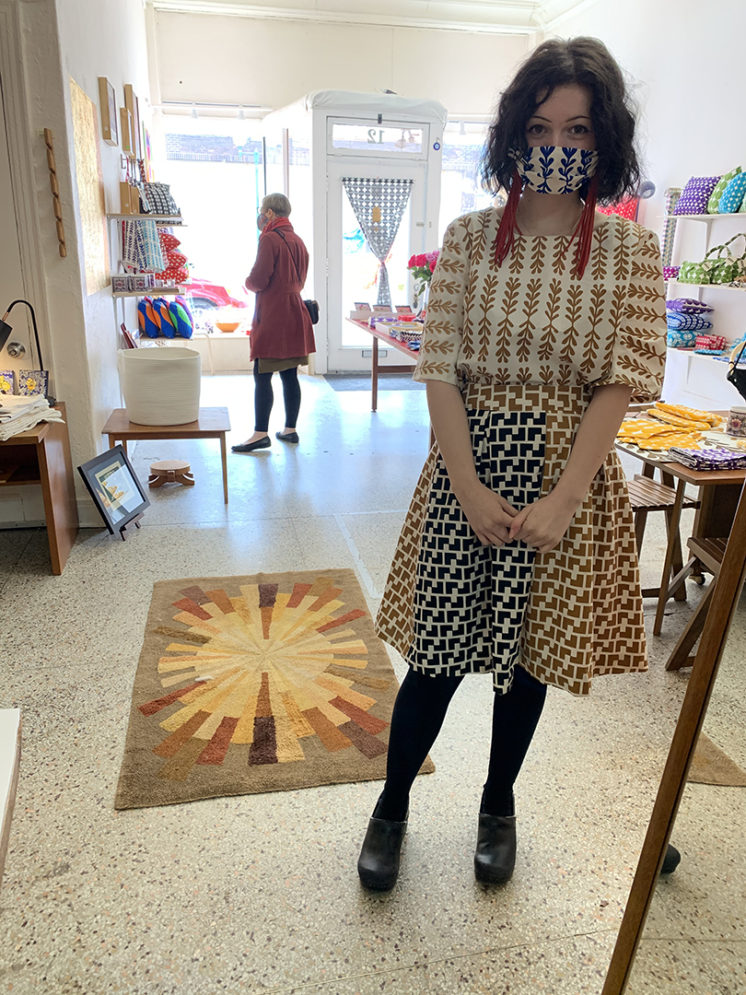 What is “Duluthy” about your work? Would it be different if you lived elsewhere?

I moved here 28 years ago. At the time, however, I had a hard time selling work and felt that only if I painted lighthouses, loons, or the Lift Bridge could I make an income. I have traveled, exhibited and taught in some of the Nordic countries, which has influenced my textile design. My parents collected modern Scandinavian furniture; that aesthetic has always spoken to me. There is an appreciation and revival of Scandinavian-inspired contemporary design here in Duluth along with mid-century modern. I feel that I fit in now more than I ever have in the past. 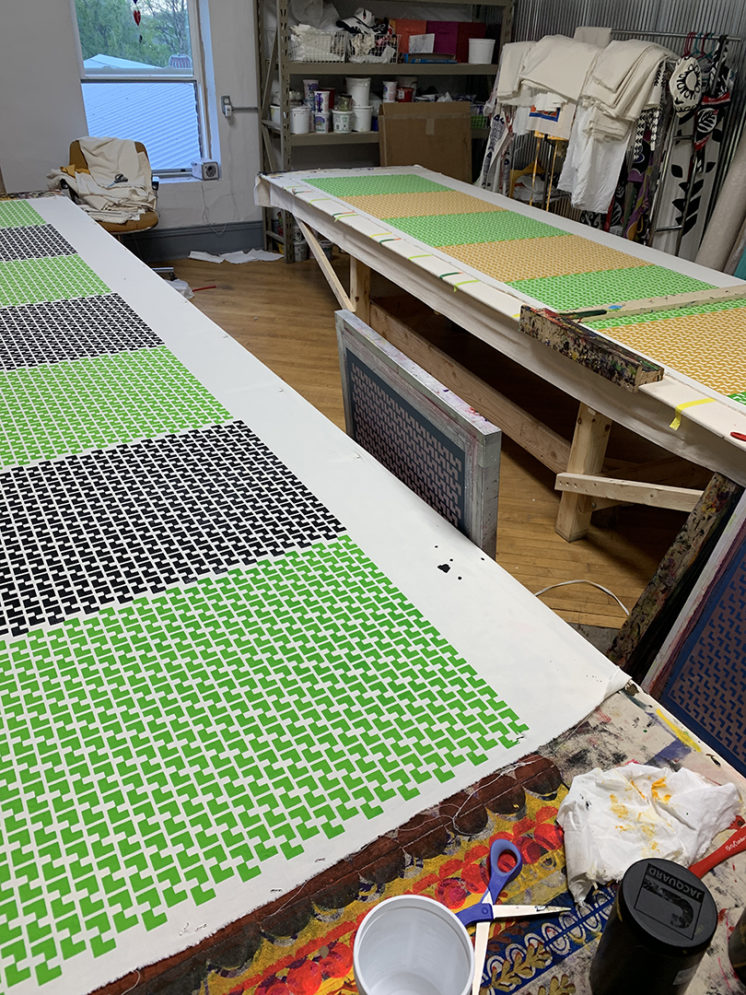 It can be difficult for working artists to find the time and space to work. Can you go over, a little, what you’ve done to solve these problems?

I have great space now but still occupy my kitchen table for most of my sewing. I have worked in spaces with no heat, off my bed with a wall two feet in front of me where I would tack up canvas, I have had sympathetic landlords who have given me deals. I also lived in Washington Studios apartment for ten years and had a live/work space. A few years back I contacted Mayor Larson because it was very hard to find affordable studios. I have been very vocal and searched for a long time until the stars aligned with the space I have now.  It still is very hard, very unfortunate and I wish that our culture would embrace artists’ need for affordable space or free workspaces. Time is always an issue as well, time and money! I apply for artist grants and have a few patrons who help me out. I opened Kirsten Aune Textiles in Lincoln Park last Halloween and focused on affordable merchandise. This has helped along with COVID. I was laid off, received unemployment, and lots of time. A lot of artists devoured this time to create as did I to the max! 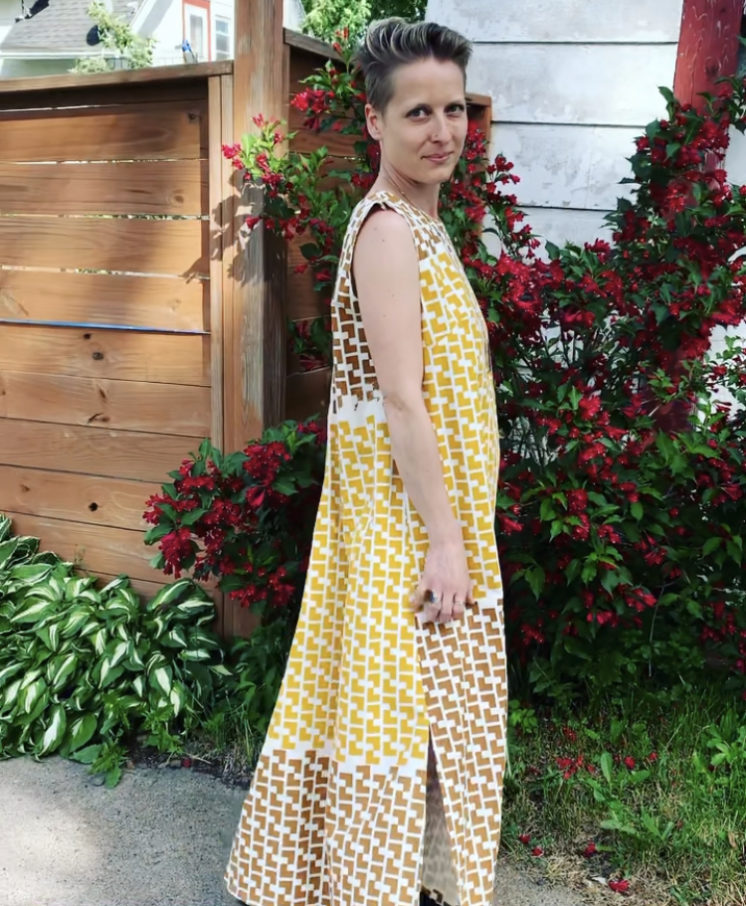