Shaun Chosa created a group of images to be wheat pasted on the wall at AICHO — seen here with some of the folks who helped make it happen.

The American Indian Community Housing Organization, which has become a force for enabling Native voices in Duluth and bringing radiance to the city, worked with In Progress, a multi-media arts organization in St. Paul, to create this installation of Shaun Chosa’s strong images on the walls of AICHO’s headquarters, 202 W. Second St.

In Progress has been working for years to enable artists to do wheat-glue art postering. Ivy Vainio, who took all the photos in this post, said AICHO has contracted with In Progress “to help teach us how to do this application so that we could share Indigenous artwork 24/7 with our community. Michelle LeBeau came up with the concept for the outside of the Dr. Robert Powless Cultural Center building. We plan to continue to do this with other AICHO artists.”

Wheat-glue posters are a time-honored method of bringing art to the streets: Chinese “big-character posters” and German anti-Nazi posters were also done with large prints and wheat glue; during the 1960s and 1970s wheat-paste posters were also popular guerrilla artforms. 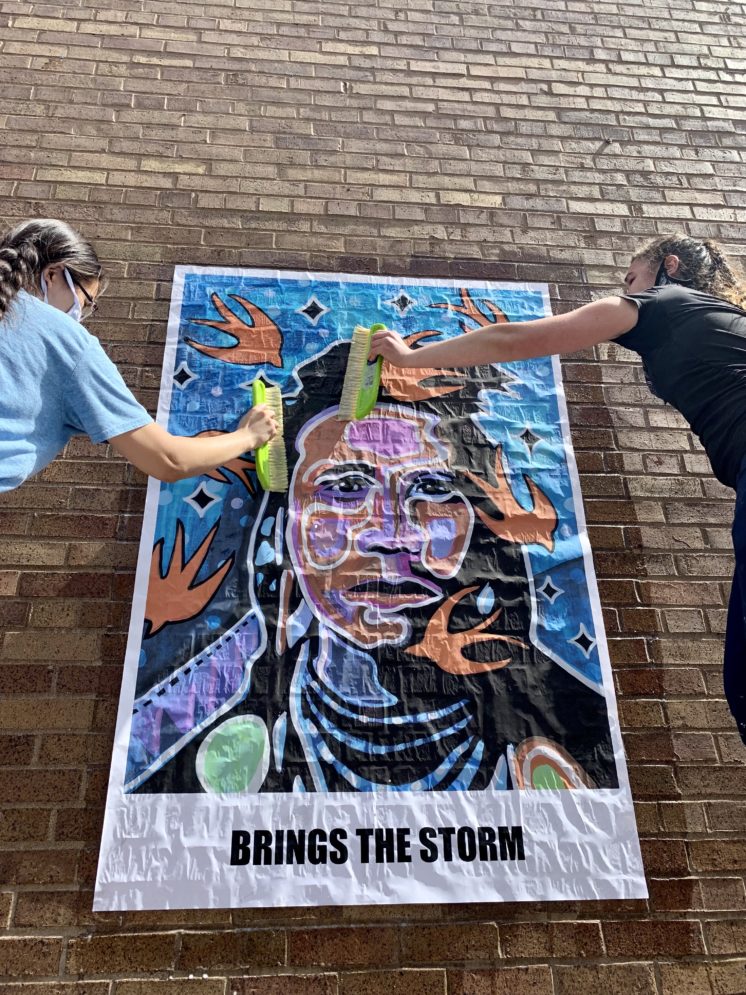 Applying the poster to the wall. Shaun Chosa’s descriptions of the works

Survivor II: This painting was painted and it’s about the MMIWG issue that is plaguing our people. That is the obvious theme. The red hand print, a warhorse decoration that has been swapped in to symbolize the issue. I stopped at some point wanting to keep the image more accessible. The white spots on the dress are usually shells or caribou teeth. Here I imagined them as skulls originally and metaphorically still do … each skull, a life lost or missing. Skulls are metaphorical devices, not evil, just representative of death, and both mortality/immortality. The woman has streaks of grey in her hair, she has faced stress, has the wisdom of years and carries with her the memory of those missing, enslaved, killed, and lost. She is a survivor.

Brings the Storm: A portrait reinterpreted with color. The orange birds are iconic symbols in my work, it’s part of my lexicon, I suppose. Symbols, coded language. They represent the birds fleeing before the coming storm, and in that storm often come the Thunderbeings.

Water Protector: Painted after photograph of Autumn Peltier, Ojibwe water activist, spokesperson for the people and environment. A role model. One of our people across the border to the north.

Rainbow Warrior: Painted after a sepia-tone Curtis photo. I love these works but I reinterpret with more color. The title is a play on words and also the name of an ocean-going boat that fights for sea life. My titles are littered with allusions and direct references or stereotypes.

It started about five years ago with an ordinary stomach ache after eating late and poorly — a speedy meal...