Perspective: A Review of Decennia by Jan Chronister 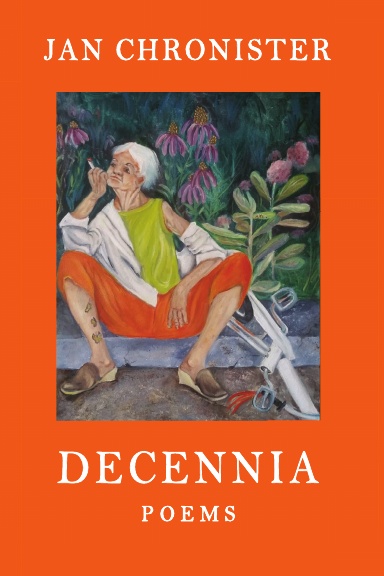 Unforgettable things happen to us. Those pivotal events take on new meaning with the passage of time. Jan Chronister looks closely at those events in her past in her latest collection, Decennia (Truth Serum Press, 2020). The title means “decades.” Chronister splits her life into five of them and examines each in detail.

Chronister balances brutality with humor, much like life. She doesn’t look away. She describes the childhood impression of her grandfather slaughtering hogs in “I Never Eat Strawberry Sundaes.” In “Fishing” she proudly displays a stringer of fish she caught, but

My dad executes the fish
with a quick whack

She reports this when her fish is served to her to eat:

That’s when it stopped being fun.

But, you’ll have fun as Chronister makes you laugh with poems like “Self-portrait as a Tea Kettle” and “Encyclopedia.” Time moves on. Major events in each decade land hard, like when she witnesses segregation in the South. You’ll be willing to bear witness to difficult things because Chronister coaxes you along with a chuckle a few minutes later. Like when she describes inattentive young people in church in “Object Lesson.” Then you alternate to challenges again: Church steeples puncture the membrane / of the stretched out winter sky in “Milwaukee Bus Ride.”

She “finds a husband in Florida” and moves back to Wisconsin to run a small farm in the 1970s. Even the title describing this change points to new perspectives that come with age: “Another of my Nine Lives.”

I’d rather plant seeds,
watch them grow in the sun,
see how far
we can make things run.

Later in “Newcomers,” she describes her family as living off the land, / harmless as trout. After children arrive, in “Is This a Mid-life Crisis?” she asks, Can we still wonder / or are we supposed to KNOW? These perspectives don’t come while you’re in the middle of hard work with the land and kids. You can’t pause and think until later. This poetry is impossible without accumulated time.

There’s a car crash and loss. The poetry of her life is clear-eyed and unafraid. Yet, somehow, this examination of the decades leaves you stunned and happy at her (and our own) resilience. Throughout, there is the sense of the natural world giving Chronister strength. Her humor joins her unflinching observation to power Decennia. In “Muse,” the second half of her double etheree lands like the book’s benediction:

… She flies back through alphabet
downpours, letters clinging to her wings,
visits lilacs, irises and
echinacea. She finds me
in the garden, breathes words
in my ear. The sun
that fed her in
Mexico
now feeds
me.

Eric Chandler is the author of Hugging This Rock: Poems of Earth & Sky, Love & War (Middle West Press, 2017). His work has appeared in Northern Wilds, Grey Sparrow Journal, The Talking Stick, Sleet Magazine, O-Dark-Thirty, Line of Advance, Collateral, The Deadly Writers Patrol, The Wrath-Bearing Tree, PANK, and Columbia Journal. He’s a three-time winner of the Col. Darron L. Wright Award for poetry. Chandler is a member of Lake Superior Writers and the Outdoor Writers Association of America. He is a husband, father and pilot who cross-country skis as fast as he can in Duluth.

New Plan: Trick the Archeologists of the Far Future

New plan is to commission pieces on bronze or stone that can survive longer than paper, longer than digital, to...