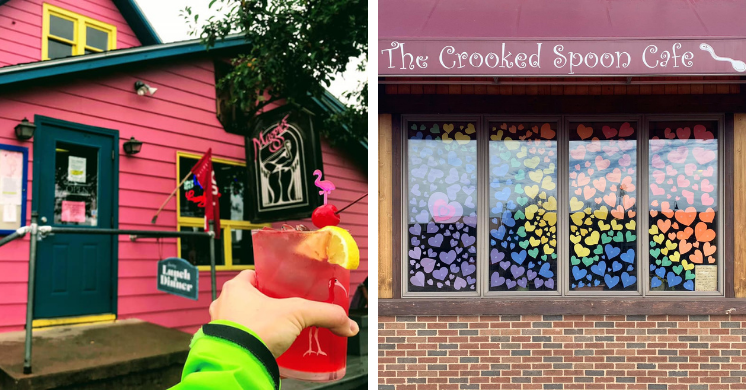 Left: Maggie’s restaurant in Bayfield marked 40 years in business in August and announced its closure in October. Right: The Crooked Spoon Cafe in Grand Marais was destroyed by fire in April. (Photos via Facebook)

The scourge of COVID-19 has challenged restaurant and bar owners at every level. The temporary closures during the pandemic are too long to list, and the industry outlook for 2021 is filled with uncertainty, but surprisingly few businesses announced they were calling it quits in 2020.

Two of the region’s most notable restaurant losses occurred in small towns away from Duluth, and COVID-19 was perhaps only loosely to blame.

Crooked Spoon Cafe in Grand Marais was destroyed by fire in April. It had been closed at the time due to Minnesota’s stay-at-home order. The owners are not planning to rebuild, but have started a food truck instead.

In Bayfield, the closure of Maggie’s was announced in October. Six weeks later, owner Mary Hulings Rice died at the age of 80. Rice had owned several restaurants in Bayfield, but Maggie’s was her first. It opened in 1980. Maggie’s general manager and chef, Chris Basina, has said she will open a new restaurant with a new name at the same location.

In Duluth and Superior, the coronavirus was in some cases the sole reason establishments couldn’t continue. For others, an assortment of factors were at play. Whether it was at the foreground or background, the hated virus was there, making things difficult for everyone. Bubble Tea Co. had only been in operation at Miller Hill Mall for about two years when the pandemic shut it down. It wasn’t long before owner Daniel Huang realized it couldn’t survive with zero business. At first, the intent had been to weather the storm. “We will temporarily close,” read the message on the Bubble Tea Co.’s Facebook post of March 16. It never did reopen after the mall’s two-month shutdown. The space is now occupied on a temporary basis by pop-up taco shop Oasis Del Norte.

Michelle Lin is the manager of West Duluth’s T-Icy Roll Ice Cream, the only one of Huang’s three Duluth businesses still in operation as 2021 looms. Lin, who is Huang’s niece, said there was one reason Bubble Tea Co. closed: “Just COVID-19.”

Lin said the mall’s closing, coupled with the desire to be as safe as possible, left Huang with only one choice: to shut down. It might not be permanent, however.

“We really want to see what’s happening in the new year,” Lin said, leaving the door open to a Bubble Tea Co. revival in a different form. “Right now, it’s still pretty bad. We’re not sure, yet.” Business had been good before the lockdown,” she said. “Lots of people liked our bubble tea.”

The uncle/niece partnership has decided to focus on the West Duluth T-Icy location during the pandemic. “That was the first store,” Lin said. “It’s the original one, and we want to keep it running. A lot of people know our location.”

Lin said the second Duluth T-Icy closed for a different reason than the pandemic. “The downtown one closed because the road construction really affected our business,” she said. “This year was pretty bad.” Interior photo of Lark of the Lake Cafe from 2016. (Photo by Lissa Maki)

Lark o’ the Lake Cafe was another establishment that closed partially because of the coronavirus’ cruel march. Located right on the corner of Greysolon Plaza in a former street-level grocery, it had operated since 2015, serving sandwiches, pizza, coffee and wine to its patrons in the name of supporting the Duluth Aviation Institute. Announcement of the closure came in May.

Sandra Ettestad, one of three owners who had managed the store, said closing the Lark “was based on two years of Superior Street construction, [which] had diminished revenues significantly, and customer access to the Lark was compromised.” In addition, “the COVID-19 pandemic would compromise the health of ourselves, employees and customers.” Ettestad added that even more construction, planned for summer 2021, and a lack of parking options also were factors.

“Our customers were loyal, fun and curious,” Ettestad said. “We enjoyed the public venue.” Pak Williams outside her Superior restaurant in 2018. (Photo by Lissa Maki)

Kamolpak Williams shuttered the second iteration of her Pak’s Green Corner this year due largely to a desire to not continue her lease in the former Kenny Wong’s location in Superior. The Thai-fusion restaurant had many fans, but Williams wasn’t interested in buying the building she was in. “After that,” she said, “the COVID came along, and it was too much work for us to keep it going.”

Williams said that her staff was fearful, and she didn’t want to burden them further when the pandemic shutdowns began to happen. “I want to be responsible,” she said.

Given that her food is so well-loved, there were efforts made to help her stay in business. “Even the mayor of Superior was like ‘Pak, we should have a meeting and figure out a new place for you.’ But I don’t have a plan,” Williams said, adding that the pressures of running a business lessened the pleasures of making good food for her customers.

The original Pak’s Green Corner operated in West Duluth from 2012 to 2014. The Superior version opened in June 2018. Jamrock Cultural Restaurant took over the Superior building in mid December. Pete Radosevich’s Eskomo Pizza Pies operated in Esko for nearly 15 years until closing this summer. The pandemic factored in, but the closing was more about Radosevich and his employees wanting to move on.

“It closed mostly because I had an employee who had a baby,” Radosevich said. “He couldn’t come in when we needed. And then, with the pandemic, we’re closing early, and he just couldn’t make a living, so he gave me a month’s notice.” Rather than start the search for a new manager, Radosevich realized he was at the end of his journey as a pizza-shop owner.

“I don’t have the time or the energy,” he said. “I’ve got a full-time job practicing law in Esko and I also own the Pine Knot News, which is a new newspaper in Cloquet. And I’m just taking over a contract to run the Cloquet cable-access channel. So, I don’t have much free time, and I was getting kind of tired of the pizza place, because, as much as I love it, it was just taking up way too much of my time. I’m 56 years old, now, and my body just doesn’t react the way it used to.”

Radosevich was going to renovate the space to use for his law practice — his office was right next to his pizzeria — but he put some feelers out for a buyer and Mike Prachar of Mike’s Western Cafe stepped up. That restaurant had operated in Lincoln Park for nearly 40 years and been brought down by the pandemic. The closing of Eskomo Pizza Pies was the opening that Prachar and his daughter Andrea King needed. “Next thing you know,” Radosevich said, “they bought me out. And they’re doing great. They’re still making pizzas with my recipes, so I couldn’t be happier.” The more than 60-year tradition of a Sammy’s Pizza location in Superior came to an end in 2020. The most recent iteration, operated by Jim Acheson Jr., closed in August after four years in business. Stop and Go Pizza took over the space at 1908 Tower Ave. in November.

The family-owned Sammy’s franchise is better known in Superior for the full restaurant and bar called the Elbo Room, which opened next to Sammy’s in 1961 on the 1400 block of Tower Ave. The operations later shared space at 1309 Tower Avenue. Sit-down service at that establishment ended in 2011, when owners Jim and Diane Giansanti opted to sell pizzas as takeout only from the back of the building. That lasted three more years. Acheson’s reboot opened in 2016 at a different location, sticking to the takeout-only philosophy.

Acheson also operated the Sammy’s Pizza and Deli in Duluth’s Lakeside neighborhood for 41 years before selling to his brother Mike in 2019. Lucky’s 13 Pub in the Miller Hill Mall closed in March, when all dine-in restaurants in Minnesota were ordered by the governor to temporarily halt operations. Though there was no formal announcement about its future, the search engine Google marks Lucky’s 13 as “permanently closed,” and Miller Hill Mall lists a new Pizza Ranch restaurant on its website as “coming soon.”

Lucky’s 13 opened in January 2017, taking over a space that had been an Old Country Buffet location for 25 years.

The Noble Pour, a cocktail lounge next to OMC Smokehouse, opened in the final weeks of 2019 and within months became a formal part of the restaurant. It lives on much the same as before, but without the Noble Pour name and with a direct passageway into OMC’s dining area.

Valentini’s Vincino Lago on London Road closed this year, but was replaced with Valentini’s Bistro in Hermantown.

Grumpy’s Tavern in Superior’s Allouez neighborhood was sold in March and new owners opened Tipsy Beaver Bar there in June.

Duluth Candy Company announced in early December it would be permanently closing by the end of the year due to the pandemic. The shop’s inventory sold out on Dec. 17. Originally called Fannie Rose Candy, the store operated at 103 E. Superior St. for 10 years.

For details on eating and drinking establishments that opened in 2020, read the companion piece to this story, “Despite pandemic challenges, Duluth area sees new crop of restaurants and bars in 2020.”

Based on the postmark and the last line of the scrawled message on the back, we might presume this image...