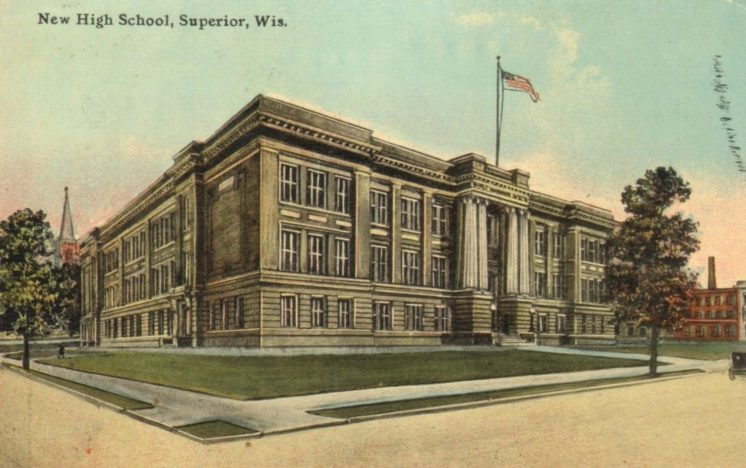 Learn more about the history of Superior Central High School and its alumni in this week’s PDD Quiz! Central A to Z: The History of a Superior School by Kathy Laakso and Teddie Meronek was an integral resource in writing this quiz; it can be found at both the Duluth and Superior Public Libraries.

The next PDD quiz will be published on Nov. 29 and will review this month’s headlines. Submit question suggestions to Alison Moffat at [email protected] by Nov. 26. #1 The cornerstone for Superior Central High School was laid in what year?

The building was razed in 2004. Read a brief history of the building on the Zenith City website. #2 A bust of this “Empire Buildier” railroad tycoon previously occupied a spot in front of Superior Central High School.

The bust is now located in a BNSF yard in Superior. #3 A 1927 student strike over the firing of Lulu “Dickie” Dickinson loosely inspired this 1979 film.

Screenwriter Joseph McBride was inspired to write the script after hearing stories of his father’s participation in the strike. Read more about McBride and his memoir here. #4 Wade Bowl takes its name from Clifford G. Wade, who served in this role at Superior Central High School.

The Superior Public Library has more on Wade’s life and death here. #5 Superior Central High School served as the summer White House for this U.S. President in 1928.

Read more about Coolidge’s time in Superior on the Zenith City website. Read more about Bong’s life on the Zenith City website. #7 This Superior Central graduate traveled the world as an award-winning photographer.

Bubley was the first woman to win a first place award from Photo Magazine in 1954; see an archive of her work here. #8 This triple-threat football player attended Superior Central High School and holds an NFL record for most points scored by a single player.

Nevers set the record in 1929, when he scored all 40 points for the Chicago Cardinals in 40-0 route of the Chicago Bears. He played for Stanford in college and later joined the Duluth Eskimos; read more about his record (and see a photo of Nevers in his Eskimos jersey) here. No newspaper photographers were on hand to cover the event due to a football game between Superior East High School and Superior Cathedral. Kennedy referenced the game in his speech, which you can view on YouTube. #10 Ray Jones attended Superior Central High School before a career in Hollywood. He earned five Academy Awards in what category?

Read more about the brief history of the Academy Awards for still photography here.

https://www.youtube.com/watch?v=-_QCiN7cVpE Duluth's symbol of 19th Century opulence and 21st Century blight is the subject of this recent aerial video by...