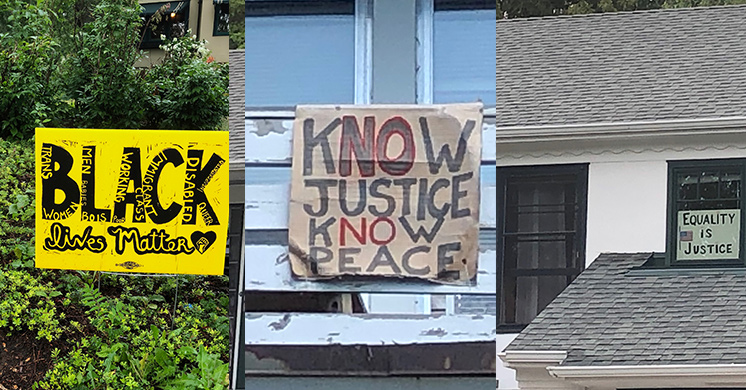 PJ CR: In Duluth, many of the signs arrived soon after George Floyd was murdered but new ones crop up from time to time. They appear on residential streets and throughfares. Most of them say, “Black Lives Matter,” but there are other words too, “No peace, no justice,” the chilling, “I Can’t Breathe,” and others. Portia Johnson has noticed. She’s a Hillside grandmother with a history of fighting for equity and diversity in Duluth. She feels the urgency. “When I see a Black Lives Matter sign I think of the ways black people have been treated for their whole lives,” she says. “They’re treated as if they don’t matter.”

She recounts a story of pulling up to her house and being surrounded by squad cars and four police guns pointed at her. Her crime? She was black. The police were looking for a robbery suspect, possibly a black man, and Portia was seen driving near the crime scene. “At that moment, my life didn’t matter to them.”

That experience wasn’t the first, or the last, but it was the most frightening. “I could have been shot. For what? I was just picking up a few groceries.” Portia says it starts early. “It starts with the young ones, the little children…” To many, they don’t matter. “So many are in poor schools, there’s a lack of decent housing, and they’re treated unfairly,” she says.

She worries about the older children. “Those black children face worse things. They are pulled out of a crowd and arrested, while the white children in the exact same group get a slap on the hand. Those lives matter. And it’s often too late, because as soon as they are arrested, they have a record and they get caught in the pipeline from school to prison.” She sees problems in the entire system, “Our kids aren’t encouraged to finished school, or to go on to get a good education. And when they get hired, they can’t buy a house because the bank has drawn a red line and they can’t get credit… and the story starts over.” Portia sees hope in the signs. “There’s a great sign near my house that says it all. ‘Love wins, Black lives matter, Immigrants and refugees are welcome, Diversity is celebrated.’ I love that one.”

The handmade signs are powerful. “This time it feels different,” Portia says.

People watched George Floyd die because he was buying groceries with a $20 bill. It doesn’t stop. “Next door to us, in Wisconsin, Jacob Blake gets shot in the back seven times… by a cop who unloaded his gun on that man. Jacob Blake matters.”

She’s upset that Jacob Blake continues to be harmed, even in the hospital. “He’s hand cuffed to the bed. It’s horrible.”

She thinks about Jacob Blake’s children and their lives. “His kids were in the car. These babies saw their father shot. They will never, never, forget what they saw. They matter… they matter, too.”

“More people are aware now. We’re calling for justice. Not just in my community, but the whole city, everywhere. We’re seeing our athletes stand up. It’s time.”