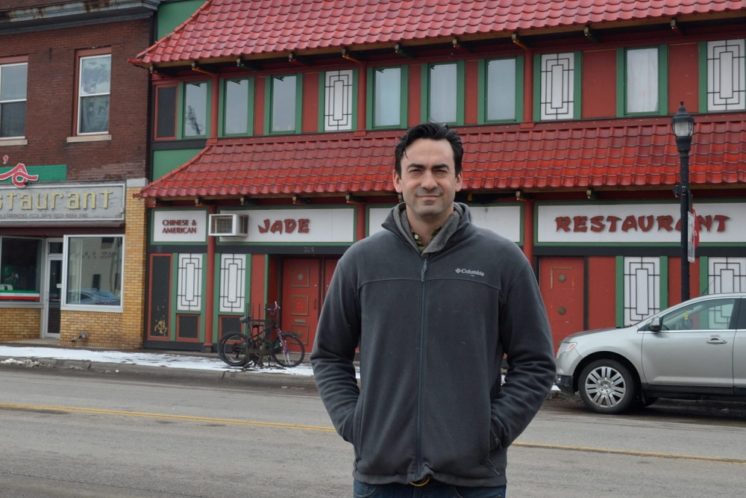 Kai Soderberg stands outside the Jade Fountain restaurant at 305 N. Central Ave. in West Duluth. Soderberg is leasing the space where he will open a tiki bar this summer. (Photo by Mark Nicklawske)

A long-running and largely unchanged Chinese restaurant — which closed for almost five years — will be reborn under new ownership as a tiki lounge when nightlife returns to normal in Duluth.

At its March 23 meeting the Duluth City Council approved a liquor license application for Kai Soderberg to operate at Jade Fountain Restaurant, 305 N. Central Ave. Soderberg and his wife, Mariah, plan to open a bar and serve specialty drinks and appetizers in a space packed with retro Chinese restaurant atmosphere.

“It’s going to be at Polynesian tiki bar type thing,” he said. “We’re going to preserve the integrity of the building, not do a lot of reconstruction, partially because I like the way it looks already – the design is really a highlight.” Jade Fountain opened in 1968 and operated as a full-service bar and restaurant for more than 40 years. It closed in 2015 and its original fixtures, extravagant artwork and kitschy decorations remained untouched by building owners.

“It’s a ’70s, old-school Chinese restaurant. It’s got red and gold wallpaper, neon lights. It’s very escapist, cool, just a great place to hang out,” said Soderberg. “It will be a little getaway.” A huge three-dimensional art piece depicts an old-world China landscape in a backroom at Jade Fountain. A similar art piece will hang in the bar room.

A large fish tank will be installed in the bar, a huge three-dimensional Chinese art piece rehung on a wall and a back patio will open in the summer. The barroom, with its red naugahyde stools, will be the first space to open in the three-room building. Operations could expand into the former dining room and an extra meeting space in the future.

Soderberg has spent 20 years working in the hospitality industry both in Portland, Ore. and Duluth. Reviving the West Duluth landmark will be his first independent project.

The new Jade Fountain won’t offer a dinner menu but plans are in the works for specialized small plates to be produced in the kitchen at Gannucci’s Italian Market next door. Gannucci’s owner Bill Kalligher purchased the Jade Fountain building in 2015 and operated the restaurant for a short time before closing it. Soderberg is leasing the space from Kalligher.

The building at 305 N. Central was built in 1897 and was home to the Tourist Cafe and Hotel. Jade Fountain was established by George Wong in 1968. He sold the business to Sick Cheung Lee in 1997. Lee died in 2014 and his widow sold the restaurant to Kalligher.

Kalligher said Soderberg approached him with a plan to revive the exotic space and add something new to the neighborhood.

“I’m excited for West Duluth,” said Kalligher. “I think a lot of people are looking forward to it.”

Jade Fountain is just a couple doors away from the newly renovated West Theater and across the street from Wussow’s Concert Cafe and Zenith Bookstore. An Asian-themed cocktail lounge will be unique to an area that features multiple, long-established neighborhood beer bars.

Kalligher and Soderberg are still working on ideas but the small-plate menu will likely feature Asian-style chicken wings, crab Rangoon and egg rolls. “Maybe some wonton soup,” Kalligher said. “It will be good.”

Soderberg said the food will fit the space and follow new drinking and dining trends.

“I think more and more bars — like Bent Paddle the brewery — just cut out that overhead of food and just have it available close by,” said Soderberg. “What (Kalligher) wants to do is match what I’m doing with my drinks, so I think it will be a really good match.”

Soderberg, a Duluth native, moved to Portland for college and worked in the bar and restaurant business for 15 years. He moved back to Duluth and served as food and beverage manager at Radisson Hotel Harborview before taking a general manager position at the Rathskeller, part of the Just Take Action bar and restaurant organization. A wall sculpture hangs in the dining room under red lights at the Jade Fountain. The restaurant was established in 1968 and still contains its original art work.

“It’s very, very exciting. I’m thrilled,” said Soderberg. “The timing could be a little better. I got the place and secured everything a couple days before the coronavirus hit but I’m still optimistic.”

Soderberg said he plans to offer high-quality, reasonably priced drinks in a relaxed, retro-styled room. He doesn’t plan any major changes to the building but will spend the coronavirus shutdown cleaning and making small improvements. A grand opening will be delayed until after the national health emergency subsides.

“I just want to put some joy back into the world, back into the city,” he said. “I think a lot of people will be trying to do that so I’m not on my own, but that’s the way I’m going to try and do it.”

Who (or what) was Sonny?

This 1910 Duluth postcard raises at least one large looming question.