Thank you, distinguished citizens, for conferring upon me this office of Snow-Fort City Mayor. It is no small honor to assume my half-imaginary duties in this pop-up, collaborative, city-planning art fantasy at the edge of Lake Superior. “City” is an aspirational term for this arrangement of snow walls and monuments in Duluth’s Leif Erickson Park. Snow-Fort City’s true location lies somewhere within our skulls — like all cities. My Facebook post initiating construction was shared more than a hundred times in just a few hours, and it attracted the Duluth News-Tribune and KBJR-6/CBS-3, which tells me the vision of the snow-fort city is the real object. Almost none of the post-sharers, newspaper readers, or TV viewers made it down to the actual Snow-Fort City. They are content to view it with their eyes closed, in its most pure form: the Platonic one.

It literally came to me in a vision, like the origin of so many great cities. In a way, like Duluth itself. I remember the words of George Nettleton’s wife from 1856, when her husband’s mind swam with dreams of Duluth-as-future-city: “I thought he had a pretty long head to see that there was going to be a city here sometime when there was then nothing” (Duluth: An Illustrated History of the Zenith City by Glenn N. Sandvik).

Nettleton’s was a vision of the future, just as mine was — I saw Leif Erickson Park as a bustling snow-city of play and leisure — I saw snow hotels, fields of snow sculptures, a snowball Olympics, and great snowball fights spilling into the streets and sweeping through the Hillside.

While we negotiated this a-borning culture, Leif Erikson Park would offer us the perfect perch to scan for conditions prefiguring skateable ice (what you might call sea-smoke-signals). In part, Snow-Fort City was conceived to summon the People’s Free Skate Rink II. The People’s Free Skate is the Snow-Fort City’s ideological progenitor. If the lake freezes like last year, these two local, semi-permanent, imaginal settlements will join at the hip.

Now that I have assumed the mayoralty, I pledge to forge full-steam ahead into the imagination. We have our literal beach-head, now let us storm into the mind’s eye. Together we will pull our half-pretend city all the way into dream.

The Free Skate has already done it, in an act of magic I could not have anticipated. One of my fellow Free Skate founders, Robot Rickshaw (aka Troy Rogers) told me the following anecdote this summer. We were tripping the light fantastic in Leif Erikson Park as a matter of fact; the park has become our launch pad. We were seated on the soft green grass of the amphitheater and the sky was full of eyes. This was right after the People’s Free Rock-Skipping Contest that we had hosted and judged on that marvelous rock beach there.

It had been a day of mysterious freedoms. And those eyes covering the sky, projecting from me, bore witness as I told Troy (his name shared with a city that was destroyed many times) my vision of Snow-Fort City. He midwifed the idea; the eyes witnessed that too.

Troy told me he had lately happened upon a woman sitting on that rock beach in the sun, staring out to sea. And she told him she was trying to visualize the Free Skate, out there on the gentle waves now filled with light. Half a year earlier, those waves had been dark, under 18 inches of solid ice from here to Ontario. The Free Skate had been a quarter-mile out on the ice, which was now a null-space occupied only by summer air and open water. Yet we had all stood upon it. Where was it now? In a sense it was still there, untethered from time.

As Troy spoke, I recognized that unnamed woman’s feeling: that of the Free Skate’s concreteness, its presence even in absence. We stared across the water at a place that no longer exists. It is “lost as one day all things will be lost” (Borges). But one feels an act of will should return us to it. 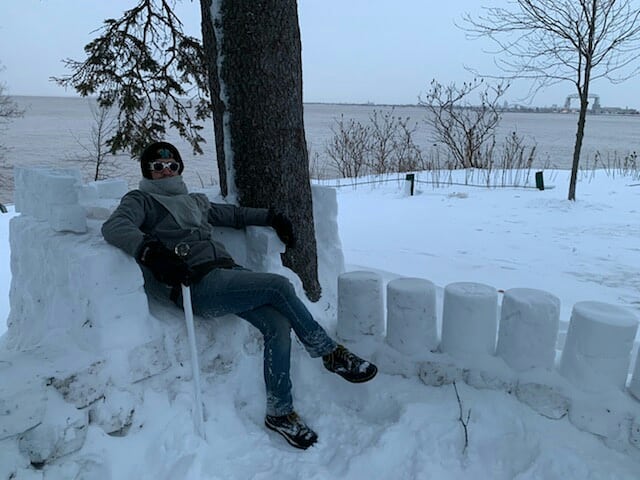 The State of the Snow-Fort City

“The self-reliant city views itself as a nation.” – The New City-States by David Morris

Citizens and artists went to Leif Erickson Park every day for a week, alone or in teams, to do this work-which-is-also-play. With temps hovering just below freezing, the powdery snow hardly cooperated. Cleverly, we had water to add. And we did what we could. Five snow-forts and one ceremonial henge were begun. Two statues and a snowman cemetery were completed, along with various obelisks and snow-garden structures. At least five sled-roads grew from the play of children and overgrown children alike.

But since the temperature plunged even further after Day 7, plastering the site with additional dumps of frozen, aeolian snow, progress has halted except for sporadic tinkering. Snow-Fort City must be considered, like all cities, to be a great unfinished work. It is a city built almost entirely out of potential and ideas. Its founders have stepped back into the fabric of reality for a while, leaving Snow-Fort City behind as an anchor to the invisible.

The walls of the empty structures are open to any visitor. It is not unlike the city of Duluth itself during the great contraction of the early 1860s: “At this time, Duluth was almost entirely deserted … I had the freedom of the city and all the empty houses in it; I needed no key or burglar tools to enter them” (Sandvik). But if there is another People’s Free Skate, then we may well recall the words of state rep James J. Egan from 1869, celebrating the largesse of Jay Cooke: “The lifeless corpse of Duluth … sprang full-armed from the tomb … henceforth the sun of prosperity gilded the lake, and your bluffs echoed and re-echoed back the glad acclaim: ‘Minnesota has triumphed!’” (Sandvik)

Interest in Snow-Fort City remains high. As Mayor, I encourage all weather-hardy citizens to freely add to what we’ve already done. We have a good foundation for even a gradual expansion through the winter months: walls can be made higher, longer, stronger, more decorated. Or, if the ambition strikes, to start new (or excavate old) sled-trails, snow-forts, and monoliths. Water will make the powdery snow buildable; if only there were a large source of water nearby, hmmm…

Time moves differently in Snow-Fort City: faster. If snow equals stone, then one day equals hundreds of years, perhaps thousands. Sculptor Sean MacManus saw that center stage would be a perfect place to begin his idea of a ceremonial henge; sadly, he had just built the base of it when it was sacked by happy vandal children one morning. Although still in disrepair, most of it has been stood back up to recall its yesterdays, and its possible future. The same with artist Annmarie Geniusz’ monolithic snow-statue of Poseidon, which I found reduced to a pile of its constituent blocks just one day after its creation. It called to mind the world’s history of smashed and desecrated statuary. I was able to partially re-assemble it — twice! — its ruined skull now a frightful death mask. I was reminded by Duluth drone videographer Riley Goss that many great cities have been destroyed.

The earliest snow-fort of Snow-Fort City has taken on an outsized significance. A large and sturdy henge, it had been built even before the official Day 1 of our history. And its builders never returned to that site which they had constructed, on the high hill overlooking all. After 48 hours, we were already directing repairs at it, but gradually left it alone to focus on our own modern efforts. This original henge — Snowhenge — fell into a magnificent ruin. Echoes of great ages peal from it, and we wonder: who were these mysterious people who abandoned this work? What were their hopes and dreams?

The whole week of initial activity evinced a similar time-distortion, as we approached the edge of resource depletion. Were we following the destructive patterns of the ancient city-states? Even with a two-foot layer of snow blanketing the region, one could only make so many snow-bricks. Snow must be compacted and neatly stacked — to the architect, there’s less of it than there looks like. I noticed while building on the park stage that I was rather quickly running out of snow. Soon one clears the immediate area, and must range farther and farther afield. I had wanted to build something like a snow-Death Star on that stage, an unbreachable castle. But that castle will have to remain in the imagination a while longer. I scaled back these early efforts to make more, smaller structures. Instead of a Death Star, rook-like battlements formed at each end of the stage, connected by a low wall. One of those battlements incorporated a large window of crazed lake ice, an idea suggested by a free Snow-Fort City citizen. We harvested ice from the tidepools of the shore just down the hill, and also icicles from the trees. And even in these activities, our appetites outstripped the lake’s capacity to form more. But winter continues apace…

The Whiteness of the Whale

After an eon of ignoring my real city, I left Snow-Fort City at Leif Erikson. I traveled up the Hillside, to finally try and dig out from the six-foot-high, block-long mountain range of icy snow heaped on my sidewalk. It was a great wall that resisted all but my steel shovel normally used for the garden. I scaled the peaks and cut down through them, heaving my shovel like a harpoon into the white mass. I imagined myself an Ahab, and the snow-mountain was the white whale: “With body arched back, and both arms lengthwise high-lifted to the poise, he darted his fierce iron, and his far fiercer curse into the hated whale” (Moby Dick by Herman Melville).

It occurred to me that Snow-Fort City harnessed snow for good, but like all elements – even the elements of our psychologies – sometimes we must fight them. All Duluthians know this, as do all builders of Snow-Fort City.

Italo Calvino writes in his masterpiece, the book Invisible Cities, “With cities, it is as with dreams: everything imaginable can be dreamed, but even the most unexpected dream is a rebus that conceals a desire or, its reverse, a fear. Cities, like dreams, are made of desires and fears…”

Melville’s chapter “The Whiteness of the Whale” explains how a stretch of snow seems wonderful, but terrible also: “Is it that by its indefiniteness it shadows forth the heartless voids and immensities of the universe, and thus stabs us from behind with the thought of annihilation, when beholding the white depths of the Milky Way? Or is it, that as an essence whiteness is not so much a color as the visible absence of color, and at the same time the concrete of all colors; is it for these reasons that there is such a dumb blankness, full of meaning, in a wide landscape of snows?”

-All my essays here.

Another new business has opened in a revitalized Duluth building positioned to add more retail shopping to the Lincoln Park...