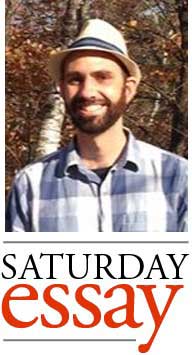 In 2016 the city of Duluth purchased a remote-controlled glider designed to humanely chase away geese. “The Goosinator” was acquired from an eponymous company in Denver, Colo. at a cost of about $3,000 plus shipping and handling. The city made this purchase with the express goal of ridding Bayfront Festival Park of an increasing abundance of goose feces, a consequence of the recovering Canada goose population. In large amounts, goose feces diminish the park’s appeal and utility, and can cause illness in people and pollute the lake.

Two years on, the Goosinator agreed to meet with me for an exclusive, first-ever interview.

No one in the newly-opened Dovetail Cafe & Marketplace recognizes the Duluth park maintenance worker hustling in from the cold for an interview, but he draws notice all the same. The Goosinator stands about 20 inches tall and, at almost four feet long, has to sit sideways as I help him into a chair at a table made of reclaimed birdseye maple. He wears an outsize, toothy permagrin. He’s bright orange. And he seems perfectly at ease with the sideways glances, thanking me with a wry smirk as I pass him the Cascara Tea I took the liberty of ordering him. After all, he’s used to being the focus of attention, as it’s a prerequisite for his unusual line of work. PDD: Thank you so much for agreeing to talk with me today.

TG: Hey, yeah, no problem. I’m a seasonal employee, so once mid-October rolls around, I pack up and spend the winter in storage in a park maintenance facility in Canal Park. Honestly, it’s just nice to be out, and to be in a different part of town. Has this place always been here?

PDD: Well, again, thanks for doing this. Let’s talk about why you’re in Duluth. Where are you from, and what brought you out here?

TG: Right. So, I was born in Denver a couple years ago, and got hired right away to clean up the mess down at Bayfront.

TG: All the goose shit. Feel free to edit that. When I came to Duluth, Bayfront Festival Park was one big Slip ‘n Slide, just covered in a blanket of anserine feces. That’s the goose adjective, anserine. It’d been getting worse and worse for years. Trampled by Turtles played a show in the summer of 2015 where 11 people died, is what I heard; I guess it nearly broke the band. After that, the city tried all these things to keep the geese out, but nothing worked.

PDD: What did they try?

TG: They tried decoys. The first ones were these black coyote silhouettes. The geese didn’t know what to make of them at first, but they wised up quick, and in a couple days the things might as as well have been part of the gaggle, just mixed in among everybody else.

Next they tried “solid” decoys, shaped like predators. Some were coyotes again, some were swans. The same thing happened with them, the geese saw through them right away, and some of them got stolen. Maybe someone stuffed them with firecrackers? I dunno. Some people’s kids, right?

So, after that, the city tried monofilament string, real thin, six or eight inches above the ground. That was probably the worst. Nobody could see the stuff, so people just walked through it and destroyed it. Then they brought me in. PDD: What do you do that’s different?

TG: I keep the geese out, is what. I work with an operator, a guy named Paul, or this other guy John, good guys, and they guide me remotely to round the geese up and drive them away.

PDD: You chase them?

TG: (Laughs) Not quite. And you told me about the title you’re thinking about, and it’s cute and all, but what I do is different. I tried chasing them first, though. My first time out, spring of 2016, I just charged this gaggle, headlong into the middle of the park right in front of the stage, and they just parted to either side like I was Moses and I rolled right past them. Geese are smart, man. You ever really watch a gaggle while they’re grazing? They’ve got it together. All the adults trade out, some with their heads up, working as lookouts, some grazing. They just keep switching off, so they’ve always got fresh eyes looking out for danger. And if some bozo looks like they’re gonna just run through the middle, the lookouts just move to either side and the rest of the geese follow, splitting the gaggle until the intruder’s on the other side. T.H. White talks about geese in The Once and Future King, and Merlin shows young Arthur all these animal societies, and geese are Merlin’s ideal society, because of their mix of independence and collectivism.

Anyhow, what I do is more like herding. First, I get up early, before the geese, like four o’clock in the morning. If they’ve settled in by the time I show up, they’ll stand their ground and fight with me and they’ll win. So, I get there early, and when they start coming in, I circle around them, tightening up the gaggle. Once I’ve got them close together like that, I start driving them by cutting close on one side of the circle and leaving more room on the other. I do that until they’re in the slip, that channel of water by Peir B Resort, where most of them are coming from in the first place.

TG: Not yet. If I left them in the slip, they’d just come right back on land as soon as I took off. See, my foam skis are capped on the bottom with polycarbonate skin, so I can move over grass, water, ice and snow. I’m amphibious. So, I drive them out of the slip, and then they stay gone.

PDD: Ever have any problems with that?

TG: You heard about that, huh? Yeah, one time I did, this June. I got a little carried away, and my operator couldn’t guide me back. The Coast Guard scooped me up and brought me back no problem. We all gotta accept help sometime, you know?

The Goosinator driving geese in water. Courtesy of Pioneer Press.

PDD: Right, no, I’m just busting your chops. Better you than me. Actually, I’m surprised there aren’t more of you here. Is there anybody else in town doing what you do?

TG: There really isn’t. Some hotels have talked about using drones, but between you and me, I don’t think it’d work. You see, the geese we have up here, Canada geese we’ve been talking about, by the way. The Canada geese up here, they don’t have any natural predators that hunt them from the sky. So I’m not sure these geese would recognize drones as a threat. Now, there are some big hawks in Missouri that prey on Canada Geese, but these geese don’t go there, so my hunch is that they wouldn’t be nearly as responsive to being dive-bombed by drones. Plus, I’m super durable, and I do well in water. And yeah, maybe I’m biased, I guess, but I think if they go Goosinator, they’ll be very satisfied.

PDD: What do you like most about your job?

TG: I like keeping the park sanitary, I like how active the work is. It’s also my only social outlet, so it’s a nice chance to meet people, to meet women. That’s tough though, too. I mean, most of the women I meet are geese, but, judging from the reactions I get, women seem to be funny about Goosinators, you know?

PDD: Maybe it’s because they’re geese and you’re chasing them.

PDD: OK, one more. Do you have a favorite local band?

TG: Definitely Low. Plus, I mean, no one ever died dancing at a Low show, am I right?

Fact check: The Goosinator is correct: no one has ever died dancing at a Low show.

https://www.instagram.com/p/BqNErIFHUTb/ This week, some cold and icy scenes from around the area.