This week, photographer Richard C. Johnson tells how he looks for and catalogs special locations to come back to with his camera, how and why he has switched between ways of making images, and the advantages of Flickr over Instagram.

RCJ: I have lived and worked as an artist in Duluth for more than 35 years. My education and training as an artist was in both printmaking and photography. I have always thought of myself as first and foremost a photographer, even through those times I was not actively photographing. In the latter half of the 1980s, I found myself without access to a viable darkroom, and was living in a house that had no suitable place to build one. I spent a few years working with collage, mixed media, and assemblages, with varying degrees of success. In 1992 I purchased a Mac computer along with a flatbed scanner. For the next 8 years I worked exclusively within the realm of digital montage. When I did photograph, it was to make images to be part of a montage, not as singular works in themselves. By the turn of the century, 2000-’01, I felt a bit burned out with this work, spending too much time in front of a computer, and living too much in my head. I felt that what I needed was to return to photography, and reconnect with the world. After what was approximately a 14-year hiatus from straight photographic pursuits, it was not an easy transition for me to climb back in the saddle. I made a great number of fits and starts, with scattered approaches, both technically and conceptually. Frustration in the process lead me to another tangent of working with digital film making. This lasted 3 years, but it held the same pitfalls of the montage work, too much computer time. So, back to photography I returned, and by August 2009, I finally felt confident in what I was doing with photography, and embarked on what turned out to be a four-plus year endeavor. 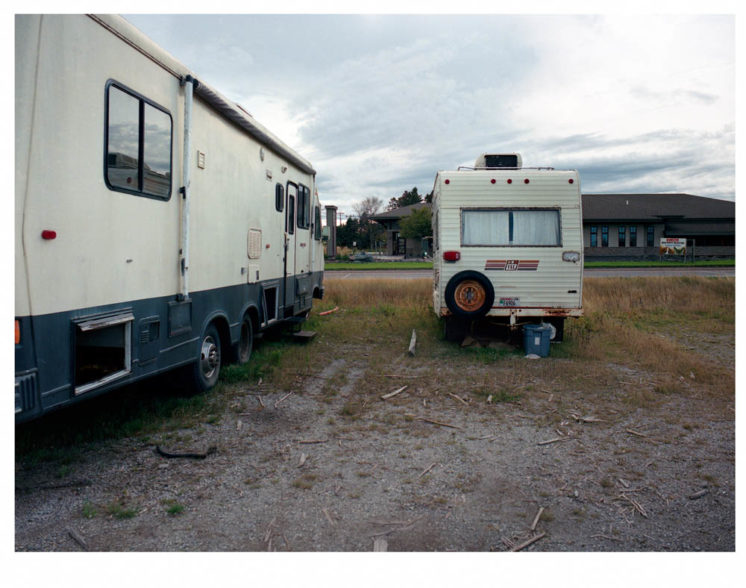 In the Autumn of 2013, I completed my project, traveling and photographing in the 7 most northeastern counties in Minnesota, and northwestern Wisconsin. In this work, I was looking at what exists here for the residents, rather than the face presented for tourists. In working to produce a visual survey of the physicality and spirit of this place, I focused on the products of man against the backdrop of a faltering economy. I photographed secondhand shops, failed businesses, neighborhood restaurants and bars. The culmination of this was that a selection of 71 of my black and white photographs from these travels, were used to create the photo monograph, The Other Side of Wilderness, published by Will o’ the Wisp Books in March 2014. 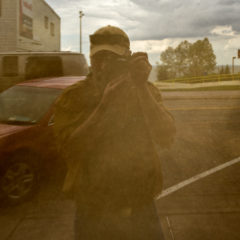 During the time that I was traveling and photographing the images that were eventually to become my book, I began noticing what I considered to be the fraying of the edges of the American empire. Places public and private were looking a bit thread bare and shop worn. It appeared to me that the much-celebrated American Century might being wrapping up. I encountered the marks of decline and of economic downturns most clearly upon the land. The land remains a possession, but perhaps no longer a valued or cherished one. Bankrupt industrial sites return to ragweed and thistle. Property with no commercial monetary value is left to its own devices. Unsaleable building lots are overgrown with self-seeded poplar and weedy ground cover. Objects no longer of use were discarded willy nilly in the landscape. These observations set me on the path to the work that I am currently pursuing. I have moved from black and white to color, and am now doing approximately half of my photography with film. The two working titles that I have for this project are The Land Unloved, and The Landscape of Decline. This may or may not end in another book, only time will tell. When photographing, it is the image making that is the focus for me, if you’ll pardon the pun, not something that is tangental to other activities. I have two primary approaches to photography. First, whenever I am going about the business of living, I am constantly scouting potential sites, locales, and specific subjects, looking for photographic potential. I keep a notebook to record not only the place or subject, but also the time of day, the weather, and type of light, so that when I return to photograph a scene, I aim to have similar conditions at play as were present when the place or thing caught my eye. My second approach is what I refer to as the photo safari. I pick a location, be it a neighborhood or stretch of road or a town. I then pack up my camera gear and head off on the road trip to see what I might find. Both methods work for me. While photography has been adopted for supportive uses broadly within the visual arts, I feel it remains a viable stand alone discipline as an art practice unto itself. As an artist and a photographer, I set myself on a journey of visual appropriation. A journey which begins always in a type of darkness, and ends in some fashion of illumination. I glean what I can, through what I hope are intelligent choices and clear vision. I strive to make work that is imbued with verisimilitude, but is more than the simple transcription of surface reality. No photograph can tell a complete story, it is by its nature a type of fiction. I create small fictions, which I hope suggest a larger truth, and try never to present the patently false.

My need, or perhaps my compulsion for image making has been with me most of my life. Aristotle said, that what separates the artist from the run of the mill mad, is that the artist, occasionally through their work, is able to escape their sickly perspective. This might be true, at any rate it works for me. Another great thinker, Robert Frost said that “Every poem is a momentary stay against the confusion of the world.” This also works for me, as I am sure it does for many others working in what is generally referred to as creative endeavors. There is a time in the making of an object, or image, or a poem or movie or a dance, when there is an expression of something of the ineffable. A time when the storm abates, the world becalms, and you have the sense that you really have your hands on something real and secure. It passes of course, but it is one of the experiences that keeps the process going. Escaping your sickly perspective, or momentarily keeping the confusion at bay, both are more than reward enough. A number of my works are in the permanent collections of the Kunsthall i Växjö, Växjö, Sweden, as well as Kronoberg County, Sweden, however they are not readily accessible from this continent. Mesabi Range College in Virginia also owns a few of my works, but their placement there is not known to me. The Tweed Museum at U.M.D. also had a few of my works in its collection, but they may have been divested ala the dumpster some time ago, I’m not really sure. The best way to see my work is through my book, The Other Side of Wilderness. It is a collection of 71 of my black and white photographs, which have been beautifully reproduced as duotones. A number of regional public libraries have a copy, and a few are available at Lizard’s Gallery in Duluth. The book can also be obtained directly from the author, if interested please send inquiries to me at richardcjohnson @ charter.net. K-Mart, out of business, Superior, WI

Within the arts, I have a fairly respectable curriculum vitae, and a pretty decent exhibition record, but with the exceptions of a few group shows in the Twin Cities, I haven’t shown much of my work from the last few years. My friend, the very gifted painter Scott Murphy and I have been talking about doing something together. Whether this will turn out to be a two-person show, or some sort of collaboration is not yet clear. We are still in the spit balling phase of deciding what exactly it will be. 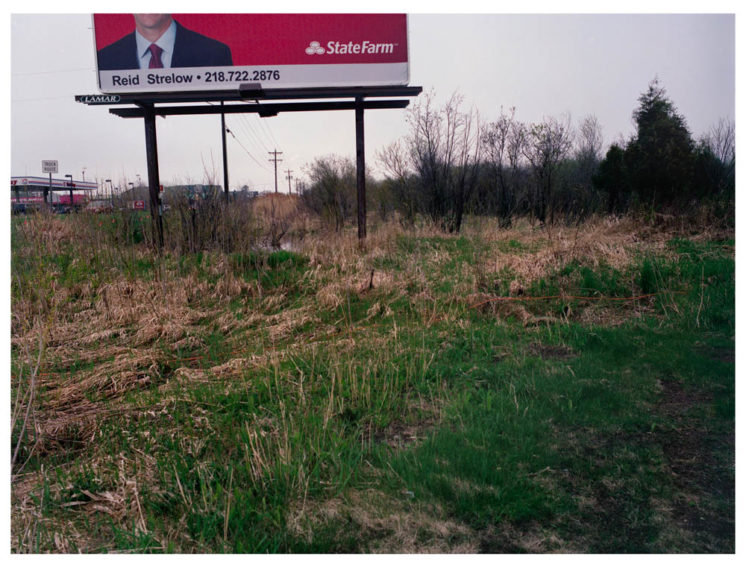 I have had a very small, and very low-energy presence on Instagram. I don’t really ‘get’ it completely, and because of this, have little interest in it. It’s something about ‘branding?’ maybe, that and collecting thousands of followers, or it is at least as far as I can tell. I have had much more to do with the Flickr site, and this has served me in two ways. First, it is a running archive of my work over the past number of years. I can easily look back to review ideas and directions that I thought to be blind alleys, and find that I’m able to breathe new life into some of them. Also, I am able to see a progression of a direction or approach as it developed, or didn’t develop over time. Secondly, it has allowed to find the work of, and connect with, a number of photographers from around the world, and all in all has been a very positive experience that I otherwise would not have had.

My Flickr photo stream can be found at flickr.com/photos/[email protected].

https://www.youtube.com/watch?v=HyK6XaZRLfw An ode to procrastination by Duluth's Ingeborg von Agassiz.