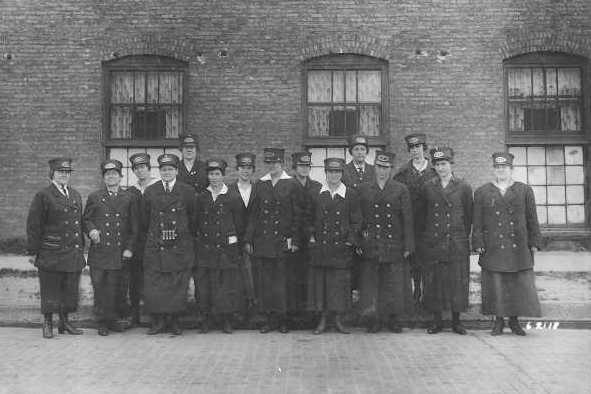 One-hundred years ago today, Duluth was still reeling from the devastating fires of the previous week. The Duluth Herald ran a small article celebrating the efforts during the fire of a relatively new worker in Duluth: a female conductor on the Street Railway.

Earlier in the summer of 1918, 21 women “conductresses” were hired to help fill the gaps in streetcar staffing left by men going off to war or leaving to work in the shipyards to support the war effort. They wore the same uniform as the men, with the addition of a skirt, and at least a couple of the women continued working for nearly 10 years in that role.

The  unnamed woman conductor from the Oct. 19, 1918 article said this about helping to evacuate residents on the Woodland streetcar line:

I just could not collect the fares from these people. I think there were but few that had any to pay. Most of them looked entirely destitute. I had an old coat with me that I had been using over my uniform and gave that to someone and I hope it did the person some good. I was about $6 short in my cash when I turned in that night. I could not help but hand some of those poor women a little change, they looked so forlorn. The sum did not amount to anything to me. I am working and earning a good salary and did not need the money nearly as bad as they did.

Article from Duluth Herald, May 11, 1918. Photo of Conductresses is held by the Minnesota Streetcar Museum and  is found here.

This week in Selective Focus, we're going to tune in to Kip Praslowicz's YouTube channel. You may remember Kip from...