This graphic from Meyer Group Architecture shows the vision for restoring the West Theater. Image via Robert Boone.

Movies could be returning to West Duluth for the first time in 40 years. Restoration of the former West Theater at 319 Central Ave. is poised to commence according to building owner Robert Boone.

Boone, publisher and editor of the weekly newspaper Duluth Reader, purchased the vacant former theater in 2016. He said he plans to create a replica of the original Art Deco theater as it was built in 1937. Boone said the theater will retain its original name and have one screen for films and a small stage for concerts and other events.

Boone’s original intent was to have the theater up and running by the end of 2017, but lining up financing took up most of the year. This past winter a construction barrier went up around the front of the building, but Boone said little work has happened so far. He said he plans to open the theater some time this summer.

“Blueprints have been submitted to the city,” he said, “and have not been approved yet.” 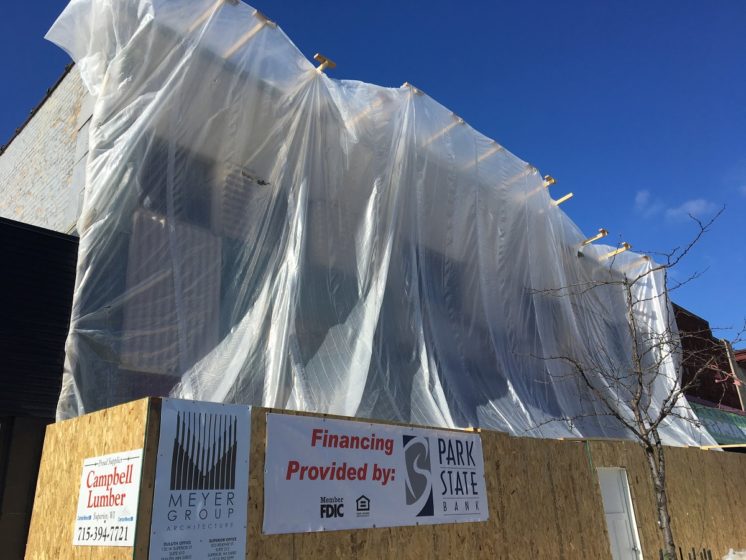 Construction barriers and a large sheet of plastic have covered the West Theater building in recent months as the new owner prepares to renovate the building. Photo by Vinny Harvieux.

The project was approved for a $50,000 loan from the Duluth Economic Development Authority and another $50,000 loan from the nonprofit Duluth 1200 Fund. Members of the 1200 Fund board of directors are appointed by Duluth Mayor Emily Larson and the fund is staffed by the city’s Director of Business and Economic Development, Heather Rand. Rand said Boone has multiple sources of funding for the project.

“There’s other financiers and also his bank and he’s got equity,” she said, “As he completes the work then he can tap into those funding sources.”

Along with the loans Boone said the rest of the funding would be from himself. He estimated it would cost around $500,000 to complete the project and open the theater, but acknowledged that figure might be a bit low.

“We don’t know for sure, but we expect it to be under a million,” he said. The West Theater as it looked in October 1982. From 1959 to 1978 it operated under the name Duluth Theater. Photo by Roger Nesje from the West Duluth Memories Facebook group.

In addition to mainstream movies and classic films, Boone said the restored West Theater will feature an occasional concert.

“With mainstream movies (the studios) expect their movies to be shown on Friday and Saturday,” he said. “If there’s a time with no major movie showing, we might have some concerts.”

Boone said it’s too early to tell what type of music acts would perform, whether local or national. He also noted he has no estimate of the production cost of such events.

“I’m more worried about the heating costs,” he said.

Jason Wussow, owner of the Beaner’s Central Coffeehouse across the avenue, thinks the theater will be a nice addition to West Duluth.

“I think it sounds great, it sounds pretty fantastic,” he said. “I think it will be cool for our little neighborhood. I’m excited to see how it turns out.”

It’s really Duluth out there

https://www.youtube.com/watch?v=8qH5D6C3r3k This clip features a Duluth reference from the 11th season of Mystery Science Theater 3000, released in 2017. It's...