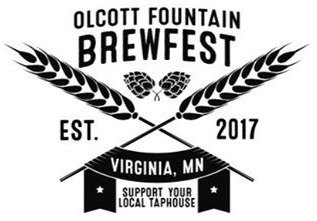 The Iron Range’s first craft beer festival is on tap this Saturday in Virginia. In addition to a craft beer village, the Olcott Fountain Brew Fest will feature food, live music and kids’ activities.

The event is a fundraiser organized by the Olcott Park Fountain Restoration Committee, whose mission is to restore the park’s historic fountain to its former glory.

“It’s the first brew fest north of Duluth. We seem to have a lot of interest from all over the Iron Range, which is awesome,” says Carly Gobats, who curated the event’s brewery and music lineup and serves as the its volunteer coordinator.

Olcott Park’s iconic fountain fell into disrepair and hasn’t been operational since 2013. The 80-year-old fountain was originally created as a Works Progress Administration project during the New Deal era.

The fountain’s  innovative, automatic electrical system with alternating spray patterns and vibrant multicolored lights was such a wonder when unveiled on Aug. 16, 1937, that police were reportedly called in to control the crowd of awestruck spectators.

The Fountain Restoration Committee’s ultimate goal is to raise $900,000 in private donations and grant funds to repair and fully restore the fountain and get it listed on the National Register of Historic Places. The festival has already presold 200 tickets, mainly to Iron Range residents but Gobats expects a range of attendees from Duluth and the Twin Cities as well. She says the idea of holding a beer festival was to attract a younger crowd to the fundraising cause and raise awareness about the fountain’s need for restoration. The committee hopes to make it an annual event.

Gobats manages the 218 Taphouse in Virginia, which primarily features Minnesota craft brews. She’s been working to “build awareness about the huge craft-beer movement in Minnesota” on the Iron Range.

The festival will take place in Olcott Park at 801 Ninth St. N. For $20 in advance or $25 at the door, participants get a 5-oz. commemorative tasting glass and unlimited samples. Fourteen breweries and two cideries will be represented at the event.

Each beverage company will be pouring 4-5 different styles. Loon Juice from Spring Valley will have all five of its hard ciders on offer. Canal Park Brewing, which doesn’t distribute its beer outside Duluth, will be sampling several brews, including a seasonal Passionfruit IPA.

The event is promoted as family-friendly. Local community groups will offer activities for kids, such as a scavenger hunt, beanbag toss and a sawdust pile.

The beer tasting portion of the event happens from 4 to 8 p.m. A variety of Iron Range and Duluth bands from different genres will perform during the tasting. Pizza, tacos, burgers, hot dogs and brats will be available for purchase from the Shop Coffeehouse, B Street Tacos and North Gate Catering.

Headlining musician Tim Mahoney, the Minneapolis rocker formerly of the Blue Meanies and more recently popularized by The Voice, takes the stage at 8 p.m. At that point, the event opens up to the public and beer will be sold by the glass. Evening beer sales will benefit Olcott Park’s Friends of the Greenhouse.

Time to pat yourself on the back, Duluth

Duluthians, while not ones to brag, might quietly pat themselves on the back and take a minute to celebrate the...