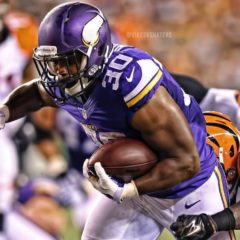 Minnesota Vikings running back C.J. Ham has been lining up at fullback during the team’s 2017 rookie mini-camp. The Duluth native broke into the NFL last season as a tailback.

Ham was on the Vikings practice squad in 2016 and was briefly on the active roster but did not play in a regular season game, making him eligible to participate in this season’s rookie camp. Vikings Team Reporter Eric Smith wrote on Vikings.com today that during team drills Ham “lined up as a fullback in front of Vikings rookie Dalvin Cook.”

“I’m kind of playing a new position now,” Ham told Smith. “(I want to show the coaches) that I can learn it and be accountable. … It’s still fairly new to me, but I have to be an athlete and just roll with the punches a little bit. If you make mistakes, learn from them and try to do it better the next time.”

Ham joined the Vikings during the 2016 rookie camp on a tryout basis, led the team in rushing during the preseason, and signed to the practice squad after final roster cuts. He scored a touchdown against the Cincinnati Bengals in the preseason opener.


And in other Ham news, this happened …

Baby girls first couple steps, she is getting so big! pic.twitter.com/ZMDoBdy00p

North Country from Above

https://vimeo.com/215744125 Brooklyn, N.Y.-based filmmaker and cinematographer Andrew Cagle recently shot this aerial footage in the Duluth area and along the...