Sarah Brokke certainly stays busy making and teaching art, but the past few weeks seem to have been especially busy. She is featured in the documentary “Portrait of an Artist,” which debuted at Zinema 2 last weekend (available online soon) and hosted an opening at the Zeitgeist Arts Cafe on Feb. 27. She has also been collaborating on a mural with Harbor City International School students that will be unveiled in April at the College of St. Scholastica, and she is the cover artist for the upcoming Homegrown Music Festival Field Guide.

S.B.: I am a painter who works primarily in oil, and my style and means of working have been a progression over the past 17 years. I’m a process-oriented artist who responds primarily to my personal experiences through my work, in an attempt to understand the complexities and contradictory nature of life. While entrenched in personal dissection, I hope for my work to also address contemporary socio-political constructs. I often explore this through the utilization of the figure, symbols, and references to art history.

She Wears Poppies in Her Hair Oil
Acrylic, and Graphite on Canvas 2016. On View at the Tweed Museum of Art.

My work originates with a question, which leads to the imagery. As I physically interact with that imagery through paint, it often evolves into something that only loosely resembles the starting point, and results in not so much an answer to that starting inquiry, but a clarification — and perhaps further questions.

I’ve been doing this for 17 years, formally. Although I have painted since I was quite young, having taken my first art class outside of school when I was nine.

I think the main challenge I face is the use of the figure within my work. There are a few reasons that use can be problematic. Two, in particular, are at the forefront of my consideration:

First, the figure has been used as a vehicle of creation for as long as the paint has been used for expression by humankind. Because of this, I feel I my decision to utilize the figure must be deliberate and contemporary.

Secondly, a power dynamic exists when one uses the form of another human to express their ideas and/or emotions. It is important to acknowledge the history of this use as it often was done in a mode of objectification of others (in western art, in particular, women). The awareness of the hierarchical nature of that use results in my conscious effort to collaborate with and/or honor those individuals represented in my work or to circumvent that power structure by utilizing my own form, as I often do. 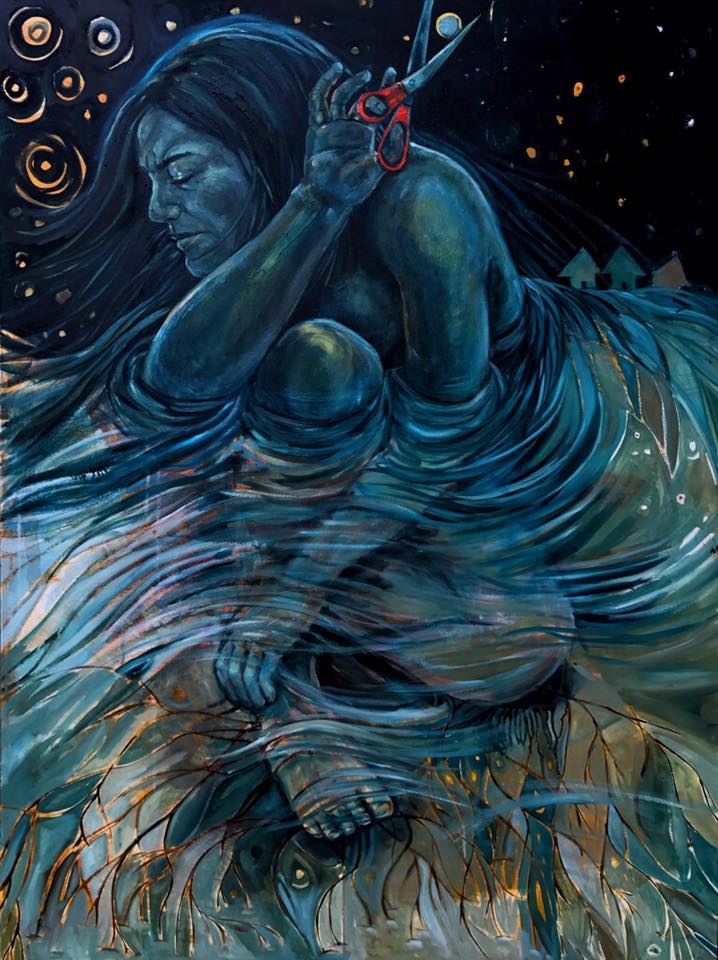 She Snips Away While They Sleep
Oil on Canvas 2016. On View at the Zeitgiest Arts Cafe.

The rewards of my work are numerous, but the main rewards are these: My work allows me to speak my truth, connect with others through that truth, and understand the world I live in better, on a daily basis. She Only Sleeps Under the River
Oil on Canvas 2016. On View at the Zeitgiest Arts Cafe.

My work is currently on view at in the Reframing Ophelia exhibition at the Tweed Museum of Art. I have an exhibition at the Zeitgiest Arts Cafe alongside some of my amazing past students through the end of April. I also have work at St. Luke’s Pediatrics and Holistic Path. My work is most often updated on my Facebook page, but I also have a website, sarahbrokke.com. A documentary of my project, Portrait of an Artist, created by filmmaker Dan Branovan, was screened Feb. 26 at Zinema 2 and will be available online in upcoming months. I also had the honor of creating the cover for this year’s Homegrown Guide, which will be unveiled in the near future. I’m currently working as a teaching artist alongside Shawna Gilmore on a Mural Initiative Project originated by the College of St. Scholastica’s Art Department. St. Scholastica received an Arrowhead Regional Arts Council Arts Learning Grant to go out into the community and work with Harbor City International High School Students and Safe Haven Women’s Shelter to create two large murals. The pieces will be unveiled at the “Still I Rise” concert at CSS April 8. It’s been exciting to work out in the community, and we were lucky enough to work in Prøve Gallery for the whole month of February.

She Cuts Down Trees at Night
Oil on Canvas 2016. On View at the Zeitgiest Arts Cafe.

Bio:
Sarah Brokke, MFA, assistant professor and director of the Art Department at the College of St. Scholastica, was born in Grand Forks, ND, and received her BFA in Pre-Graduate Studio Art from UMD.

During that time she studied abroad in Birmingham, England and Paris, France.

She received her MFA through a joint program between Studio Art Centers International in Florence, Italy and Bowling Green State in Ohio. She returned to Duluth in 2004, where she has since taught at the College of St. Scholastica and the Duluth Art Institute. Thematically, her paintings explore gender roles and traditions, relationships and identity. She has exhibited at many venues locally, as well as nationally and internationally.

Brokke is a 2015 Minnesota State Arts Board Artist Initiative Grant Awardee and work is published in a book Portrait of an Artist by Holy Cow! Press, and is chronicled in a documentary directed by Dan Branovan, which screened at Zinema 2 on Feb. 26. Brokke’s project Portrait of an Artist intended to speak to the contemporary relevance of portraiture as well as the project’s conceptual investigation of gratitude and the impact of artists on one another. 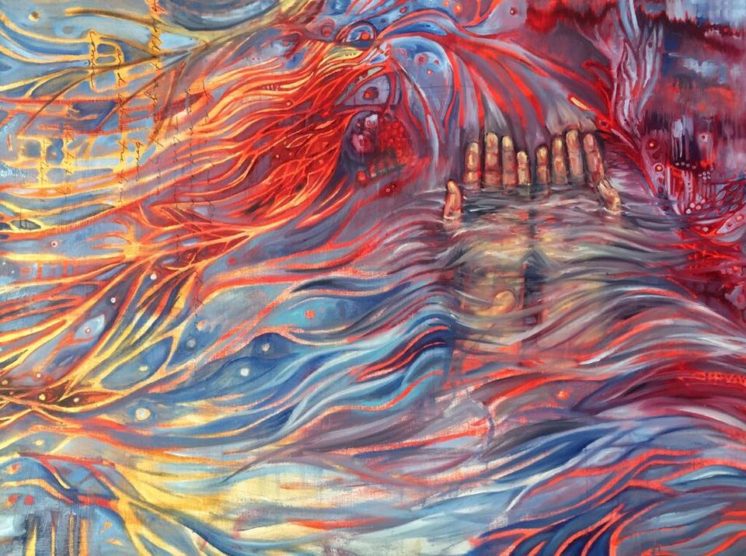 https://www.youtube.com/watch?v=SiSWGRwQods Via WDSE-TV, enjoy the sounds of this old Fitger's Beer ad. The documentary Brew North follows the boom, bust...