M.P.: I am a self-employed artist and facilitator, working in a variety of mixed media for 35 years. I paint, sculpt, do graphics, and photography. Fresh out of Missoula, MT High School art classes, I attended Minneapolis College of Art and Design and worked at Children’s Theatre Company in the properties department. I saw my first MayDay Parade in the late 1970s and fell in love with In the Heart of the Beast Puppet and Mask Theatre (HoBT). I also attended a mask and physical theatre school near San Francisco. Mary Plaster by Michael K Anderson, “Gaia” made for WaterWorks 2009

Mid-college I lived in Mexico four years and learned much more about masks, papier-mâché, and Dia de los Muertos (Day of the Dead) traditions. Eventually I graduated with art and theater degrees from the University of Minnesota Twin Cities (BFA) and University of Wisconsin, Superior (MA). I also worked with Sr. Mary Charles and the Russian Prosopon School of Iconology several years writing traditional spiritual icons, which taught me so much about rendering human faces. That skill has been very useful for making larger-than-life ancestors. My style and medium can change according to what I need because I have such extensive theatre background in scenic painting, properties and costumes; requiring me to adapt to myriad cooperative projects. 8’ tall Prince puppet made for Minneapolis MayDay 2016, Papier-mâché and cloth

The medium I am best known for is papier-mâché. I decided to pursue making giant street puppets fulltime again in the early 2000s when I moved to Duluth because of its sustainable nature using recycled materials, and the ability to make large-scale political statements in parades and protests. I am concerned about the state of the world and work to reflect this in my art. In 2007 I was invited to bring my Green Man puppets to Burning Man in Black Rock Desert, Nevada. In 2008 I was hired HoBT artistic staff for MayDay and did a summer apprenticeship in Vermont with Bread and Puppet Theatre. Fall of 2008, David Hodges, curator of the Duluth Art Institute, hired me to co-curate an art show of USA-made giant puppets that spanned 50 years called, Effigies of Peace and Protest. In that exhibit were many skeleton entities, which have been used universally to illustrate human justice issues. We chose to do the closing reception on November 1st in the spirit of the Mexican tradition of Dia de los Muertos, and European Samhain and Guy Fawkes, parading many of the historical puppets around the Depot and Public Library. We encouraged folks to make art and altars to their departed loved ones and offered face painting. Not many wanted to dress up the first year but multitudes volunteered to animate the street puppets. The evening ended with a small fire ceremony and fire spinning. Public mixing of grief and celebration of life was a great success and I was barraged with requests to make Duluth All Souls Night (DASN) an annual, early November tradition. 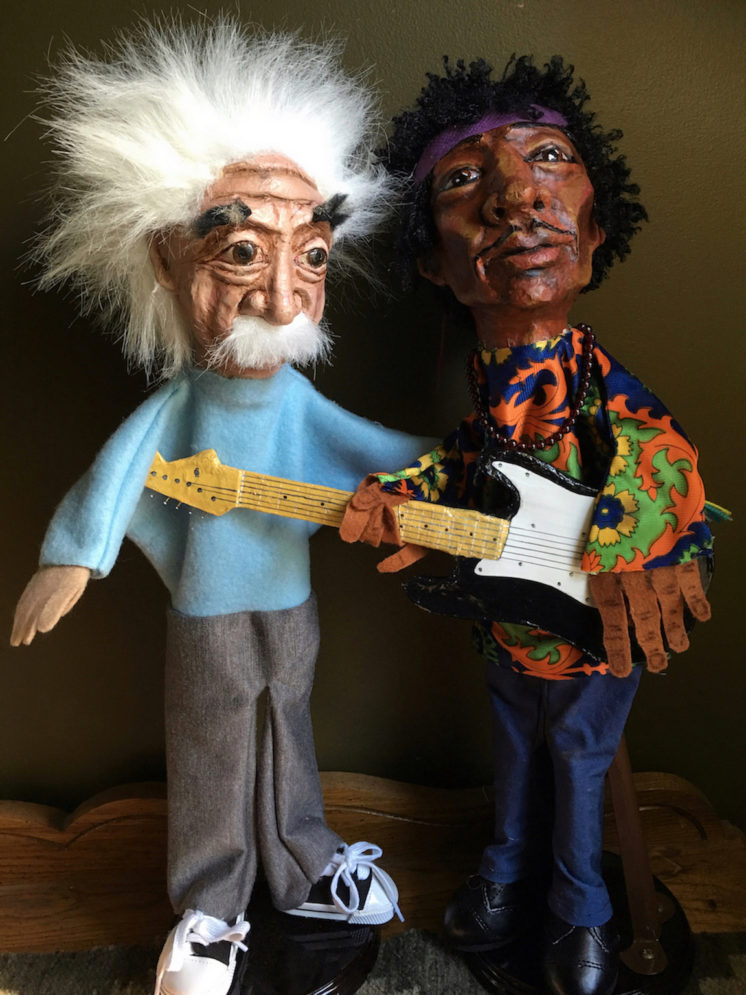 Since then the Depot, a small band of volunteers and I have made a total of eight DASN events. We call it All Souls Night because it is the most inclusive title of world holidays at this cosmological time of year. Experiences of death and rebirth are universal and we welcome displays from all traditions. The freewill donation event has grown with some support from the Arrowhead Regional Arts Council (ARAC) to being able to hire great musicians like Richie Townsend/Kathy McTavish, the Brass Messengers and Red Mountain and pay the fire and tribal dancers, stilt walkers and ritual makers a modest amount. Sadly this year we were denied grant funding so I am not sure we can do it again. It is very hard to find volunteers to help and we don’t want to charge admission. 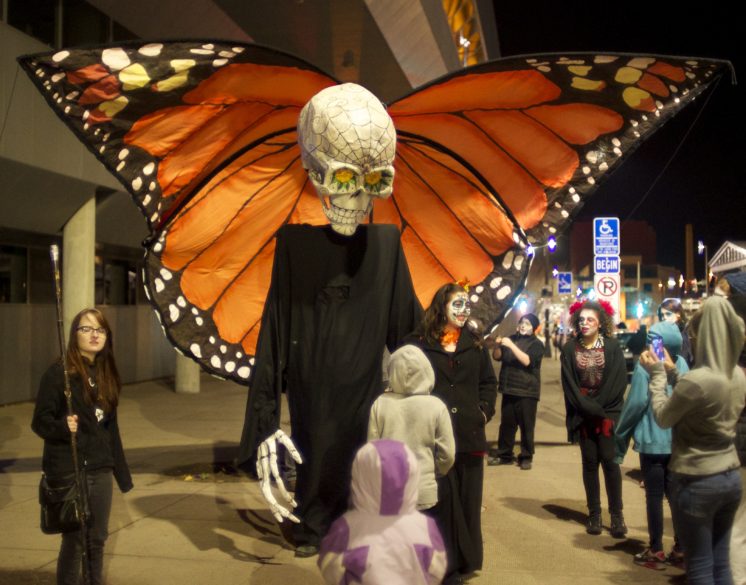 Foreground 10’ Death papier-mâché and cloth puppet made for the first 2008 Duluth All Souls Night (DASN) with background giant Monarch butterfly made for the 2015 Duluth Children’s Museum as an ARAC art project grant.
Photo by Steve Ash

My biggest challenge is the difficulty of paying any bills from my life’s work. I still have school loans! Half of my puppets were not commissioned but made to support causes that I believe in the Twin Ports area, including: Martin Luther King, Jr. and Pride weekend activities, 350.org., Duluth Monarch Buddies and other environmental concerns. Some folks don’t get what I do because it is unusual, but I have wonderful, like-minded friends, meet super interesting people, and have unique experiences at home and abroad.

I am blessed to have an encouraging partner in my husband of 24 years, Troy.

I am paid well in other cities like San Francisco, Louisville, and Austin, MN and have also had some grants from ARAC and occasional paid work from the Duluth Playhouse, Minnesota Ballet, University of Minnesota, Myers-Wilkins Community Collaborative, Together for Youth, and the Children’s Museum. I am now an associate artist at In the Heart of the Beast Puppet and Mask Theatre, which makes for a lot of trips to the Twin Cities to work at MayDay in the spring and other events.

I have started to see some profits online from my icon prints and graphic design T-shirts and window clings and can make jewelry, custom-made hand puppet portraits, and other items.

ArtWorks Festival Featured Artist, Austin, MN, Aug. 27 and 28
I will be in the entrance of the old power plant on 4th St. NE and 4th Ave NE

Duluth All Souls Night at the downtown Depot evening of Nov. 4, 2016?

Next Minneapolis MayDay Festival on Sunday, May 7, 2017 in Powderhorn Park