Ann Klefstad is an artist who is definitely connected to this area, through her work across many mediums and by the writing, promotion and encouragement she’s given to the arts in our area.

AK: I work in sculpture, mostly, with some drawing, including ink and tar drawing on wood. My real “medium”, though, would be my subject matter. Over the years I’ve drawn closer and closer to doing only work that comes out of the ecosystem I’m in. I’m kind of a literalist, I guess. I love the forms of things, and so I use those forms, I try to learn them and come to know them by imitating them, like a kid learns. This image is from my 2014 show in Minneapolis at Gallery 13. It was called “Living Room” (try out all the different ways of reading that–) and featured my 8’x4’ plywood-and-tar panels painted with forest imagery and my life-sized steel deer and wolves, from the body of work called Pack and Herd. The challenge, early on, was to work my way out of the idea of “self-expression” and find ways that other life forms or ways could find expression through me. That took awhile. It started with discovering, first, clay and its difficulties and memory, and then sumi ink and Chinese paper– which taught me about valuing process over result. Then discovering weeds– that was good. The series of paintings I did of backyard plants was likely the first really good work I did. Having faith in what I loved, rather than in the artworld, was important too. Now, the rewards– well, it’s work, right? I’ve had a lot of different jobs, and enjoyed most of them; now making art and words is my work, and it’s only a little scarier and more ecstatic than that foreman job in the bakery. I’m glad that I’m serving what I love. And I’m glad that the lifeworld reveals itself to me because my job is to look at it, for a long time. That’s the gift. This Beaver in her pond of stones is part of the larger work, Estuary Plaza, done for the St. Louis County Government Services Center in downtown Duluth (2nd st and 4th ave W). The plaza needed to be “warmed up,” made welcoming and interesting, particularly as many of the building clients are arriving there under the stress of various needs, and are often bringing children with them. The Plaza has 8 animals and a bronze waterform bench as well as this Beaver (who is actually across the street, by the parking lot, directing people to the crosswalk). They are all animals that inhabit the Duluth estuary.

I have work at the St. Louis County Government Services Center downtown, the plaza at 2nd St and 4th Ave E. The animals and benches there I did. There is a pair of barnyard animals at the Zoo– the memorial for the barn animals that died in the 2012 flood. A steel sculpture at the bus station in Fargo, another in a roundabout in Fergus Falls. There’s big bronze waterforms (that I did with Jeffrey Kalstrom) at Harriet Island Park in St Paul, and a set of stoneware tiles at the same place. A sculpture of hands and water at Lake Superior College. Other things. My website is annklefstad.com. Floodwaters (from 2000) is a large multi-part installation in bronze and stoneware at Harriet Island Plaza in St. Paul, and it addresses the frequent river floods in the neighborhood (the bronze water imagery is set into a gap in the levee that can be closed with stoplogs). The bronze waves were made in collaboration with Jeffrey Kalstrom. Evening, Bay. This is one of my Walk on Water images, printed on a 4’ x 2’ sheet of galvanized steel and mounted on a shaped support. The Walk on Water works are photos of water, taken close to from my kayak or sailboat. You can see more of them at walkonwaterannklefstad.blogspot.com. 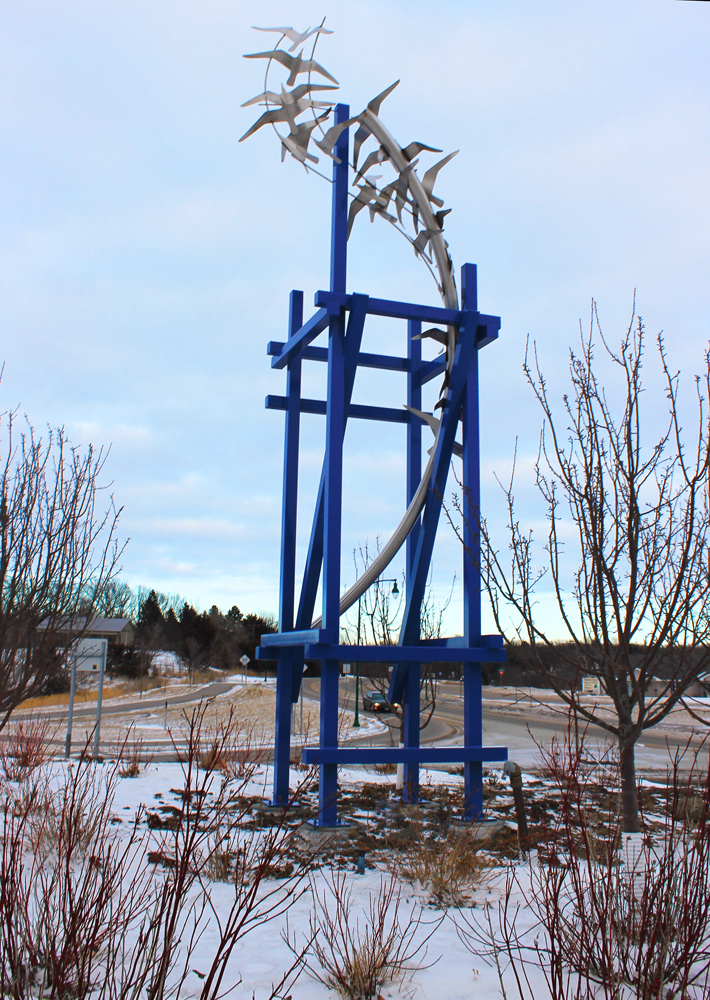 Freedom, a 22’ steel tower for the city of Fergus Falls, to be the focal point in the new roundabout at the entrance to town. It was inspired by the seagulls that follow the tractors through the fields in this ecosystem of farms and lakes. I received this commission as the result of a competition—as is true of most commissions for public artworks. It was finished in 2016.

I will be having a show of ALL NEW WORK along with three friends–Alison Aune, Kirsten Aune, and Arna Rennan–at the DAI in November. I’m also working on a sculpture of a Baikal seal (nerpa seal) for the Great Lakes Aquarium (it will be ready by July 1) and a pair of wall commissions for Central Lakes College in Staples, MN. A couple of other things are in the works, but it’s too early to talk about them yet. The turtle is a central feature of Estuary Plaza. He reminds me of all the turtles I (and my kids) have known as lake-loving Minnesotans. He’s sitting on a piece of local basalt and seems pretty happy! The plaza was completed in 2016.

﻿ Five Mile Rock is located five miles north of Grand Marais (hence the name) and 3/4 miles off the...