This week’s selective focus subject has appeared on PDD before; doing the Robot on every street corner in Duluth. He even made the Best Videos of 2014 list. Even more impressive than his dance moves are his paintings. He’s also an animator and filmmaker. Jonathan Thunder tells about his diverse work. JT: I had a little experience painting in the high school I attended in Brooklyn Center, MN. I worked on a mural in the art classroom that could be considered fairly surreal. My art teacher clued me into the works of artists like M.C. Escher & Salvador Dali and from there I followed artists that took to making images not like a photograph but more anchored in the world that only expression and imagination can create. After high school graduation I moved to Santa Fe, NM in 1999, and studied painting at the Institute of American Indian Arts or IAIA, training under a painter named Norman Akers. His advice influenced me in my approach, scale and style of painting. Large, fast and colorful.

After a couple years in Santa Fe I moved home to the Twin Cites to help my Mother fix up the house I grew up in so she could sell it. During that time I spent a year removed from the influence of the southwest style that I had been steeped in and worked toward developing my own voice. That painting style has more or less been consistent in my work since. I’ve always been a fan of cartoons, comics, graphic novels with tons of black ink, abstract painters, colorists and tragic comedies, and I think that influence shows in my imagery. I try to create images that flow in and out of form as a dream or spirit would. I also work as an animator and short film maker. Largely my short films are the product of watching strange cartoons all of my life, then eventually developing a taste for experimental film. I remember seeing a short film at the Walker Art Center in Minneapolis that featured a nude man shadowboxing on a 45 minute loop. He wasn’t built like an athlete, he had shaggy hair, the film was very grainy in black and white with no sound. It was just odd and interesting enough for me to want to know more about the medium. I started to study film makers, animation companies, and went to school for a Bachelor’s degree in Visual Effect and Motion Graphics. Since then I have worked on several short films in collaboration with others as well as produced a couple of my own small vignettes. I like to think the two formats I work in, animation and painting, feed each other. 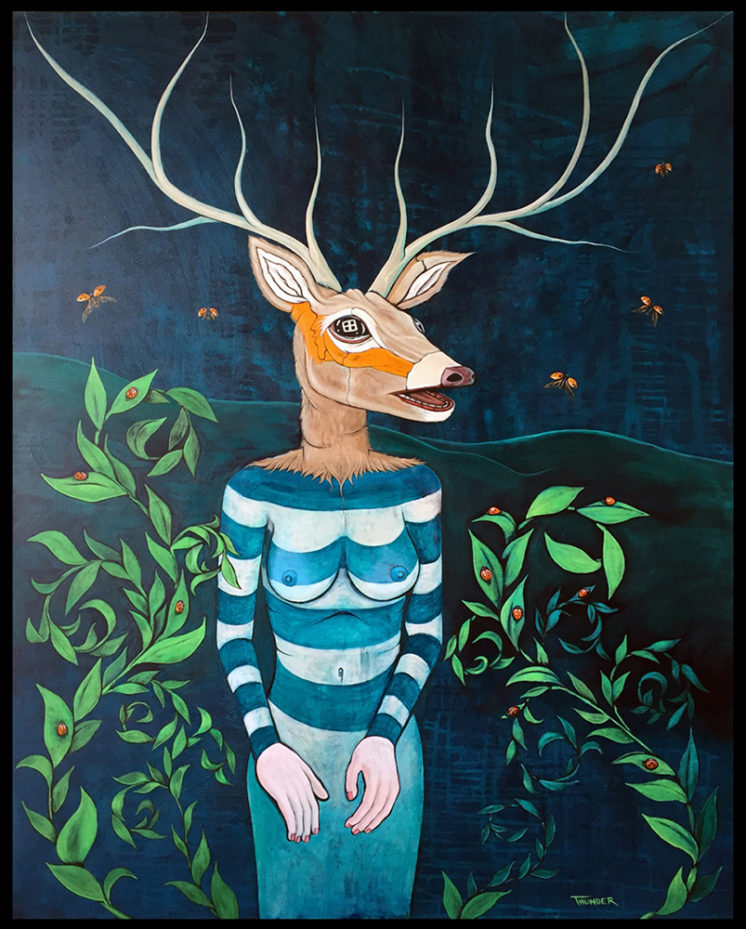 If you start the clock at the time I began exhibiting work I’ve been painting since 2000. That’s when I first had the opportunity to enter a group exhibit in Santa Fe, NM. With video and animation I have been working in that medium since around 2003. For me, my personal experience is that I was set on this path early on in life, and life, for any person in any field is a challenge. The artist way is one of seeking my own voice and learning to be comfortable making that voice heard on a public level. I have encountered criticism and even censorship, most of which I took as not only a challenged to get past but a lesson, and in some cases a good story to tell later.
During my first solo exhibit in 2003, I was so nervous that I couldn’t bring myself to go into the gallery. I stood outside the door building the courage to walk in there, and the start time had already passed by several minutes and counting. Eventually a man came outside to have a cigarette. It was dark out. I asked him, “how is it going in there?” with butterflies in my stomach. He said, “Good! But we haven’t seen the artist yet.” to which I replied, “He’s coming.” So with a few deep breaths I walked in. That was a challenge. The rewards of this line of work have presented themselves in the form of great moments of inspiration, getting to meet a large number of amazing artists and art supporters, traveling to destinations I wouldn’t have guessed I would be, learning, and having the opportunity to inspire and give back to our community and future generations.

You can see more of my paintings and animations/short films online at thunderfineart.com or on facebook at www.facebook.com/ThunderFineArt
You can see my vimeo page at https://vimeo.com/jonathanthunder

Also, I’m currently exhibiting through the month of May at the Zeitgeist Arts Center in downtown Duluth with the show “Underwater Dreaming Bunnies”. An exhibit featuring some paintings that I have created within the last year, some of which were made while I was on artist residency in Santa Fe in Feb and March.

I also have paintings on display at the Wakaja Gallery in downtown Santa Fe, NM.

I’m planning to head down to Santa Fe, NM in August for the annual Native Cinema Showcase where I have shown my collaborated animations for the last 2 years. I also plan to keep working on my paintings and animation work as it comes.

https://vimeo.com/120989157 The short film Meat, directed by Michael Forstein and shot in Duluth, premiered online this week on the Short...