You probably haven’t heard of KTWH-FM of Two Harbors 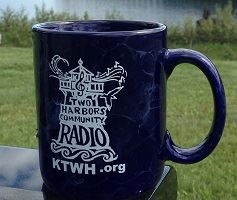 There’s something amazing going on at a little community radio station in Two Harbors. If you haven’t heard of KTWH it is most likely due to its recent arrival upon the airwaves and its status as a low-power community radio station. If you live outside of its broadcast range, streaming online will be your only recourse, but it is well worth the effort. It is something I haven’t heard since the advent of FM in the early 1970s. DJs playing music that has merit and meaning rather than having the potential for being the opening theme song for the new CSI, set in Bugtussle, KY.

For those of you who are too young to remember when FM began to supplant AM as the dominant radio spectrum, let me take you to school. The AM radio dial was crammed full of stations serving a limited number of musical genres plus sports and news. The quality of the sound was horrible; full of static, it imparted a tinny quality to everything much like a bad cell phone connection, other stations constantly bled through due to its only redeeming quality. A signal could be bounced off the ionosphere and gain incredible range but also made it more prone to interference.

FM was line of sight, clear, bright, crisp, and just like Steely Dan said “no static at all.” Compared to AM it was like the band was playing live in your car or living room. But what really made FM a hipster utopia was that almost nobody was listening due mainly to FM capable radios not being standard equipment in American vehicles at the time. This gave DJs a kind of unlimited freedom to play whatever struck their fancy. Genres and artists that had been relegated to college radio now found mainstream audiences. To a teenager in the ’70s it was the Great Age of Discovery. Reggae, funk, heavy metal, fusion, punk, Kraftwerk, Scott Joplin, Frank Zappa, Leadbelly, Herbie Hancock, Afrika Bambaataa. Every day was like Christmas. But FM audiences grew in size, this attracted advertisers, and the stations narrowed their focus to the lowest/highest common denominator.

Because of this and the proliferation of digitized music over the past 20 years a lot of people might say that broadcast radio is dead. That it has no place in the modern world. The fanfare over and positive reaction to Duluth’s acquisition of the Current seems to turn that theory on its head, at least locally. I think this premature pronouncement of death to be wrong for another reason.

Broadcast media’s greatest underutilized strength lies in the variety of programming that is gently forced upon the consumer. Left to their own devices, most people tend not to stray too far from their preferred genres of entertainment. This is true for myself as much as it is for anyone else. Scanning through Netflix’s parade of thumbnail movie posters and two-sentence movie descriptions I will often succumb to the tyranny of choice, swipe past a movie thinking it would not hold my interest, only to end up watching (and enjoying) it when it goes into heavy rotation on one of the cable channels. Broadcast radio serves the same function. Many artists that made it into my personal collection were a result of having tuned in to a station like Radio K in the Cities or The Current and heard something that piqued my interest enough to learn more about the artist responsible.

Those rare gems that cause me to prick up my ears happen on a fairly regular basis while listening to KTWH’s musical programming. I find it difficult to get much work done when one of “my shows” is on because I am constantly hanging on the DJs every word after a three-song set to find out the name of the artist played. Reverend Peyton’s Big Damn Band, Sturgill Simpson, and the GrooveGrass Boyz are some of the groups involved in my “WTF is this?” moments. All belong to genres I don’t normally peruse for new material.

I used to think I knew quite a lot about music and its history, but I am pleasantly surprised to find out I missed quite a bit. I feel as a listener I am gaining an education as well as being highly entertained. Aside from their encyclopedic knowledge of music and it’s history is a sense of how each song played should build off the last one and lead into the next. It is one thing to string together a series of tunes by their BPM rate and their bass levels like most college/club DJ’s do, or write an algorithm that hopes for an alchemical mix of sub-genres, but to weave a tapestry of musical history and thematic costumes requires a level of passion that has been all but drummed out of the industry by technology and corporate greed.

Some of the programs that showcase the variety of musical interest and expertise of the KTWH DJ’s are:

Harvest Program – a journey through the history of recorded music over the past century
The Hotdish Imperative – A cooking show set to music
Ektoplazm Eargazm – Bruce the Moose serves up some sizzling EDM.
Digital Vinyl – An eclectic mix of punk and alternative.
Northwoods Archive – Music from musicians of the Great Lakes area.

Music isn’t the only programming provided throughout the day, but it is what I am most passionate about, so that’s all I can really speak to as a fan. If you find yourself in Two Harbors tune into 99.5 FM, or if elsewhere on the globe point your browser to ktwh.org and click on the Listen Now button.

Who are these girls? What basketball team were they on? Why were they in a photo shot in 1911 on...