Marian Lansky is part of the team the operates the Kenspeckle Letterpress, one of the most interesting, fun studio/shops in town. It combines centuries-old art processes with modern technology to create loads of great work. There will be an Earth Day open studio and shop on Saturday, April 23, from 11 a.m. to 4 p.m. on the second floor of the DeWitt-Seitz Marketplace, an opportunitity to stop in and see the work and meet the artist. Marian and her husband, Rick Allen, will also be a part of Siivii’s Earth Day show, just across the alley from DeWitt-Seitz.

Below, Marian explains her work and process in her own words. Numinous Grove
This one is inspired by Australian Aboriginal dot paintings. You’ll find dots in much of my work. They are a recurring theme.

ML: After being a freelance graphic designer and sitting at a Mac for 25 years, it feels natural for me to create digitally — more natural than it does for me to use traditional media. I do, however, want my work to look like traditional media, so there’s a little duplicity going on here, for sure. At this point I am working on a Wacom Cintiq, which is essentially a monitor that lies flat, which you draw on with a stylus. It is as close to paper and paint as I’ve come, while still giving me the ability to easily change my mind.

I print my work in-house on Epson giclee printers, which can print up to 42 inches wide and give me the ability to work at a larger scale than my actual studio space allows. Since I eased out of graphic design I’ve been experimenting like crazy, which is why I don’t appear to have a set style — at least not yet. My main concern is always color and pattern. I like to think that instead of portraying nature, I’m responding to the patterns behind nature. Color, to me, is almost like music. It’s a language of its own and I find that color can be healing, nourishing, harmonizing and enlivening in the same way that music can.

I’ve done a fair amount of commissioned work for Essentia Health/St. Mary’s Hospital, where my work can be seen in the lobby, cafeteria and staff library. I also have quite a few pieces up at Amberwing, at Northwood Children’s West, the Building For Women and Republic State Bank.

In addition, my work can be seen on the website I share with my husband, printmaker Rick Allen, kenspeckleletterpress.com as well as in our studio shop on the second floor of the DeWitt-Seitz building in Canal Park, at Siiviis in Canal Park, and Sivertson Gallery in Grand Marais. 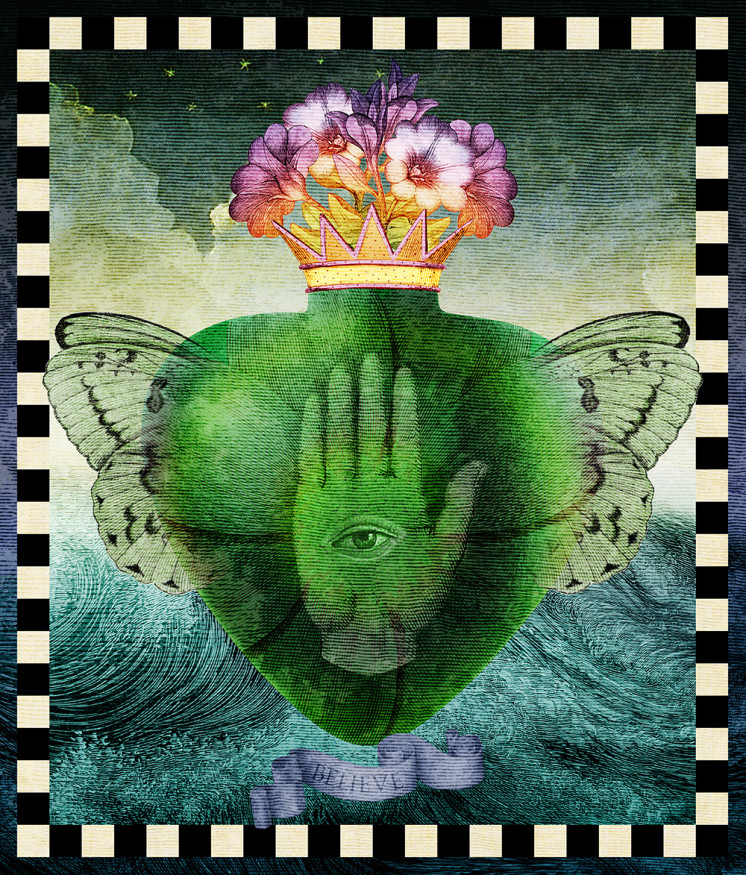 Believe
Two winters ago I became fascinated with the Milagro hearts of Mexico and Ex Voto sacred hearts of Europe. Believe is one of a series of eight such hearts I completed then. Acclimating to a Higher Frequency The Grid Fills In
The above two are part of my currently ongoing series of mandalas. I have always loved the mandala form and am just beginning to explore it.

https://www.youtube.com/watch?v=P6_BJopwjN8 Video filmed in Chester Creek not too long ago.