A few random facts about the band:

* First gig was at the Recyclabell in Duluth in the summer of 1993.

* Last gig was at the North Star Liquor Lounge in Superior in the summer of 1998.

* Reunion show at R.T. Quinlan’s Saloon during the Homegrown Music Festival — May 7, 2011.

* Before Puddle Wonderful, Conley and Gaynor were in the cover bands Nobel Savage and Young Goodmann Brown.

* Puddle’s first recordings were cassette demos: Sucks to Be You and Snuff.

* Other frequently covered tunes: “Message in a Bottle,” “Home Sweet Home,” “Nightshift,” “Everybody Wants to Rule the World.”

* First full-length album released on CD in 1995 — Sweetly Unnecessary (credit Jack Kerouac for the title). Band members financed the album themselves, used the art from a cardboard insert for a shower cap on the cover, and spent three hours before the disc’s release folding inserts. About 400 copies were sold.

* There was a Puddle Wonderful fan club called the “Puddle Girls,” which consisted of a couple of Northwestern High School students. They are pictured on the back cover of Sweetly Unnecessary. 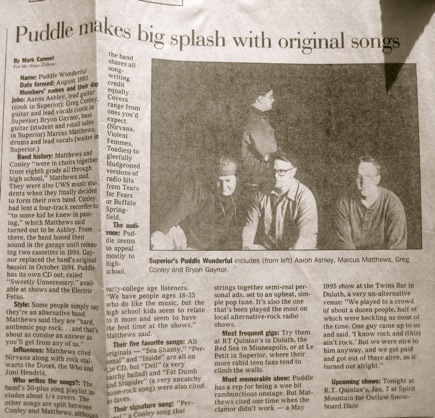 * The band broke up before its second full-length album, Barely Legal, could be released.

* A collection of Puddle Wonderful recordings is available for free download on Bandcamp, via “The Virgin Marcus” Matthews.

Kim Bullard, Elton John's keyboardist, was at the Brewhouse Thursday night playing with Jessica Myshack. The rumors are true. Who...