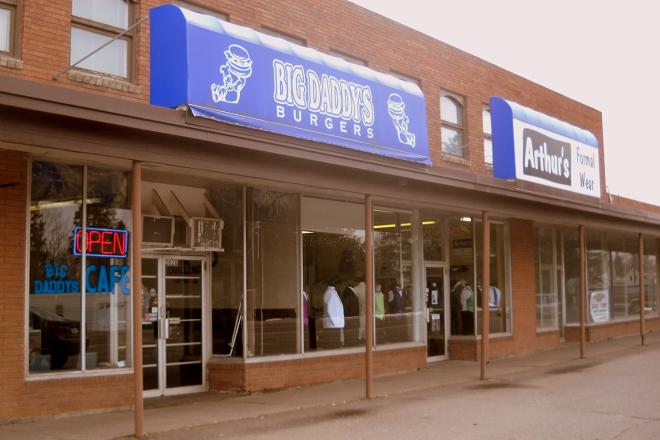 By popular demand, we chose Big Daddy’s Burgers as the next location in our “Breakfast in Duluth” series. Because it’s located next to Arthur’s Formal Wear in the Piedmont Plaza, we considered renting tuxedos so we’d look good while scarfing down our omelets, but unfortunately that wasn’t in the budget, so we kept our regular clothes on and, as usual, looked like a couple of fools.

Why did Big Daddy’s not meet the qualifications of our initial post on breakfast diners? It does not have booth seating, which is part of the very definition of the word “diner.” Though it’s not technically a diner, it does have a good diner vibe. There is counter seating available and 100 percent of the customers were old men when we walked in the door. Note that behind the counter, above the Pepsi cooler, is a complete collection of faded Minnesota Twins Wheaties boxes. This stuck out to us because, although these items are the most common collectibles in Minnesota, we generally only see one displayed at any given establishment, rec room or estate sale.

Our theory is that most people who kept a box from 1987 realized by 1991 that it was kind of a cheesy keepsake, so they didn’t want another one. But they couldn’t just throw away the one they held onto for four years, and they couldn’t sell it because it was, as previously stated, the most common collectible in Minnesota, and therefore generally considered to be worth about eight bucks. So the only thing to do with a Twins Wheaties box is hold onto it for your entire life and make your grandchildren recycle it. But we digress.

As appetizing as the 25-year-old Wheaties looked, we decided against ordering cereal. How could we sit at a place called “Big Daddy’s” and order anything that has less than triple the recommended daily caloric allowance? Especially while sitting near a wall of photographs featuring people proudly celebrating the achievement of eating like wild boars. The breakfast prices at Big Daddy’s are somewhat high, but considering the portion size it probably evens out if compared to other establishments by plate weight. A typical cheese omelet in Duluth runs $5; Big Daddy’s sells them for $6.99, but you can’t eat more than $5 worth without needing help up from your chair like James Brown. Coffee is typically $1.15; Big Daddy’s sells it for $1.25 but leaves a pot at your table to stimulate your feeding synapses and to thin the cholesterol-laden blood, which is now slowly oozing through your veins. Don’t take our wisecracking to mean we don’t like Big Daddy’s Burgers. On the contrary, you little conclusion jumpers, we love it. Old men and good breakfast food — what’s not to love?

(We also love Big Daddy’s Muffler in West Duluth, but that’s another story.) One might assume a place with a name like Big Daddy’s Burgers and a gimmick like the Belly Buster must be a chain — and indeed there are numerous restaurants of the same name across the country — but this one is independently owned by Duluth’s Dave Gonhue and has been in business for 10 years.

Could a chain restaurant owner flaunt his faith like Gonhue does? Of course not. Bible-themed artwork adorns the wall opposite the counter, a constant reminder that if you eat here regularly you’ll be seeing Jesus soon.

The heartthrob, his bride

The pomp of musicians, and why we care Jill Lawful Associated Press DULUTH--Poor Kristen Jacobs. She's not just marrying a...