Something curious popped up in the last couple months, via Facebook.

Finally, a burrito joint in the Twin Ports. I’ve been waiting so long … hopefully Chipotle catches the hint?

If this is actually real, it’s interesting how the Duluth burrito market went from 0 to saturated in a matter of months. Sure, we had/still have Burrito Union, but I haven’t ever exactly heard rave reviews for the place, nor have I ever generated rave reviews myself after going there. The two new burrito establishments are handy to have around for decent food in a quick pinch, but nothing earth-shattering. I frequent one or the other a couple times per month. I haven’t bothered to set foot in Burrito Union in at least two or three years.

After creeping the corporate website for this new Sweeto Burrito, it appears that its food differs vastly from the current three options, but perhaps not in a good way. The tacos look OK, but the ambitious burrito combinations don’t exactly seem to be my cup of tea. If this new restaurant comes to fruition, will it hold its own against the other players? How many burritos can a smallish city consume? Apparently a lot, judging by the line that forms outside the Chipotle almost every time I drive by.

Chipotle and Qdoba coming to Duluth

Update: The UMD Statesman report seems to have been in error. Numerous other sources have reported it is Qdoba that is locating in Bluestone Commons. Both Qdoba and Chipolte are expected to open in summer 2014.

So here’s one more post where folks can comment about how having chain burrito joints come to Duluth either completely fulfills us as people and as a city, or how everyone who gets excited about it is some kind of rube. Get it all out of your system now, if you haven’t already on Facebook.

Chipotle coming to the Twin Ports! (?)

I have it on decent authority that work is being done right now to bring four or five Chipotle restaurants to the Twin Ports area. My source says that one of the stores is destined for Cloquet and the rest are going to be in Duluth/Superior.

I won’t get too excited until the doors open, but I think many will agree that this is a long time coming for this area. No more trips south just to get a burrito (yes, I’ve done that). 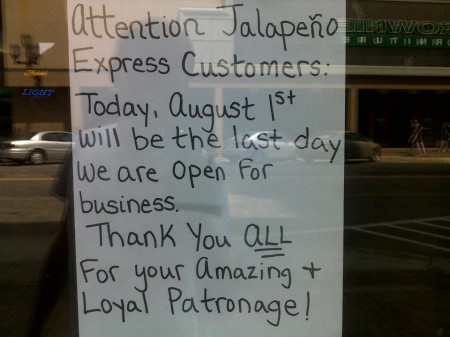 Remember all the ranting and raving about the greatness of this place? What happened?

(Click the menu to see it in a larger, more readable format.) 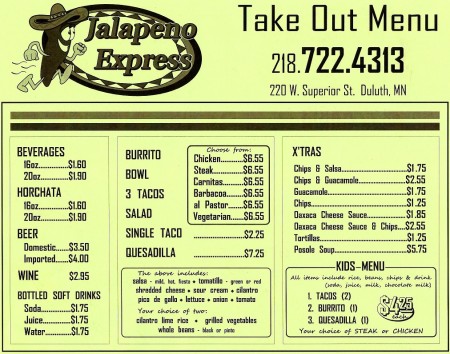 Jalapeno Express has finally opened downtown in the space where Maya Mexican (and Grapevine Cafe, and Taj India, and Mr. Nick’s) used to be. My husband and I caught them in the middle of their “soft” opening and partook of a couple of burritos. Due to some confusion while we were ordering, we ended up with some extra food. I’m pleased to say that Duluth now officially has a legitimate answer to Chipotle. The chicken was good, the carnitas was good, and the al Pastor was terrific as well. We added some awesome cheese dip, chips and a rice drink called “horchata” (which was suggested by the staff). I work nearby, and I think I’ll be hitting them up for quick Mexican at least once or twice per week!

I’m a huge proponent of locally owned businesses. I feel that they generally do what they do better than their franchised competition. Because of this, I’m totally cool with paying a higher price.

I’ve been to Burrito Union probably close to a dozen times, so in no way am I staking any sort of claim, but I can count on more than one hand how many times I’ve placed an order, only to have it incorrectly made. Never anything to the point where I won’t eat it, but when I pay something like $2.25 extra for something like adobo sauce and I don’t get it, I have to ask why? Why would you forget to add a topping that costs between 20-25% of the cost of a customers burrito? Especially when its a delivery order.

Again, this wouldn’t be such so bad if it were a one-time occurrence, but when the majority of experiences is like this, it really puts me off. I’m a real big fan of Tim and Rod’s other ventures and look forward to Tycoons, but I really hope service comes before ambiance.