Renegade Comedy Night at Peasantworks Porch above Hell’s Kitchen in Canal Park. 8pm. $5. That is all.

“This play takes your guts out.” – NY Times 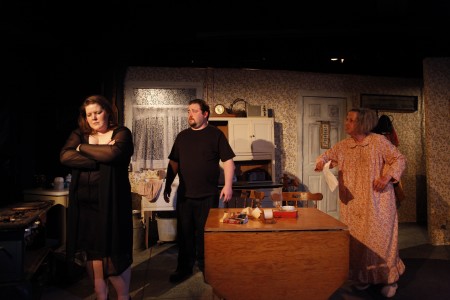 In the mountains of Connemara, Ireland, lives Maureen Folan, a 40-year-old spinster. Her sisters have long escaped into marriage and Maureen is stuck caring for Mag, her aging, manipulative mother. When a man shows up on their doorstep offering Maureen a last chance at happiness, Mag interferes, setting in motion a chain of events leading to a shocking, terrifying conclusion.

The weekly Renegade Comedy Nights have been playing to packed houses for over a month now, and if you haven’t seen one yet, now’s your chance! Catch a full evening of comedy from the area’s finest, funniest improv performers for only $5!

Tonight at PeasantWorks porch above Hell’s Kitchen in Canal Park at 8pm.

A full evening of improv comedy for less than the cost of a movie. And we promise we’re WAY better than that Paul Blart: Mall Cop thing. How soon into that movie do you think someone rhymes his name with “fart” – 10 minutes?

We get to those type of jokes in like two minutes flat.

Another friday night, another night of improv at the PeasantWorks Porch brought to you by Renegade Comedy Theatre. The show’s at 8pm and it only costs $5 for a full evening of funny.  You really can’t beat that.

Sure, there’s another show playing right now that promises a news anchor in a thong, but we’ve got Jody Kujawa. You never know what body part he’s going to shove in your face.

Looking for some cheap laughs this Friday night? Come to PeasantWorks Porch above Hell’s Kitchen in Canal Park for an evening of improv comedy for only $5!

The area’s finest improv comedians provide high-caliber hilarity right off the top of their heads based on suggestions by you.

The show’s at 8pm; we can’t wait to see you there! Just a reminder that there are only two weekends left to catch this outstanding comedy by Pulitzer Prize-winner David Lindsay-Abaire.

Visit www.renegadecomedytheatre.com for more info or call 218-336-1414 for tickets. 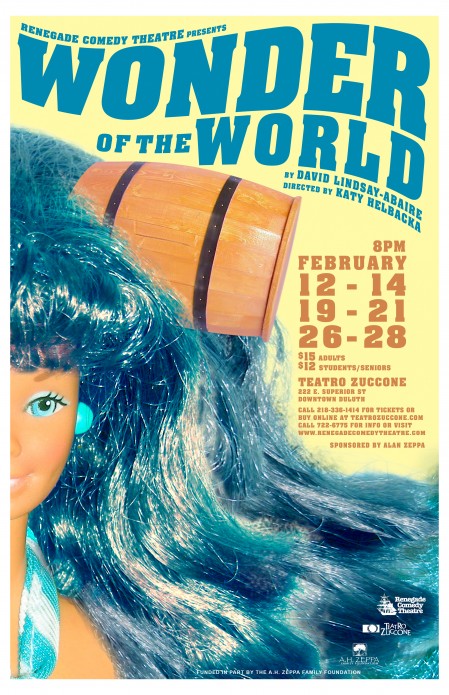 RENEGADE KICKS OFF 2009 WITH A BARREL FULL OF LAUGHS!

(Duluth, MN) – Renegade Comedy Theatre is proud to announce the kick-off of their 2009 season with a production of Pulitzer Prize-winner David Lindsay-Abaire’s uproarious comedy smash, WONDER OF THE WORLD! This production runs Thursdays through Saturdays, February 12th through the 28th at the Teatro Zuccone in downtown Duluth. All performances are at 8pm and tickets are $15 for adults, $12 for students and seniors. Call 218-336-1414 for tickets or purchase them online at www.teatrozuccone.com.

The play follows Cass, a young woman who finds a secret in her husband’s sweater drawer so shocking that she has no choice but to leave him and begin a frantic search for the life she missed out on. Armed with only a suitcase, some jello molded in the shape of a fish and a list of all the things she wants to do before she dies, she boards a bus bound for Niagara Falls. What follows is a hysterical adventure as Cass befriends a blithely suicidal alcoholic, finds true love with a lonely tour boat captain and tries to avoid her husband and the pair of bickering private detectives he’s hired to track her down. Will Cass find a new life or take a barrel ride over the falls?

“I rarely laugh out loud when I see plays, even less when reading them,” admits Artistic Director Katy Helbacka, who’s directing the play. “But when I read this play, I laughed out loud … a lot. This is one of those rare plays that features an abundance of strong roles for women. In theatre, there is a large disparity between the number of actresses and the number of good roles. As an actress, I can attest to how boring it can be playing the damsel-in-distress, the girlfriend or the sassy best friend. This play offers our local talented actresses the chance to take the lead in telling the story. The men are the supporting cast this time. In this show, it’s all about the ladies!”

“We felt this was the perfect show to kick-off our 2009 season, as it reminds audiences that Renegade is committed to entertaining our audiences. As it has been for the past 17 years, a large amount of that entertainment comes from making people laugh, and that won’t change. This show serves as a reminder of what we do best, but also offers a peek into the new direction we’re heading with attention paid to the technical aspects of productions as well as a desire to tell moving, fascinating and meaningful stories in a fresh, bold, new way.”