When Duluth National Bank held the grand opening event for its new building on Sept. 16, 1922, newspapers touted it as “a triumph of artistic design and architecture,” and “a model and a monument to the craftsmen who planned and built it.” A century later, the structure in many ways remains in grand condition, but without a defining tenant. Titanium Partners, the building’s new owner, hopes to change that.

“It’s Duluth, right? We have a lot of cool old buildings. This one definitely caught our eye,” said Jesse Carlson, a commercial specialist with Titanium Partners. He said he put the “for lease” sign in the window just a few weeks ago.

“We’re trying to identify what the highest and best use is,” he said. “It’s a fantastic location — 20th Avenue West, right off the highway.”

Carlson said the building has law offices and an accounting office on its upper floors, but the ground level is vacant.

Although the architectural rendering above, from the Duluth Evening Herald, referred to it as “Duluth State Bank” in 1921, by the time the building at 2000 W. Superior St. opened in 1922 it was Duluth National Bank. The business was founded in 1910 with a Minnesota state charter and was originally located on the other side of the avenue, where its parking lot is today. It was granted a national charter and became a member of the Federal Reserve System a few months prior to the opening of the new building, hence the name change.

The bank was purchased by First Bank Stock Corp. circa 1956 and later changed its name to First Bank West End. In 1959 a drive-through was added at the rear of the building, making it the first bank in Duluth to have such a service.

In the 1990s, First Bank merged with U.S. Bank, which continued to operate the Lincoln Park neighborhood branch until 2020.

Titanium Partners bought the bank building in July 2021, along with the neighboring building at 2002 W. Superior St. and a 30-spot parking lot across the avenue from the bank and adjacent to the All American Club, for $600,000.

The building next door to the bank is also 100 years old. It was originally the Melin & Landin furniture store, and held its grand opening on the same day as the bank. Twin Ports Spay/Neuter occupies the ground floor of that building today, with artist studios on the second floor. Carlson has sketches from 1959 showing plans for the bank’s expansion into the former furniture store building.

“The party walls are open on both the first and second floor,” he said, noting the potential for a single large business to occupy both buildings, though he said the intention at this time is to just lease the available space. “We could do a major overhaul and renovation — completely change the use — or continue to rent it out to commercial tenants, which is kind of where we’re going with it now.”

Carlson said the spay/neuter clinic building still has some old décor, including a clock that was likely installed during the First Bank era. It’s century-old exterior architectural features are either lost or covered, however.

But it’s the original bank structure that’s the attention grabber.

“The building is of white Bedford and Rockville granite, concrete construction, reinforced with steel, and is absolutely fireproof,” the Herald reported on the eve of the bank’s grand opening, listing the numerous local companies that provided materials, fixtures and furnishings. Johnson & Carlson was the contractor on the project, working from the plans of the Ellingsen & Erickson architectural and engineering firm. Carlson said the bank’s vault is one of the features that truly sets the property apart.

Constructed by Diebold Safe & Lock Company, the vault is made of manganese steel. “The safe has successfully withstood the efforts of professional cracksmen recruited from penitentiaries by special permission of wardens, who were given every opportunity, device and time to work on the massive door and combination locks,” the Herald noted in 1922.

The vault contains 2,975 individual safety deposit boxes of various sizes. Most appear to be original, while some sections have a different number style on the plates and were likely added later.

“It’s all there in mint condition,” Carlson said. “It could make for an excellent wine cellar for a restaurant or be a place for a special VIP table. We swing the vault door open and the backside is all glass, so you can see all the mechanisms and gears inside. It’s pretty cool.”

The lease listing on crexi.com specifically mentions the former bank as an “ideal location for a restaurant, brewery, cidery, distillery, or similar inspired endeavor.”

High windows on the northeast side of the building allow for abundant natural lighting. The space is a bit stripped down following the removal of some materials from past remodels.

“The potential to bring the original décor from the ’20s and improve and repair that original décor is very real,” Carlson said. “We pulled down the (drop) ceiling to reveal the old ceiling, which is still intact, which we’re very excited about. So, for any user, they have the ability to really have some interior décor that you just can’t afford to do ground-up anymore.” Carlson said the process of finding a user has just begun, so planning can remain flexible.

“We’re willing to do upgrades,” he said. “We kind of have to the way the building is set up. We plan to do renovations improving the infrastructure — electrical, heating and cooling.”

Across Superior Street from the former bank is an open lot where the Esmond Building, constructed as the Rex Hotel in 1913, burned in January and was demolished in February. So while the Lincoln Park Craft District lost one century-old piece of architecture, another is poised for resurgence.

“Part of why we bought it is to be kind of a part of Duluth history,” Carlson said, “and it’s such a great building. 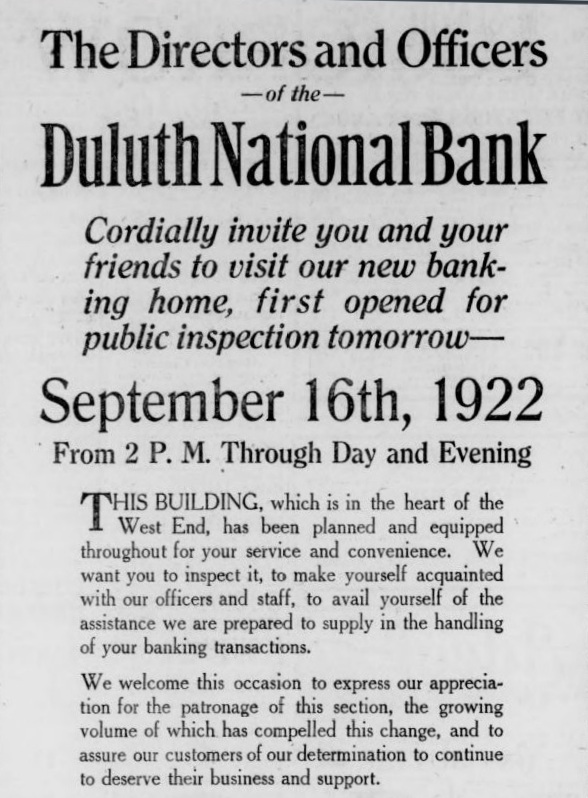 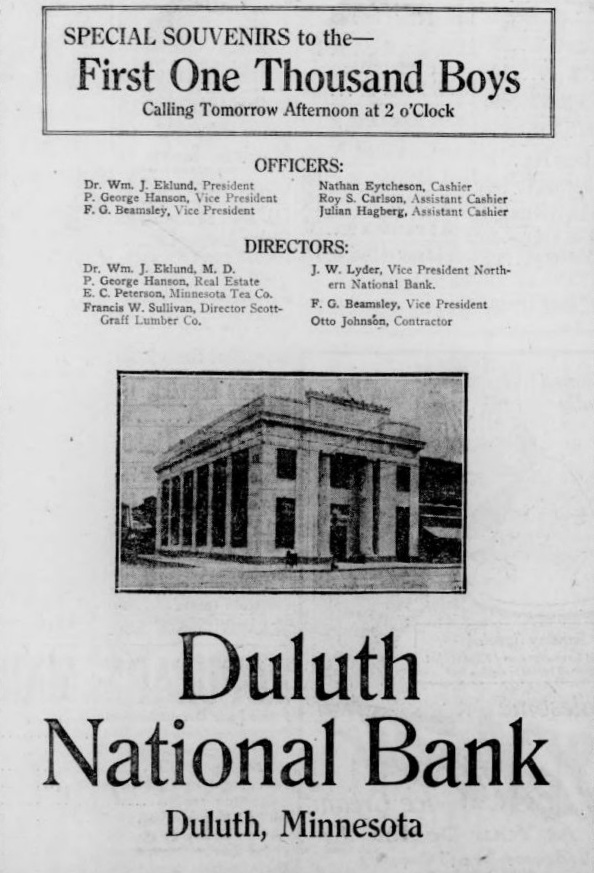 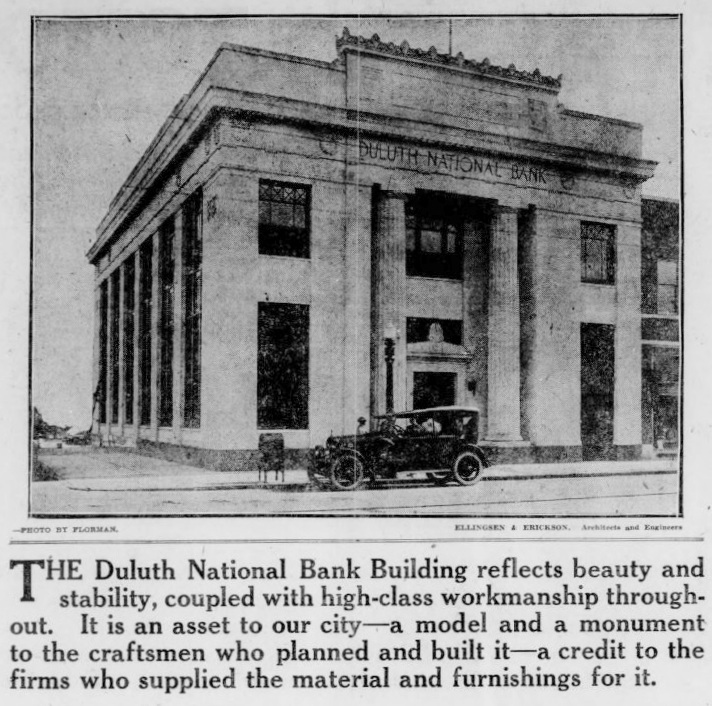 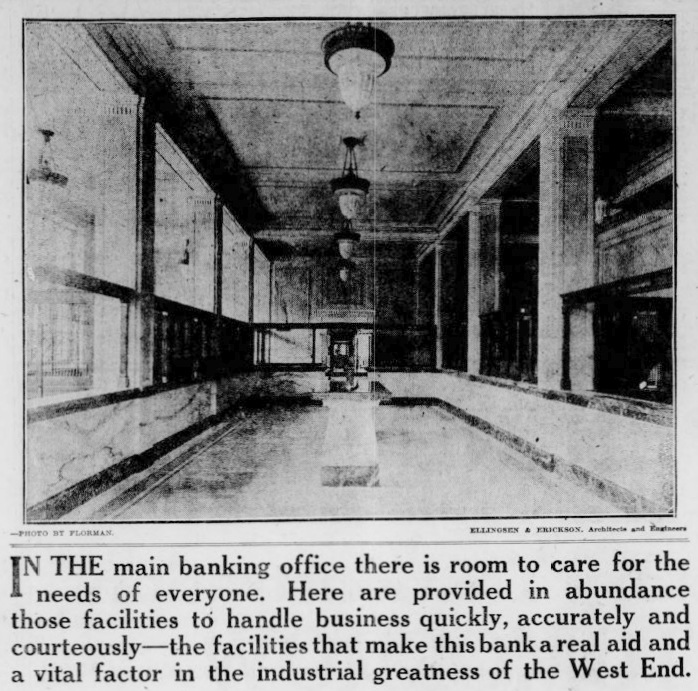 The legendary Frank Lloyd Wright may not have been the architect but his influence is all over a striking little...