Video Archive: The First Half-century of Goldfines in Business

This 50-year-old film is a sort of unproduced mini-documentary about Duluth’s Goldfine family, with particular emphasis on their roles as civic leaders. The family’s entrepreneurial story in Duluth goes back to 1922, so it can be viewed today as marking a full century of Goldfine family enterprises in the city.

The film opens with the matriarch, Fannie Goldfine, remarking about launching a cattle-buying business with her husband Abraham in 1922. The second segment is footage of the ribbon-cutting at the Grand Rapids Goldfine’s store in 1972. The third segment is more with Fannie and her son Erwin. The fourth segment features Manley “Monnie” Goldfine presenting to the Twin Ports Press Club on plans for developing Spirit Mountain. The fifth segment is more with Monnie, speaking from his boat as he exits Drill’s Arena Marina and passes the then-six-year-old Duluth Arena-Auditorium on his way into the harbor. The film ends with Erv sharing how much fun the family was having operating its businesses.

Where did this film come from? The prevailing theory is that it is raw footage of a KDAL-TV shoot for a news package on the Goldfine family’s 50 years in business, but it could be collection of footage for different news packages and not originally intended to be pieced together. John LaForge, a prominent figure at KDAL at the time, appears in the Grand Rapids segment, so that’s why KDAL is the likely source of the clips. Perfect Duluth Day acquired the footage via a videocassette at Beverly Goldfine’s estate sale in 2019. 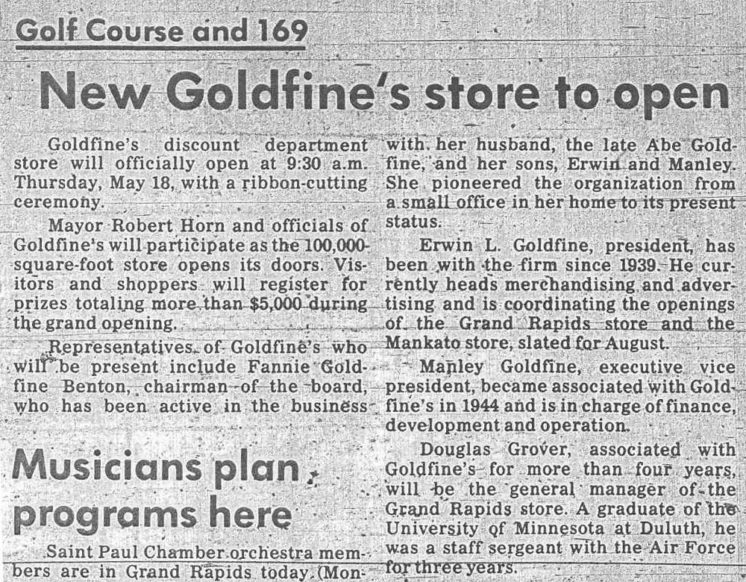 The various enterprises of the Goldfine family are too numerous to briefly summarize, but some of the key points are:

Following Abe’s death in 1950, his sons Erv and Monnie became partners in the family business with Fannie. In the decade that followed their store became the area’s largest seller of furniture, carpeting and appliances. In 1962 they opened Goldfine’s by the Bridge, a 132,000-square-foot department store on Garfield Ave. In the early 1970s, Goldfine’s stores opened in three other Minnesota cities — Grand Rapids, Mankato and Willmar — and two Iowa cities — Sioux City and Des Moines.

In the late 1970s, Erv and Monnie established a hospitality company, operating the Best Western Downtown and Edgewater motels in Duluth. By 2002 the company owned or operated 38 motels in 16 states. Erv died in 2002; Monnie died in 2009. Their ZMC Hotels business was sold in 2015 to California-based Hall Equities Group.

Along the way there were numerous other enterprises. Notable today is Aerostich, a Duluth manufacturer of clothing and accessories for motorcyclists, founded in the early 1980s by Andy Goldfine, son of Monnie.

https://www.youtube.com/watch?v=wqzAuwJw4qI The latest from Duluth's Ingeborg von Agassiz is "a song for basement-dwellers and night owls."