Jim Richardson (aka Lake Superior Aquaman) May 17, 2022 No Comments Share 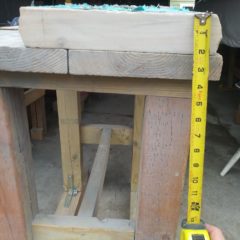 Following up on my project to communicate with the far future using stone or metal, I have produced the first piece: The “Sorry” Bowl. This was a collaboration with Sean MacManus/MacManus Stoneworks. Thinking of likely futures, I chose the word “sorry” because it’s what I really wanted to say. The rest of the story:

I still would like to prank future archeologists with wordy plaques that spin stories and so forth. Towards that end, I looked into local options for stone carving and metal work, and my messaging ideas got shorter and shorter to fit my budget. I started thinking in terms of single words, perhaps three words, each on a different stone that could be presented in any order. But what did I want to say?

Well, who is this project for? Stone will outlast me by an eon. Anyone who digs this up from the desertified lakebed in 10,000 years may in fact be owed an apology. I’m so intrigued by the notion that I want a triptych of sorrys, each on a different type and shape of stone, tripling the chances my message will get through.

I see Sean around and we brainstorm. A few years ago we explored concepts for an underwater sculpture garden/geocaching idea, abandoning it as unworkable unless we bolted stuff to the lake bed (and the lake would still probably eat it).

I’d kept him in the loop about the evolving words I wanted, with the idea of commissioning him to carve them for me. Finally I hit upon the “sorry” idea. I pictured the word on something like a plaque, and told him about it. He said he’d found a piece of stone buried in the woods in a stonemason’s refuse pile. It was some type of sandstone in the shape of a shallow bowl, and he’d been thinking it could use a word carved into it. I said yes, as one does in the face of fortuitous coincidences. And that was that.

Finished with beeswax, it is a sexy beast, suitable for display in a garden with its eternal apology for our fall. The fact that it’s an empty bowl resonates beyond what a plaque would have. The empty bowl symbolizes hope for abundance. I have such hope.

The bowl’s shallowness tempers that hope. It would not hold much water — perhaps enough for a bird to sip rain from as it raced evaporation. You could serve a small light salad on it. It could be used to present a handful of flowers to someone who needs to hear the word.

I have it sitting outside on my balcony. It doesn’t matter what I do with it. It’s not for me. I will die. Our houses will crumble. Lake Superior will drain away. Future archeologists might kill for a sip of clean water, or a small light salad. But all they will have is this empty bowl, and they will curse us.

https://www.youtube.com/watch?v=YhSpRAeiSYk Dorothy Molter was the last permanent resident of the Boundary Waters Canoe Area Wilderness. She sold candy bars and...