It’s been 36 years since Amtrak ended its 10-year run of passenger service from the Twin Cities to Duluth. This past week the company, which provides medium and long-distance service in the contiguous United States and nine Canadian cities, announced a vision for up to 30 new routes, including a return to Duluth … if Congress passes President Joe Biden’s $2-trillion infrastructure proposal.

Biden’s “American Jobs Plan” designates $80 billion for passenger and freight rail. Amtrak’s overall plan includes improving it Northeast Corridor — which has dozens of bridges, stations and tunnels that are in need of replacement or rehabilitation — and to “grow rail service and connect new city pairs across America,” providing “new and improved train service to millions of additional passengers” by expanding into “underserved communities across the nation.” Amtrak’s statement, released Wednesday, said the changes would “create jobs, improve the quality of life, reduce carbon emissions and generate economic growth.”

“Amtrak must rebuild and improve the Northeast Corridor and our National Network and expand our service to more of America,” Amtrak CEO Bill Flynn said in the statement. “Amtrak has a bold vision to bring energy-efficient, world-class intercity rail service to up to 160 new communities across the nation, as we also invest in our fleet and stations across the U.S. With this federal investment, Amtrak will create jobs and improve equity across cities, regions, and the entire country — and we are ready to deliver.” 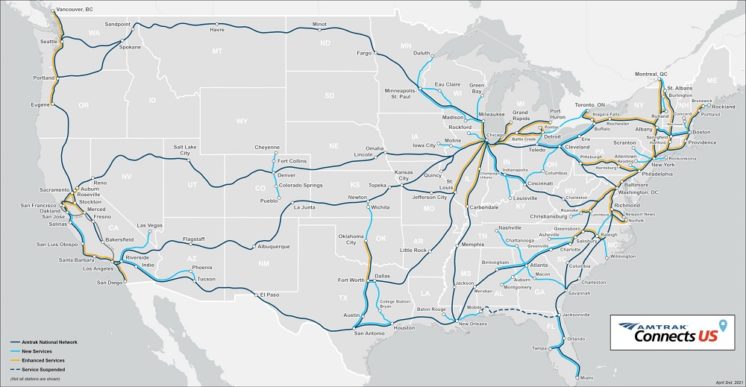 Amtrak operated a nearly 150-mile daily route connecting Duluth and Superior to the Twin Cities from 1975 to 1985. Initially known as the Arrowhead, the train service ended in Superior and passengers were loaded onto a bus for the final four miles to Duluth. Train service was extended to Duluth in 1977. The train averaged 48 miles per hour with several stops along the way, resulting in a more than three-and-a-half-hour trip.

The Arrowhead was replaced in 1978 by the North Star. Amtrak discontinued service to Duluth in April 1985.

For more about Amtrak’s potential return to Duluth, and how to it relates to the Minnesota Department of Transportation’s Northern Lights Express project, read the Minnesota Public Radio story “Passenger rail backers hope Biden’s infrastructure plan could return train service to Duluth.”