What’s in the box? A gift I’ll never open 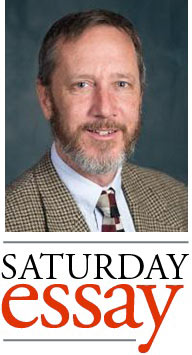 Someday, hopefully years from now, someone will face the task of going through all the “stuff” in my office and will find a box.
It is postmarked April 2, 2010. It has an address label on the side:

From: John Hatcher
To: Sam Cook

Here’s my request: Don’t open it.

If you simply have to know what’s in it, I can just tell you that part: It’s one of those sporty Nalgene water bottles. I can’t honestly remember what color or what style, but I do know it has a University of Minnesota Duluth logo on it. What the box contains isn’t why I’ve kept it unopened for nearly seven years now.

The water bottle was a gift, not to me but from me. The intended recipient was Sam Cook, longtime (that’s polite for old) journalist and columnist for the Duluth News Tribune. It was a way of thanking him for coming to my journalism class.

Sam has been a favorite guest speaker of my students over the years. In his writing and in person, Sam’s passion for the outdoors and storytelling is infectious. He often walks in carrying a garbage bag filled with his old reporter’s notebooks and spills them out across the table and says to the students, “Go ahead, take one.”

The notebooks are one of the tools Sam uses to illustrate to students how he constructs a story. He told me once that he likes to take the process apart for people. It’s one thing to marvel at the finished product of his carefully crafted stories. It’s another to begin to understand how those works have evolved from what are initially vague ideas and unintelligible scribblings in weathered notebooks.

By being completely candid about his own writing style, he helps aspiring writers begin to understand that writing requires hard work, careful observation and an obsession with detail. He will sometimes bring early drafts of stories to drive home the point that writing doesn’t get better without a willingness to be open to feedback and revision.

Every time I have heard Sam speak, I’ve come away with a desire to go out and write something myself because Sam, even after 37 years of reporting for the Duluth newspaper, still loves what he is doing and still feels like he has a lot to learn.

On the visit that prompted my gift, I was so inspired by his talk that I rushed to the campus bookstore to pick out a present that I mailed to him along with a thank-you card signed by the students. A few days had passed when I received an email from Sam that I also have saved.

Thanks a lot for the Nalgene bottle. I can’t, however, accept it. It’s just our policy here. Believe me, it’s been difficult to turn down packs, paddles, fishing tackle, etc. over the years. But know that I appreciate the thought and the thank-you note signed by your students.

I’m sending the bottle back in the box it came in. Hopefully, it’ll find its way to you.

As he notes, newspaper employees are not permitted to accept gifts of any kind from anyone. To do so, the logic goes, risks compromising the integrity of the journalist — his ability to go out into the world and gather information as a reporter who does not want there to even be the appearance of being influenced by favor. It’s even listed in the Society of Professional Journalists Code of Ethics.

Even so, my first thought about his decision to return the gift was that it was a bit silly. I couldn’t fathom how taking a gift from a grateful journalism class would influence anything that Sam Cook would ever write.

But for Sam, the line cannot be hazy. And, in fact, a few years later, I would become a source in one of his stories.

The same ethical standards that mean Sam will never think of accepting a gift have also been the same principles that explain, in part, why his work has resonated with such a diverse audience.

Sam Cook has the dream job: He tells the stories of the outdoors in northern Minnesota and Wisconsin. He gets to go hunting, fishing, fat-tire bike riding, skiing, canoeing. He gets to write about it. He gets paid to do it.

But in doing so, Sam also has to earn the respect of many different people. The characters who are in Sam Cook’s stories — and the people who faithfully read his stories—are different in so many political, social and cultural ways. What do turkey hunters, people working at a deer processing facility, fat-tire bike riders and surfers have in common?

Probably not a lot.

But they do share two things: One is a love of the outdoors. Another is a profound respect for Sam Cook.

So, now you know what’s inside that box and why I’ll never open it.

John Hatcher is an associate professor of journalism in the Department of Communication at the University of Minnesota Duluth.

It might seem too early to be thinking about fresh local vegetables. The growing season around Lake Superior doesn't generally...