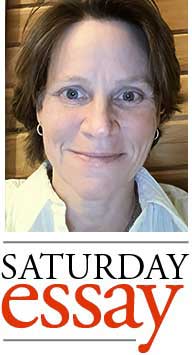 Early morning winter cold floods in through the gaps between the sheet and mattress. The cold is so powerful, so penetrating, I imagine it to be as fluid as a rushing river with the ability to seep into minute cracks and crevices. In the chaos of adjusting the comforter and pulling the pillow into my impromptu cocoon, my sleep-hat has gone AWOL. An instinctual desire to escape the cold and fortify the barrier makes me abandon any pursuit of the lost headpiece.

A new form of low temperature has erupted in Minnesota, a reverse volcano maybe. Not a temperature so high it melts rock, but one so powerfully low it could probably fracture silk. This kind of cold, the kind that cracks house rafters, and spiderwebs the smallest chip in a windshield, has blown in from the north. Weather enthusiasts call it a Polar Vortex — something about the North Pole, and cold, and pressure. But at five o’clock in the morning in northern Minnesota, those technical, and normally interesting, scientific truths can crawl into a snowbank as far as I am concerned. Whether it’s a vortex, or cyclone, or Voldemort’s Dementors unleashed, the only truth that encapsulates this moment is something I learned years ago: “cold is the absence of heat.”

The little cabin in Lakewood Township has no smoke billowing out of the chimney; that fire died hours ago. I assume any residual heat that is usually stored for long periods of time in the coals and cast iron has been transformed into stagnant electrons and protons. I imagine these microscopic particles huddled near each other like a school of fish in the deepest part of a lake, as still as shadows and just as silent. It is how I try to remain while inside my fleece sheet-comforter-all-encompassing-beaver dam. It is warm, and has a sauna-like effect from trapped humidity from expiration, but one careless body adjustment and the cold floods in reminding me this barrier is not sustainable.

It is almost a game though, a test of wills, a stubborn challenge I inevitably lose to restlessness and curiosity. I break the dam by extending my arm, flail my hand about to find the phone, then recoil the object like a raptor securing its prey. The glass and plastic link to the outside world is cold, my hand is cold, the new air is cold, and I’m worried I may have woken up with the soul of a drama queen. Google click, weather click, and instantly my fear of being a drama queen subsides: -6 ℉, with a feels like -28 ℉, and a wind speed of eighteen miles per hour. The absence of wood crackling and roaring in the fireplace leaves a space for the wind to auditorily take center stage. She rushes past making the cabin an instrument of sorts — her speed pushing out high-pitched flute sounds, then dying into an undulating and erratic clarinet, its dry reed squeaking a rhythmless cry. I cannot see her, not yet. The curtains, another barrier to the cold, are still drawn. But the center of me knows she is pushing trees down. She’s a force, this wind, and on this day, in early February, there is no confusing her with a July breeze rippling on the surface of a lake, or a September breeze gently pushing sparks into the night. No, this wind is altogether something different, something I don’t even want to describe, much less be encompassed by.

There is a truth in her power that is beyond captivating. To be captivating is to occupy the senses in an alluringly soothing way, in a way one enjoys or can feel in awe of. But this wind, attached to this cold, is all-consuming to the point of unsettling. There isn’t a tree, or road, or field she leaves untouched; and she leaves no option but to hunker, or hide, or layer clothing beyond comfortability. I restrain myself from calling her wicked, or evil, though these descriptions seem fair based on her intensity. But what makes me intrinsically fearful about this natural occurrence is the fact that it has no emotion, no purpose, no intention. If it did, we could debate or compromise, but that option is as possible as it is for me to venture outside and think if I stood in her path with fist raised she might concede, or at least calm her shit down a little.

I remain burrowed and focus on the sounds I am not captivated by, but consumed in, and give her a gender, a mission, a human existence. I personify her because, because … because I am human, and small, and frail? Maybe giving what sounds like a hurricane-force wind an identity makes it identifiable to my psyche, thus understandable. So I make her a scorned lover seeking destruction. Or a mythological Ice Queen, arrogant and awed by her own power. She is an unattached celestial entity aimlessly searching for her opposite — that salty Caribbean, low-intensity, drifting breeze that endlessly, and constantly, evades her.

Of course, the longer I lie here, the more evident it is that I must break from this cocoon and enter the world of a cabin growing colder, and two pups that have put off the inevitable as long as possible. Their nails click on the hardwood floor, the morning dance of impatient bladders and legs that need to stretch. With one last reluctant deep clench of the muscles, I throw open the covers, run to the door, open, out, shut, and quick to scamper back to the cocoon. Bravery to stop and build a fire was quickly doused. Once settled, I listen attentively for scratches at the door which I know will come quick. Of course, I hear the wind, but this time she is distant. She is wandering, still intense, but centered somewhere else. I imagine her, a stout, unkempt, creaky, old woman frantically rummaging around the woods looking for a lost potion or a button she misplaced a millennium ago. As she darts behind trees and flies over drifts of snow, she quietly mumbles to herself, but her voice echoes like she’s yelling into a canyon. Scratches at the door send a surge of urgency into my being. Bear and Shilo, my two brave pups, endured what I could not, though I know others, human and animal, are confronted by this ever-changing environment on a daily basis. On my way back to the cocoon, I build a fire and know I am lucky. I know the game of “how long can I be stubborn” is a luxury others do not possess. The furnace, which I don’t use, is a luxury as well. But though I have a sense of relief now that the fire has been lit, this wind, this witch, or entity, or simple Polar Vortex, consumes me, still. This unpredictable power to shift ice on a partially frozen lake the size of Lake Superior, one of the largest freshwater lakes in the world, then vanish leaving only remnants, astounds me. There are things in this world I simply cannot fathom: how a Lake Superior agate is 1.1 billion, with a b, years old, how a deer can hunker down and endure “feels like -28 ℉,” or how pressure from thousands of miles away builds to an intensity so massive, it can make my little cabin sound like a wind instrument.

From beneath the covers, I can hear the pleasant sound of wood crackling and finally feel air rich with heat. As my mind and emotions wake and get right with the world as it is, I can’t help but smile a little at the challenge living in Minnesota brings. Regardless if I comprehend low pressure systems, or how the North Pole funnels its wind, today I will suit up and venture into this weather just like many of my fellow Duluthians. We will ski Korkki, fish Island Lake, and ride our fat-tire bikes on the trails at Lester Park. We will snowmobile directly into this polar wind, stop for a beer at Billy’s Bar, and scoff at this celestial-witch entity without a fist raised. We will put dog booties on the pups and hit Piedmont with friends because coronavirus probably can’t survive three seconds in this negative whatever temperature accompanied by an even lower whatever wind chill.

The folks that reside in this Arrowhead region of Minnesota, along with one or two Cheeseheads maybe, will do more than survive, we will thrive, as we always do. And when the July breeze causes ripples on the water, or the September breeze pushes sparks into the dark, we will remember days like today and share a nod and a smile with the old witch. In turn, maybe she will give us a nod back and promise to go easy on us next season. One can hope, anyways. One can always hope. Via Instagram, select images of Lake Superior in wintry blue.