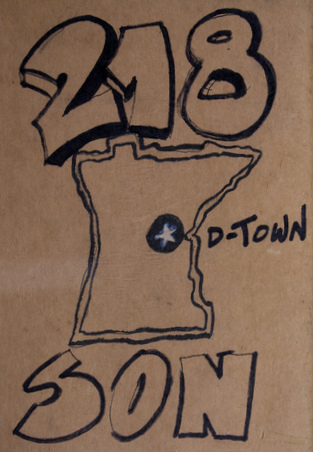 Daniel Levar was a Duluthian in Minneapolis at the time he submitted this sketchbook to the Brooklyn Art Library. I’m digging deeper into the online collection of Duluth-related Sketchbooks at the Brooklyn Art Library. About a year ago, Samantha Nielsen was subject of a Selective Focus on Perfect Duluth Day. She’s one of the Duluth artists in the Brooklyn Art Library. Brooklyn Art Library claims to hold the largest collection of sketchbooks in the world with more than 41,000 sketchbooks on shelves and more than 20,000 in a digital library. Some of them reference Duluth.

This week in Selective Focus, we hear from Ryan LeMahieu. If you click the images for a bigger view, you can better see the intricate line work in his drawings.

R.L.: my name is ryan lemahieu. i work mostly in mixed media but have a tendency to gravitate towards the black pen. you are nearly always able to find a pen and paper which is nice because art is how i deal with severe social anxiety with roots deep in depression. it is my release. i also think everything is better in black and white.

i have been working on developing a “style’ for close to 20 years. i feel like i maybe finally figuring it out.

Hell has frozen over, Eric Dubnicka has a blog!

Inspired by a previous post, and feeling a desperate need for external validation, I figured it’s about time to formally introduce my blog to the PDD community.

An angst-ridden New Years drove me to finally get a website going, and shockingly, I update it with new artwork near daily, commentary and links to art, design and oddities that I’ve come across.  It’s a work in progress and I encourage any comments and suggestions you may have.

Art Drawings and Sketches, Made in Duluth, Painting, Weird

On exhibit will be pen and ink drawings, preliminary performance sketches, and large line drawings. Purchase signed artwork for next to nothing, enjoy the reception (both evenings), and get a glimpse into the inner workings of an artist’s mind. More info.